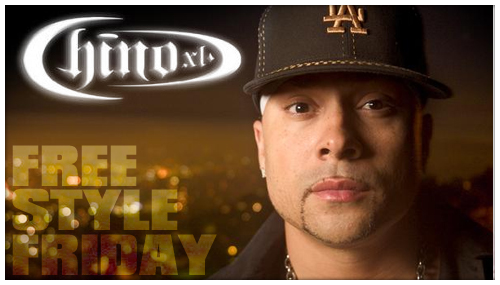 “I’m so rare, battlin’ Chino’s like Africa/ Yea, niggas talk about it, but they don’t really wanna go there”

Welcome the second installment of 2dopeboyz’ Freestyle Friday. This week, we’ve got Chino XL. Making his debut in ’96 with Here to Save Ya’ll, which has been noted as one of the better UG albums of the 90’s with a great mixture of vicious battle rhymes and conceptual tracks.

During one of his appearances on the legendary Wake Up Show, he spit a line [“in this rap game, I’m trying not to get fucked like Tupac in jail”] which caused Pac to respond on to what some thing of as the greatest diss track ever, (I don’t think so … at all) Hit Em Up [“Chino XL, fuck you too!”]. Chino responded with a freestyle but later they squashed the beef. I personally know people who haven’t given Chi a chance due to that alone, which is crazy! Check out the rest of the post for a few of my personal favorites, tracks with Royce Da 5’9″, Crooked I, Common and more.

Check out some of his tracks after the jump…

First is a track off his 2006 release, Poison Pen. This track displays such a raw sense of lyricism, I HAVE to post the lyrics…

DOWNLOAD: Chino XL – Wordsmith [lyrics to the verses alone below]

[Verse One]
Yo, yo, since born in my mama’s vaginal sauna
As a sono-gram, I’ve been fond of phonics
It’s ironic, even as an embryonic
Fed through an umbilical, don’t that sound biblical?
I’ve been a terror since I teareth out of the uterus
‘Cause evil plans were made to defeat us as a fetus
Though now I walk in infamy, as a child they had it in for me
Was raised with guns in infantry, in diapers and in infancy
The childhood of a hood, that was raised in the hood
Cops said, “Put your hands in the high sky”
I put my hands down on the hot hood
I can’t whine or drink wine, nine planets planned it
‘Til it became apparent, my parents shouldn’t have been a parent
State to state we ran some, I wasn’t worth no ransom
Money, won’t you hand some? A nigga wasn’t handsome
Raise the mind like Charles Manson’s
Knew I was some man’s son, but which one?
That made me strong, created my poison tongue

[Verse Two]
Why you cut school? ‘Cause you ain’t feel too good
I cut school ’cause my cuts ain’t heal too good
Through all the physical abuse my mind escaped through the gift of wordplay
I memorized encyclopaedias and dictionaries
I wrote anthems from antonyms, harmonies from homonyms
Created cinema from synonyms
Was livid to eliminate that illustrious life you livin’ in
Wrote rhetoricals in rhythms
I could paralyze with a parable, make rhymes out of religion
Crucify you with a prefix, or suffocate you with a suffix
Wrote lectures so infectious it’s known to infect the listeners
Who dissin’ us?
Yo punks you wait… I punctuate
My karma’s the comma
That puts you inside of a coma
Hyphen, dot, dot, semi-colon, leave you semi-swollen
Question mark, you pregnant?
Oh you’re not? I love you, period.
To sum it up, language is my essence
Fucked up in all my adolescence ’til my Moms was out of lessons
Laws: I store convenient
Still I rob a convenience store
Love Mom, Fuck Mom, shit I ain’t love me no more
Mentally it didn’t register, bitch
Empty the register, bitch
You just a cashier, bitch
Give the cash here, or I’ll shoot you in your cabbage
Hijack a getaway cab, bitch
Words ain’t makin’ me no loot, don’t change now Dow Jones average
Regardless, we Godless
They stole my innocence
In a sense, the judge sentenced me to three lifetimes sentences
To write my life and times and sentences
Art my dark archnemesis
They want me off the premises, that’s what the premise is
Locked on a tier where you can’t shed a tear at
Studied more Shakespeare than any African shakes a spear at
And the whole world fear that, and it hurts
I got caught killing time, but then I got with words

[Verse Three]
I’m in a game full of morons, and they keep putting more on
I tutor the Torah, I’m in the core of the Qu’aran
The mind’s what I represent, and emcees better re-present
I’m taking this rappin’ bullshit to the fullest extent
I have reservations why Indians are on reservations
Told that board of education I was bored of education
As far as this go I leave you deader than disco
Rocking sex and violence over sax and violins
Through your minds camera lens, you’re in need of an ambulance
I’ll knock you to the asphalt, it’s your own ass fault
Your last thought, I’ll never sell my self short to be famous
And taking it up the anus just ain’t us
The world could get the penis of this classical trained pianist
My P.O. was P.O.’d, handed a cup, told me to “pee in this”
The linguist musician, my college position is my intuition
Told me that I wouldn’t be affordin’ tuition
My education’s all on my own
So I might have been born yesterday, but I rhyme like there’s no tomorrow