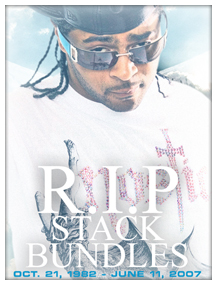 Damn, it’s hard to believe it’s already been a year since Stack was murdered. That’s crazy! I said it when he passed and I’ll say it again. I was one of the people who actually enjoyed dude’s music before he passed. I might not have followed up on dude as much when he started running with the Dips but when he was fucking with Budden, Fab, etc I was a big fan. As much as I’d like to I’ll refrain from calling out the people who jump on the deceased bandwagon just cause. Rest in Peace Rayquan Elliot! And while were at it, to the dopeboyz and dopegirlz out there who were fans. What tracks did you enjoy?