One Day As a Lion – Wild International 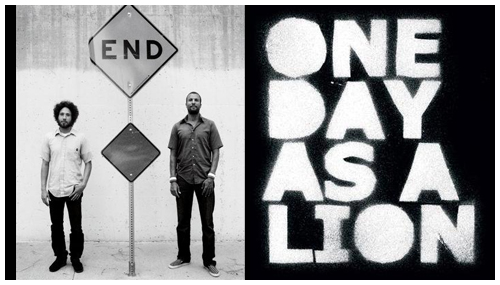 It’s better to live one day as a lion, than a thousand years as a lamb.

I’ve been hearing whispers and whatnot about One Day As a Lion, a collaborative project between RAGE’s Zach de la Rocha and Jon (former drummer of The Mars Volta). So to my surprise I see a post on OKP with the first leaked record from their upcoming EP. Shake’s a big fan of RAGE so it’s only right I make a post myself. Add that to the fact that this record is dope! Hit the jump for more info on the project as well as the tracklist. UPDATE: Added the CDQ version, courtesy of Flint.

One Day As A Lion is both a warning delivered and a promise kept.

A defiant affirmation of the possibilities that exist in the space between kick and snare. It’s a sonic reflection of the visceral tension between a picturesque fabricated cultural landscape, and the brutal socioeconomic realities it attempts to mask. One Day As A Lion is a recorded interaction between Zack de la Rocha and Jon Theodore from Los Angeles, California.

The name taken from the infamous 1970 black and white, captured by legendary Chicano photographer George Rodriguez featuring a center framed tag on a white wall in an unspecified section of Boyle Heights. It reads: ‘It’s better to live one day as a lion, than a thousand years as a lamb.’ This record is a stripped down attempt to realize this sentiment in sound.