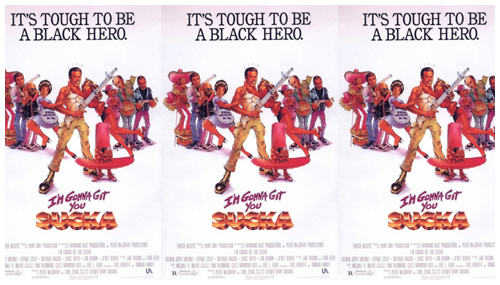 This was supposed to go up Friday, but for reasons unknown (fuck Atlantic Records) it wasn’t. Anyways, if you don’t have this movie in your collection I highly suggest you take two of deez and go play in traffic. This movie is filled with more quotables than a Big L notebook, and is one of my personal favorites. And as always, if you’re digging this, hit up Gangstarr Girl for a fresh take on hip-hop, politics, fashion and other worldly and wordy things through the eyes of a New York-helmed around-the-way girl. Without further adeiu…

Synopsis: Jack Spade (played by Wayans) returns from the army to his old ghetto neighborhood after his brother, Junebug, dies. Jack then declares war on those responsible leading him on a blundering trail of violence to Mr. Big, a powerful local crimelord (aka The Man). His army is led by John Slade, his childhood idol who used to fight bad guys in the 70s.

I remember seeing this movie for the first time when I was about 6 or 7 and thinking it was funny because it was so ridiculous. However, that was before I was actually into blaxploitation movies so I didn’t quite get it until I was a teenager. The first blaxploitation flick I remember watching is Friday Foster (when I was 12). My mother kept VHS tapes (remember those?) neatly stacked and labeled in the living room–and for the longest time, I’d quickly browse titles like Shaft, Sheba Baby and Superfly curious about the contents, but not interested enough to watch them because the titles were strange. One day boredum kicked in and I finally asked my mom about the movies with the weird titles. She explained to me about the blaxplotation era and how I’m Gonna Git You Sucka, (the movie that I watched so much as she said) was satirizing the genre.

Like everything excessive in pop culture, there comes a time when it must be made fun of. Keenen Ivory Wayans did it with love.

“I’m Gonna Git You Sucka was my hommage to the generation of films that I grew up on. Everybody had their John Waynes and Gary Coopers. That’s who those guys were to me,” said Wayans (taken from What it is…What it was–Hyperion Books). Fresh from co-writing Hollywood Shuffle with Robert Townsend, this flick was Wayans’ directorial debut. “I was able to have fun with some of the ridiculous and low budget nature of those movies. It was a great experience because I got to do a lot of things in one small movie.”

I was surprised to find out how many people actually liked blaxploitation flicks when I started this. Let’s face it, the movies are pretty cheesy, even for them being from the 60s/70s–and I def get a good laugh at the horrible dialogue, bad cinematography, “special affects,” stunt scenes, etc. But I think Wayan’s statement summed it up. Even for me, a whole decade later, it was nice to see movie heroes who looked like me.