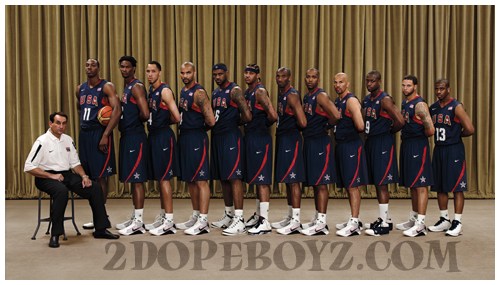 I’m making this post for two reasons. One to congratulate both the Men’s & Women’s USA Basketball teams for taking the gold in this years Olympics. The Men’s final game was really dope. I’m glad I stayed up to watch it. Talk about intense! Leave it up to Kobe to take over the 4th quarter though! Now onto reason 2. I used the image above for a reason. Anything seem weird to you (click for larger version)? Yes, Coach K is sitting down while his team is standing. And yes, the tall to small line up is messed up with Howard up front. But can you guess why those things are occurring? Hit the jump for some interesting details…

Here’s a hint: Guess who’s the one player on the USA Basketball team who isn’t sponsored by Nike. Yep, Dwight Howard.

Coach K is sitting. When a team stands, a coach normally stands. Why is this significant? Because Coach K’s left foot just happens to be blocking the adidas logo on Dwight Howard’s left foot.

Every player is in height order, with the exception of Dwight Howard and Chris Bosh … What does this allow for? It gives Howard an excuse to hold the ball and be the only player to not have his hand behind his back. This conveniently helps Howard cover the Nike logo on his shorts – SportsBiz

Nike claims that this was all pure coincidence, but you’d have to be a moron to believe that. This photo was clearly set up so both shoe companies blocked each other out.

Also let’s keep in mind Nike spends hundreds of millions of dollars on these guys and they sponsor USA basketball, so there’s no way they want another company’s shoe appearing in a picture like this.

By the way, you may be wondering then why Dwyane Wade, who wears Converse, doesn’t have his shoe covered. That’s because Nike bought Converse for $305 million in 2003.

There’s no hiding from this, Nike. You’re clearly guilty here, you greedy pigs.

All credit goes to my man Ron for showing me the link.