Quick hip-hop trivia: Hell Up In Harlem was supposed to be the original title of what eventually became No Way Out. Also, some of the more prominent hip-hop samples were found on the movie’s soundtrack. And as always, if you’re digging this, hit up Gangstarr Girl for a fresh take on hip-hop, politics, fashion and other worldly and wordy things through the eyes of a New York-helmed around-the-way girl. Without further adeiu…

Starring: Fred Williamson (a major star in the blaxploitation genre).

Synopsis: This sequel to Black Caesar begins with a badly wounded Tommy Gibbs–Harlem Mob boss–coming to after surviving an assassination attempt orchestrated by a corrupt district attorney. As Tommy tries to rebuild his empire, he’s plagued by the murders of his father and estranged ex-wife. Thus, going on a rampage of vengeance–creating “hell up in Harlem.” 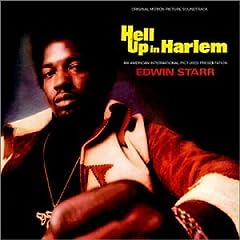 Soul singer, Edwin Starr did the soundtrack. This album wasn’t as popular as the James Brown scored soundtrack for Black Caesar. The theory is that because the Hell Up in Harlem soundtrack marked Starr’s last album with Motown, the promotion was lackadaisical. According to www.allmusic.com, the two singles released were “Hell Up in Harlem,” and “Big Papa” (no musical relation to the Biggie song), but they didn’t blow up the way they should have.

In case you need a refresher for what the Black Caesar soundtrack sounded like, here is the lead single (sampled for Nas’ 2002 album, God’s Son on “Get Down”):

P.S. Let me know if anything was sampled from the Hell Up in Harlem soundtrack cuz I can’t think of anything.