This particular entry has got to be one of the doofiest blaxploitation I’ve seen thus far. But that’s what happens when everything goes during the era. And as always, if you’re digging this, hit up Gangstarr Girl for a fresh take on hip-hop, politics, fashion and other worldly and wordy things through the eyes of a New York-helmed around-the-way girl. Without further adeiu…

Synopsis: Abby Williams was a good Christian housewife and marriage counselor full of love and life until she was possessed by the spirit of a demon of sexuality, after her father in law, an archeology professor and exorcist, accidentally freed it while in Nigeria. He returns home and performs an exorcism on her with help from his son and her good friend. 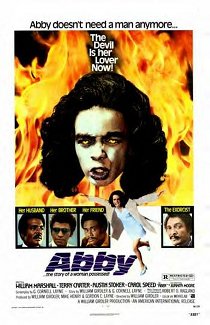 Facts: Abby is one of the most sought after films by horror connoisseurs around the world because it’s rare. It never received a lengthy theatrical run upon its 1974 release and barely saw video distribution. This was because Warner Bros. railroaded the flick. Having released William Friedkin’s The Exorcist earlier that year, WB insisted that Abby was a blatant rip off.

American International Pictures, Abby’s distributors, succumbed to the pressure and pulled the film from theaters after a very short run. Abby is actually an original take on exorcism–a topic that is open to interpretation by anyone–but because WB was the bigger company, they were able to crush their competition.

Coincidentally, William Marshall, the man who played Abby’s father-in-law, is the same actor who played “Blacula.” He was not exactly thrilled with the way Abby poorly dabbled in African folklore.

“I wasn’t pleased with Abby because of the overall script…It was a disappointing experience because the screenwriters had insufficient craftmanship and knowledge about Africa to create either a rich character or a distinctive story,” he said (in an interview for dvd bonus features).
He actually did have a point. There are a lot of inconsistencies and inaccuracies in reference to what Marshall talked about but you can see the movie and decide for yourself.

However, the writers and producers weren’t that out of touch because they vetoed the original plan to call the flick “The Blackorcist.” I’m glad they realized how corny and not a smart a move that would have been.

Overall, this film actually wasn’t that bad. (And that says a lot not only for movies from this genre, but also this era). Compared to it’s counterpart, The Exorcist, it’s a decent alternative.