You already know. We’ve been saying it since jump. NMC is taking over and Duck Down Records knows what’s up as they decided to team up with us to release the latest mixtape from their camp. The Prelude, which serves as an appetizer to his upcoming solo debut Sean Price Presents… Ruste Juxx – Indestructable, which drops October 28th! 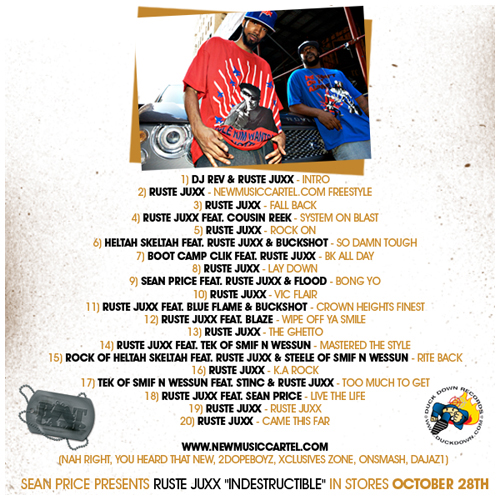 Ruste Juxx is the newest sensation coming out of Crown Heights Brooklyn. After several years of collaborating on Duck Down Record’s and Boot Camp Clik releases, Ruste Juxx is poised to release his first solo album: “SEAN PRICE PRESENTS RUSTE JUXX INDESTRUCTIBLE,” in stores October 28th. The album features production from Black Milk, Dan The Man, and PF Cuttin. Executive-Produced by Sean Price, Dru Ha & Buckshot, the project is a creative mix of tough street music, with a blend of smoke right, and party right tracks. Ruste Juxx is featured in next month’s XXL SHOW N PROOVE and in Source Magazine. Catch him live in your backyard with Sean Price & ILL BILL for their 54-City North American Tour.