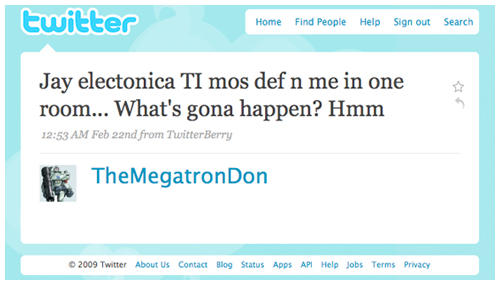 Geeeez…last Tuesday, Just Blaze let loose of some gems! While on Tony Touch’s Toca Tuesday radio show, Just played some snippets featuring Mos Def & Jay Electronica. As you can see by the Twitter message above, Clifford was in the studio as well. I expect nothing but greatness. Big shouts to YN on the rippage, and Dre for the link (I’m lazy today). Since Talib’s speaking throughout… I’ve gotta say both his upcoming projects have me hyped! Reflection Eternal & Liberation 2.