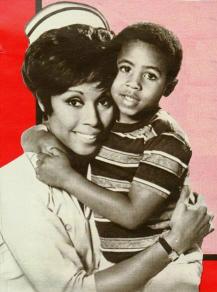 And as always, if you’re digging this, hit up Gangstarr Girl for a fresh take on hip-hop, politics, fashion and other worldly and wordy things through the eyes of a New York-helmed around-the-way girl. Without further adeiu…

I blog for Stay Tuned, a TV blog over at BET.com and featured Diahann Carroll a couple of days ago, for her role in Julia, in honor of Women’s History Month. Carroll played Julia Baker, a widowed nurse raising her song alone (in Los Angeles) after her husband was killed in Vietnam.

CLICK HERE for more about Julia on Stay Tuned.