How Phife Dawg Changed My Life 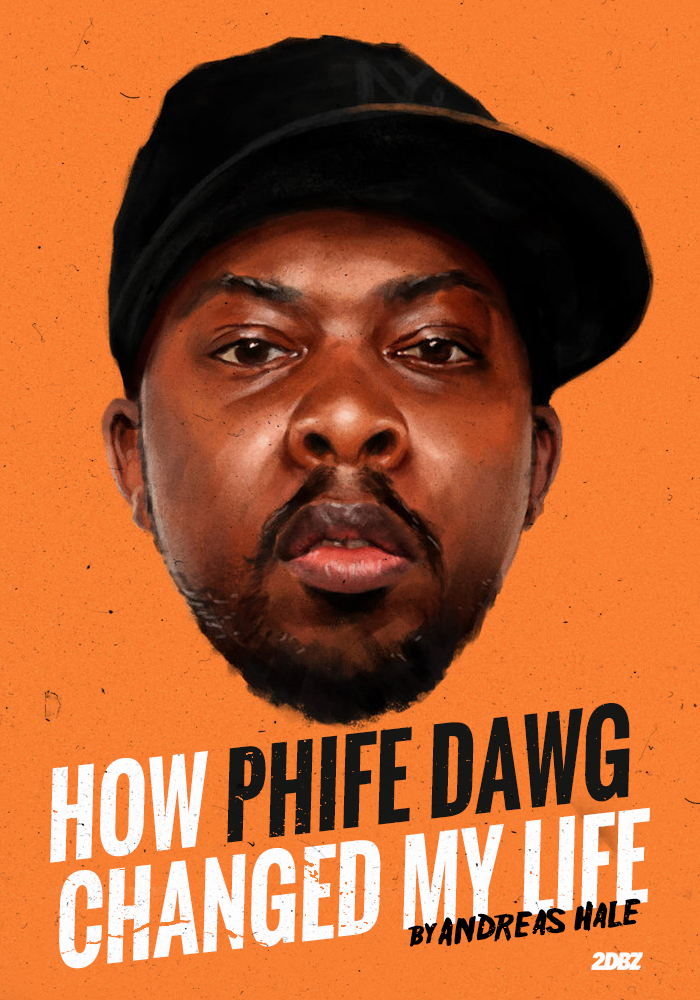 I had planned on launching a new column on 2DBZ tentatively titled “Unpopular Opinion” where I’d explain a viewpoint in hip hop that may not be universally accepted. For my first entry, I was teetering between two subjects. The first being Just Blaze outshined Kanye West on The Blueprint and the second was about Phife being the reason why I adored A Tribe Called Quest.

With the unfortunate news Malik Isaac Taylor has passed away at the age of 45, my hand will be forced to tackle the topic from a different perspective. Instead, it will be a retrospective on the career of an emcee that I wholeheartedly believe was severely underrated for his contributions to hip hop.

I’m not going to deliver a run of the mill retrospective that discusses the bullet points of his career. You can find that elsewhere. This is about how Phife Dawg impacted my life. It won’t be eloquently written because I’m still struggling with the idea that Phife is no longer with us. So excuse me if it comes off disjointed and longwinded but I need to get this off of my chest.

In the 1992 movie “White Men Can’t Jump” there was an exchange between Billy Hoyle and Sidney Dean where Dean told his white hoops partner that there was a difference between “listening” and “hearing” music. It went a little something like this:

“Look man, you can listen to Jimi (Hendrix) but you can’t hear him. There’s a difference man. Just because you’re listening to him doesn’t mean you’re hearing him.”

That conversation has always carried a lot of weight with me and I often will refer to it in hip hop conversations because there really is a difference between casually listening to something and letting music sink deep into your soul.

Phife Dawg is the reason why I began to hear hip hop differently.

As a pre-teen, I loved hip hop but the complexity of lyrics wasn’t something I paid much attention to. I was too young to truly understand the poetry of Rakim and emcees like Chuck D and KRS One were more responsible for dropping names and referring to subjects that I would dive into books to figure out their significance. When I first heard A Tribe Called Quest, I was instantly drawn in by the jazz samples. I was moved by the production of People’s Instinctive Travels and the Paths of Rhythm and immediately became a fan. Then The Low End Theory dropped and the concept of punchlines, wordplay and metaphors took my appreciation of hip hop to another stratosphere.

But it wasn’t because of Q-Tip. Phife Dawg singlehandedly hit me over the head with savage punchlines that made me laugh out loud and piqued my curiosity of how a mind could work in that manner.

Still too young to buy music on my own, I stayed glued to Yo! MTV Raps with my fingers hovering over the record button on my VHS so I could capture A Tribe Called Quest video on my tape. And when I did, I would punish the rewind button so I could learn the lyrics. “Check the Rhime” was dope, but then I saw the video for “Jazz (We’ve Got)” and I lost my mind.

The “Green Dolphin Street” sample hooked me but after Q-Tip’s second verse when Ali replies to Tip’s “check it out” with “check what out?” and Phife jumps in with “yo, check this out,” little did I know that my young mind was about to be blown. The video shifts from black and white to full color as Phife appears rocking a yellow crewneck and eye caps and proceeds to deliver the first verse of “Buggin Out.”

“I sport New Balance sneakers to avoid a narrow path
Mess around with this you catch a size eight up your {​ass}​
I never half step cause I’m not a half stepper
Drink a lot of soda so they call me Dr. Pepper”

My brain exploded. Partially because I was young and silly so the idea that you could drink so much soda and be called “Dr. Pepper” was hilarious to me. The other part was that I was instantly curious how Phife came up with the idea that rocking a pair of New Balance sneakers would keep him from the narrow path. Back then it was all about Nike and Adidas so I was instantly curious why Phife chose New Balances as his sneaker of choice. Then it dawned on me that he didn’t want to be like everyone else.

But that wasn’t the moment that changed my perception of lyricism. It would come when Phife delivered his verse on “Scenario” that forever changed how I would grade every emcee for the rest of my life.

I don’t need to explain how “Scenario” is the best posse cut of all time and the video epitomizes all things hip hop. You can go to Grantland to read that. But, for me, it was all about Phife setting that song off with one of my favorite verses of all-time. In all honesty, without Phife batting leadoff, there wouldn’t be an opportunity for Busta Rhymes to clear the bases with his grand slam finale.

First of all, he references Bo Jackson, who was like a God to me because he was unstoppable in Tecmo Bowl, tore the cover off the ball in baseball and had those classic “Bo Knows” commercials. Bo could do everything! But you know what Bo Jackson can’t do? Rap! And that’s how Phife sets “Scenario” off. I was in from that point on. But the gut punch had yet to come.

“I’m all that and then some, short, dark, and handsome
Bust a nut inside your eye, to show you where I come from”

To this day, I’m only impressed by emcees who say things that I couldn’t think of. If I could have written it, I’m not all that intrigued. But the whole preposterous idea of ejaculating in somebody’s eyeball so they can see where you come from was next level poetry. I laughed for hours, days, weeks and months. I recited the line to anybody that dared to listen to me and then explained the brilliance of it. I started writing my first raps filled with preposterous punchlines because of it. One of the first rhymes I ever wrote titled “The Fist of the North Star” had the following bars:

As you can see, Phife Dawg influenced all of that. Obviously, my idea of becoming the next big thing in hip hop was short lived but Phife was always a part of shaping my identity as a writer. But this wouldn’t be the last time that Phife would affect my perception of hip hop.

I became extremely defensive of Phife over the years and would argue with anyone within an earshot that he was just as important to Tribe as Q-Tip. My argument was that Q-Tip was mostly about the voice and Phife was the more clever battle rapper. And I liked battle rappers. You had to have thunder with the lightning. Phife and Q-Tip were perfect together. But if you asked me, I’d always side with Phife because he was the underdog.

Years later, I would attend Morehouse College and still had dreams of becoming an emcee. I had a little crew and we’d write rhymes and hope to be heard. One day I was hanging out on the campus of Clark Atlanta University and an impromptu cypher broke out. I was shy but determined to finally set foot in the circle of emcees to show them what I had. I waited for the cat who many considered to be the illest freestyler to wrap up his verse so I could jump in because that would be my make or break moment.

However, my idea was interrupted when a midget with a backpack hopped the wall and jumped ahead of me. With his ball cap covering his eyes, the little guy began tearing down the cypher. I was thrown off and a little annoyed that he came out of nowhere to disrupt my plans of verbal domination. But then I noticed the voice and the image of Phife Dawg came into focus.

Holy shit, Phife Dawg was in our cypher and annihilating it!

I don’t remember a gotdamn thing he said but I was blown away that an emcee of his caliber would show up and rhyme with a bunch of college kids. When he was done, so were my dreams because who in the hell wants to rhyme after Phife? After he was finished spitting, he dapped us up and departed in a mystic cloud of smoke. Or, at least that’s how my mind chooses to remember that moment.

When I left college and moved back to Las Vegas, one of the places that I frequented regularly online and off was HipHopSite.com. One of the first CDs I purchased from the store just so happened to be Phife’s solo album Ventilation: Da LP. Although the album wasn’t the classic I hoped it would be, it did yield a pair of songs produced by J Dilla that made me double back and buy everything that the producer touched: “Bend Ova” and “4 Horsemen (192 N’ It).” Phife was responsible for my love of Tribe and Tribe introduced me to Dilla.

I fell in love with HipHopSite because it was the only place I could find this solo album that I was desperately looking for and everything that stemmed from it. My adoration of HipHopSite eventually led me to write reviews for them as my very first real writing gig in the early 2000s. Fast forward over a decade later and here I am.

In a strange way, I owe it all to Phife Dawg. Without him, I wouldn’t “hear” hip hop the way I did. I wrote differently because of him. I analyzed emcees in a different light because of him

That’s the reason why I had to stop everything I was doing to write this column. I have a plethora of assignments that I need to finish. But upon hearing about the passing of Phife, there was absolutely no way that I could do anything else but write this column.

I was upset when Tribe disbanded and elated when they reunited and I got to see them perform in Vegas. I couldn’t wait to see the documentary Beats, Rhymes & Life: The Travels of a Tribe Called Quest so I could better understand the dynamics of the breakup. I was saddened to learn that Phife had Type 1 diabetes and thought it was unfair that he had to have those health issues. I always kept tabs on Phife because he was indirectly responsible for shaping my view of hip hop.

Oftentimes, people don’t realize just how much impact they have on someone else’s life. Unfortunately, I will never get the opportunity to tell Phife how he affected me. I always figured that one day we’d cross paths and I’d get to have that conversation with him. But now he’s gone and so is a big part of my childhood. Obviously, I don’t feel it like those close to him and would never dare say that I understand what they are going though. However, I hope this column illustrates that this writer will sorely miss him.