For instance, the #1 story this month, unfortunately, is the passing of Phife Dawg. We’ll link you to all content related to his passing as a means to catch you up on everything. The recent onslaught of music from Royce Da 5’9″ certainly deserves a spot on the list as well.

And just to see which artists keep up their momentum, we’ll keep a running tally of how long they’ve been on the list and their previous rank.

With all that being said, here’s The Re-Up for the month of March. The hip hop world lost one of its most underappreciated emcees in Malik Izaak Taylor, better known to us as Phife Dawg of A Tribe Called Quest. The Five Foot Assassin lost his 16 year battle with diabetes and taken away from the world at the far too young age of 45. Although gone, we can never, ever forget the impact that Phife had on hip hop culture as part of one of the most influential rap groups of all time. I don’t really know much about Bankroll Fresh. I can honestly say that if you had put him, Peewee Longway, and any member of Travis Porter in a lineup together, I could not pick either one correctly. And aside from a handful of songs (primarily, “Hot Boy” and “Walked In”) I admittedly did not follow his career much. Back in February, we warned you that Kendrick Lamar had some rounds in the chamber that he planned to unleash during various live performances. His stellar performance at The Grammys had everyone talking. But it would be LeBron James that pushed the button that forced that hand of TDE to release a collection of songs that didn’t make the final cut of To Pimp A Butterfly. With Top Dawg letting the masses know that a new TDE release was on its way, we all speculated until the Untitled, Unmastered EP blindsided us all. Kanye West’s haphazard release of The Life Of Pablo may have set the streaming world on fire (according to Tidal, at least), but the reviews were mixed on Mr. West’s studio album that we aren’t really sure if it’s done or not. Every time we turn around there’s an album-cut being reworked or a new song being released. We’re still talking about it, just not sure exactly what we’re talking about anymore.

RELATED: Kanye’s TLOP Is A Chaotic Ride Through A Madman’s Mind
• TLOP Is Now Available On Apple Music & Spotify Metro Boomin is a busy man these days. Whether he’s producing songs for Ty Dolla $ign, interviewing with Nardwuar or lending beats to Kanye West’s latest album, Young Metro is having his moment in the sun. But what’s a producer without a drop? Yeah, Mr. Boomin became official once “If Young Metro don’t trust you I’m gon’ shoot you” spawned a bevy of memes. But where does he rank on the greatest producer drops of all-time? A sober Royce 5’9” has proved to be a frighteningly impressive one. Not like Nickel hasn’t always been one of the finest on the mic, but his forthcoming album LAYERS is going to give us a glimpse into the life of a man that very few of us have been aware of. His interview with Complex, lead single and subsequent EP have kept Royce in heavy rotation with the train not stopping anytime soon. There was pretty much no way that Macklemore could duplicate the success of The Heist. No matter what Macklemore did, whether it would be calling upon the legends of hip hop or dropping a song that addresses white privilege, it wouldn’t matter as the vitriol toward him was simply too much to overcome. But maybe fading into the background is the best thing for him at this point in his career.

RELATED: This Unruly & Inexplicable Hate For Macklemore We’ve Made Troy Ave crossed the line when he decided to mock Capital Steeze’s suicide in a recent diss track. Joey remained silent on the issue to the point that we wondered whether he’d simply just let this one slide because it wasn’t worth his time. Welp, that wasn’t happening as the Pro Era emcee took to Sway In The Morning and unleashed an entire batch of venom on Harry Powder. We’re not sure that Troy should even attempt to come back from this one because it’s highly likely that there’s a lot more where that came from. This feud pains us. A legendary director who changed cinema forever and a young, talented emcee who is expected to be the next big thing are at odds with no end in sight. It all started with Chance being offended by the depiction of his hometown of Chicago in Lee’s film Chi-Raq. Even though the movie is already streaming on Amazon, the beef is still above room temperature as Chano unleashed another round of jabs toward the director on Twitter. Somebody needs to step in and squash this. It’s evident from listening to Elzhi’s Lead Poison album that the Detroit emcee has been going through it over the past few years. Fortunately, the music has proven to be therapeutic for the former Slum Village member as he bled his entire soul on this new album. For those of us who can relate, this is certainly an album that reminds us that we’re not the only ones going through something. 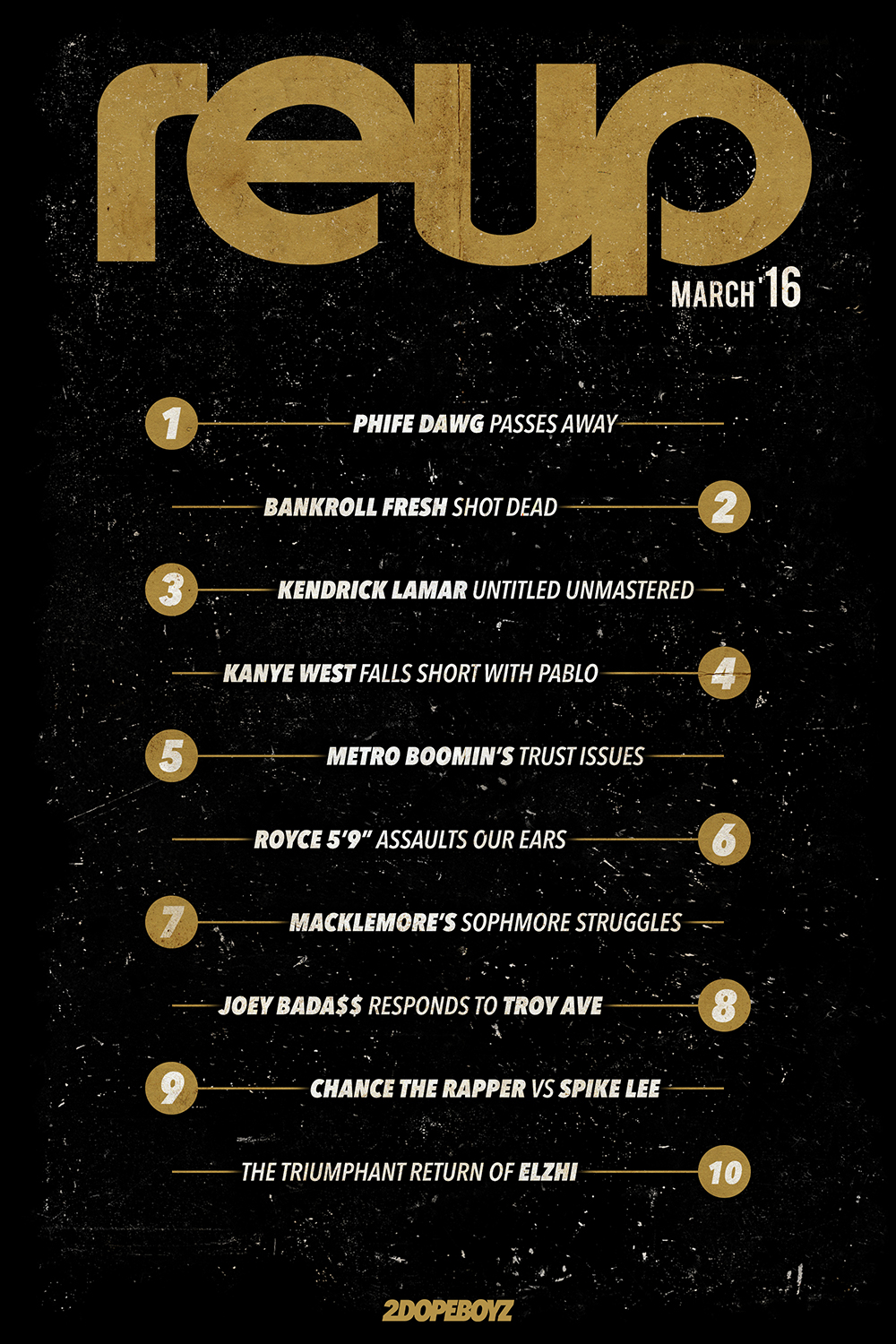