They went from bellowing “what a time to be alive to one of them pulling a Stevie J. and “not recalling” that the album was ever made. However, at this point it’s virtually impossible to to not throw Drake and Future into the same conversation together. And, thanks to GQ, they’ve been connected once again in another facet: their fashion game.

Gentlemen’s Quarterly unveiled their list of who they deem are the “Most Stylish Men In The World Right Now,” and among the likes of actor Idris Elba and NY Giants’ Odell Beckham Jr. both Aubrey and Nayvadius were named to the list. While Drake was credited as “The Coziest Baller,” Future was crowned “Lord Of The Brim” due to his penchant for high-end hat-wear.

As such, the two also “graced” the cover of the magazine as well. Wide-brimmed hats are to the slurring, swerving Atlanta rapper born Nayvadius Wilburn what white suits are to Tom Wolfe: an instantly recognizable daily uniform. Look closely at these three and you’ll notice they’re all the same basic style. They’ve got the teardrop crown of a traditional fedora, and the brims have an Outback flair. “They were definitely considered an old guy’s hat until Future started wearing them,” says Marc Williamson, proprietor of FlameKeepers Hat Club in Harlem. “Now we get plenty of calls from guys wanting the ‘Future hat.’ ” That’s because context is everything. Future wears his geezer hats like a hipster, turning them into streetwear. “It’s a look that’s enhanced by just a leather jacket or a T-shirt,” Williamson says. “And that’s how Future gets down.” For a certain type of rich guy, luxury means comfort. It means clothes that fit loose, so as not to constrict the swag. Clothes that look appropriate for watching, or even playing, sports. Dressing this way is a power move. It says: I can get in anywhere without so much as a collared shirt, because I am me. Drake plays this look to the hilt. He likes it so much that he started his own line—OVO, full of cotton tees, fleece sweatshirts, and sporty jackets—seemingly just so he’d have more stuff to wear himself.

SHAKE EDIT: Wait… how the hell is Russell Westbrook on this list?! 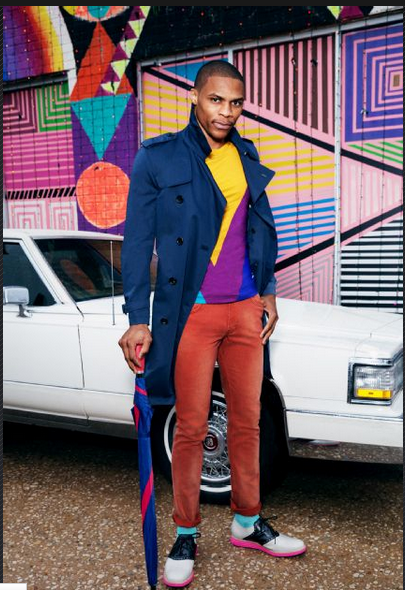