What a damn time.

With Drake‘s Views From The 6 dropping Friday, the OVO Sound leader is building the hype for his album day by day. Sunday night, Drake shared the project’s (odd?) artwork, and today, he revealed he’s going on tour with Future this summer.

The Summer Sixteen Tour will start in Austin, Texas on July 20 and will span a total of 32 dates before completing in Vancouver, BC, Canada. Roy Woods, DVSN and other “special guests” will join the What A Time To Be Alive collaborators on tour.

Tickets for the tour go on sale this Friday (April 29) at 10 a.m. on Ticketmaster. Drake also announced the 7th Annual OVO Fest, which takes place in Drizzy’s hometown of Toronto every year. The 2016 festival will feature Snoop Dogg and Wiz Khalifa, who themselves are going on a joint tour this summer, too, and will take place on July 31 and August 1.

Last year’s OVO Fest was pretty memorable. After a bit of back and forth between Drake and Meek Mill, Drake performed “Back 2 Back” while plastering meme after meme on the screen behind him, essentially ending the beef for a couple months.

Check out more details for the festival below. UPDATE (5/20): By popular demand, more dates have been added. 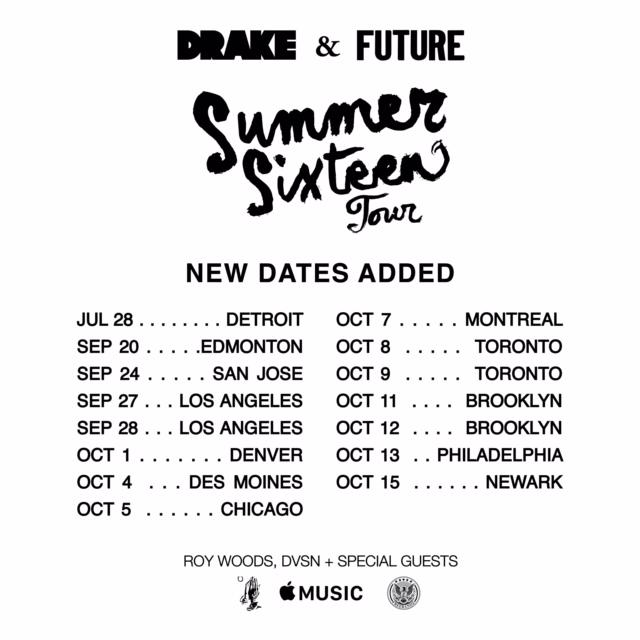 Eearz – “Ride Shotgun” (prod. Mike WiLL Made It)