For instance, the #1 story this month revolves around Chance the Rapper’s Coloring Book. We’ll link you to all content related to the Chicago native’s rise to catch you up on everything. Gucci Mane’s return and Troy Ave’s exit also land in the top spots as well.

With that being said, here’s The Re-Up for the month of May. When you think of Gospel Rap, you normally think of songs that are devoid of curse words or anything that could be deemed as sinful. However, a vast majority of the God-fearing individuals roaming the earth aren’t free of sin. And Chance The Rapper has made the album for you.

With a top heavy 2016 already in the books that featured the likes of Drake, Beyonce, Kanye West, Kendrick Lamar, Rihanna and others, Chance The Rapper had the opportunity to make his presence felt among giants. Coloring Book did exactly that while also redefining a genre. It’s hard to call this project anything but a success. He released it for free and allowed the masses to crowd the bandwagon if they hadn’t already. But, perhaps more importantly, it was a damn good project. Not only was it an excellent album, but elements of his album seem to have had a heavy influence on the creation of Kanye West’s The Life Of Pablo.

RELATED: The Gospel According to Chancelor Bennett

So the fact that Chance can influence the man who influenced him heavily as a 4th grader to become a rapper is kind of a big deal and speaks to the quality of music coming from this generation of emcees. — Andreas Hale Who cares how many records Troy Ave may have sold. Who cares about his perceived overly confident nature. Who cares about his lyrical back-and-forth with Joey Bada$$. None of that matters now, after a shootout at Irving Plaza on Wednesday, May 25th left bullets in Troy and two innocent bystanders, and left Ronald McPhatter dead. Even worse, Troy has now been charged with attempted murder and two counts of criminal possession of a weapon, and could possibly face a murder charge for the death of one of his closest friends, and at the time of this piece remains in jail being held without bail. Nothing else matters now. — Meka Udoh When summer breaks in New York, curiosity piques as to who will deliver that joint that will set The Big Apple on fire. Well, to the surprise of some, it came in the form of the Fat Joe and Remy Ma collaboration with French Montana “All The Way Up.” And while the song was a heat rock on it’s own, the inclusion of Jay Z on the remix (who seems to ALWAYS sniff out the best songs to jump on) took it to the proverbial next level.

Hov set things off with a nod to Guru’s legendary line on “DWYCK” about Lemonade and winks to his wife’s album that turned the industry upside down. From there it is all braggadocio about how he uses his Grammys to pour his D’usse, his daughter bathing in gold like Tupac and salutes the late, great Prince by touching on a line The Purple One said in “Let’s Go Crazy.”

But that wasn’t all.

Then Remy Ma came and absolutely murked the song while sending something that’s a little more violent than a warning shot toward every single female rapper jockeying to be the best.

That’s how you make a hit. — Andreas Hale Gautama Buddha. Muḥammad ibn ʿAbdullāh. Radric Davis. You’d be surprised how much these three have in common.

All three are followed by legions of men and women worldwide. All three have, arguably, shifted entire cultures. And all three are worshipped as deities, and have spawned many disciples. So, imagine the rap world’s surprise when Davis, née Gucci Mane, returned home from an extended, government-sponsored vacation in an Atlanta prison cell where he’d spent the last three years (surprising everyone by getting out a few months ahead of his expected September release date), fans worldwide rejoiced as if they witnessed Matthew 17:23 (or is it Luke 18:33?) happen in real life.

RELATED: Gucci Mane – “First Day Out Tha Feds” (prod. Mike WiLL Made It)

Hopefully, Gucci can continue to turn his luck around for the better. — Meka Udoh The Golden State Warriors record breaking season was put into the blender of the NBA Playoffs and resulted in a road that was less than optimal for the defending champs to return to the NBA Finals. An injury to unanimous MVP Steph Curry kept him out of action for a total of six games and forced the Warriors to cope without their superstar. Although they managed to get through the first two rounds relatively unscathed, an Oklahoma City Thunder team that had just beaten the San Antonio Spurs wouldn’t roll over without a fight.

After four games, the Warriors were on the brink of elimination due to a pair of demolitions at the hands of KOC and social media went into full hyperbole mode as they questioned whether Curry was as good as advertised when it mattered most. So the 73-9 Warriors went back to Oracle, bounced the Thunder in game five with Chef Curry chewing them up for 31 while shouting “We’re not going home.” But the real test was game six where the Thunder had home court advantage. But that didn’t matter as Splash Brother Klay Thompson put down a NBA playoff record 11 triples and sent the series to a game seven back in Golden State.

Everyone that had written the Warriors off was now warming up their crow in the oven to eat later. Game 7 was when Curry put the team in his Jansport and carried them to another NBA Finals with a scintillating 36 points and a late 3-point dagger that was of the disrespectful variety. All that Curry slander turned to praise hands and we’re all set for what could be an epic NBA Finals against a full strength Cleveland Cavs team that is salivating for and NBA title. — Andreas Hale

No matter what you think about Drake’s fourth studio album, the fact is that the 6 God completely owned the attention of the industry and it hasn’t slowed down one bit. The Toronto artist has been clobbering everything in its sight, clocking in a ton of sales and streams, dancing awkwardly for his SNL appearance and performing at the birthday party for Floyd Mayweather’s daughter for what we can only imagine to be a ridiculous amount of loot. And a month later it’s still resonating with the public. Views is still #1, “One Dance” is holding it down on the top of the Billboard Hot 100 (with a Justin Bieber remix that is sure to give it yet another boost) and there is nothing that is keeping Drizzy from owning the summer.

The only thing that he failed at was getting his Toronto Raptors into the NBA Finals. But something tells me that he’ll get over it. — Andreas Hale Fat Joe may have shed the weight that inspired his rap moniker years ago, but he’s eating just as well as ever with his and Remy Ma’s hit single “All The Way Up”—which rang so many bells that it inspired JAY Z to come off of his yearlong hiatus and contribute to its remix. However, Joseph Cartegena made headlines for an entirely different reason when he was a guest on ESPN’s Highly Questionable. While with Dan Le Batard, Bomani Jones, and Papi, he answered the trio’s most pressing question of all time: the identity of the New York Knick The Notorious B.I.G. rapped about on his 1997 classic “I Got A Story To Tell.” The answer surprised everyone: Anthony Mason.

RELATED: S2T: A Recreation of Biggie’s “I Got A Story To Tell”

It was unbelievable at first: Mason was one of the greatest NBA goons of all time, so it’s difficult to comprehend that Biggie — a heavyweight in his own right — brang-dang-danged his girlfriend, then robbed him afterwards. However, Puff Daddy would later come out and corroborate the story, and one of the great rap myths of all time was ultimately busted. — Meka Udoh At this point Justin Timberlake doesn’t have to put out another single song to earn a buck, as he’s already done so millions of times over. But when word got out that he would be dropping his first set of new tunes since his 2013 album(s) The 20/20 Experience, as well as photos surfacing with him and Justified co-conspirator Pharrell Williams in the studio, the anticipation for his return instantly reached a fever pitch. The end result was “Can’t Stop The Feeling,” a Max Martin-produced jam molded in the same visage as Pharrell’s instant vintage “Happy,” which quickly shot to No. 1 on the Billboard charts and dethroned both Desiigner’s “Panda” and Drake’s “One Dance” in one fell swoop. Expect to hear thing song all throughout cookout season, and then some. — Meka Udoh Almost lost in the midst of the Chance The Rapper madness was ScHoolboy Q dropping a new joint from his forthcoming album. But it wasn’t just any song, it came with the assistance of Kanye West. After Mr. West tweeted “Get Top Dawg on the phone!” in a nod to the line from Kendrick Lamar’s Untitled/Unmastered EP, TDE fired off “That Part” right in the middle of the net going wild for Chance’s album. Good marketing strategy or not, “That Part” is an undeniable banger and a very interesting pairing between the two artists. Still no word on when Q’s new album will drop but it’s going to definitely be a hot summer. Whether or not he’s nothing more than a flash-in-the-pan rapper a la MIMS or a viable commodity backed by Kanye West remains to be seen, but Desiigner still continues to feast well on the strength of his breakout single. Not only has it gone platinum, it became the recipient of its own set of visuals with Kanye riding shotgun throughout (the rumor has it, an accompanying video for ‘Ye’s The Life Of Pablo take on “Panda,” “Pt. 2,” was shot as well), and Desiigner made his network television debut on The Late Show with Stephen Colbert with a microphone-tossing, roisterous performance. With his debut album, The Life Of Desiigner, planned for a 2016 release, his success is totally up to him at this point. In the meantime, he’s going to milk a “Panda” for all it’s worth. — Meka Udoh 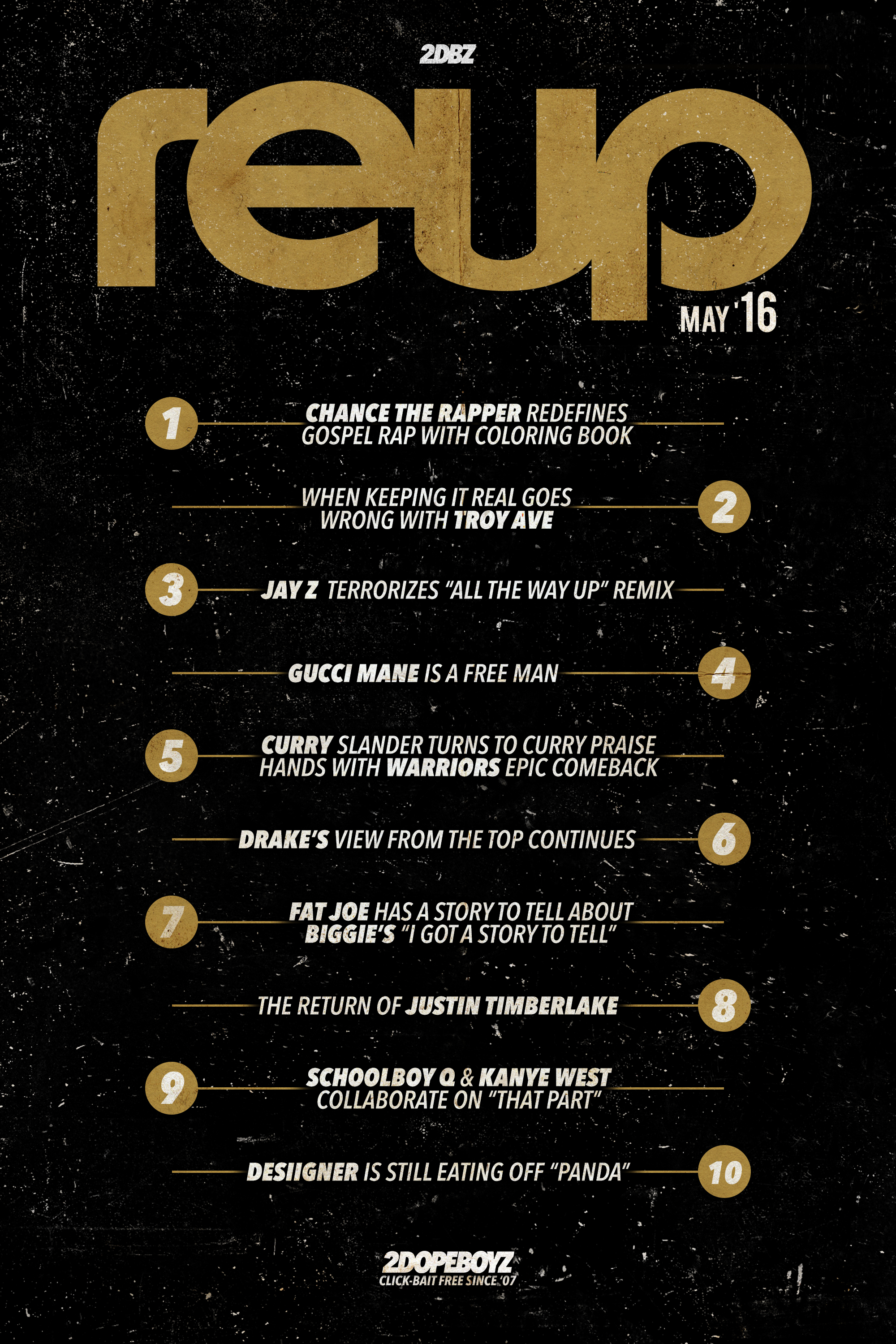 Another Run The Jewels 3 Snippet Has Surfaced