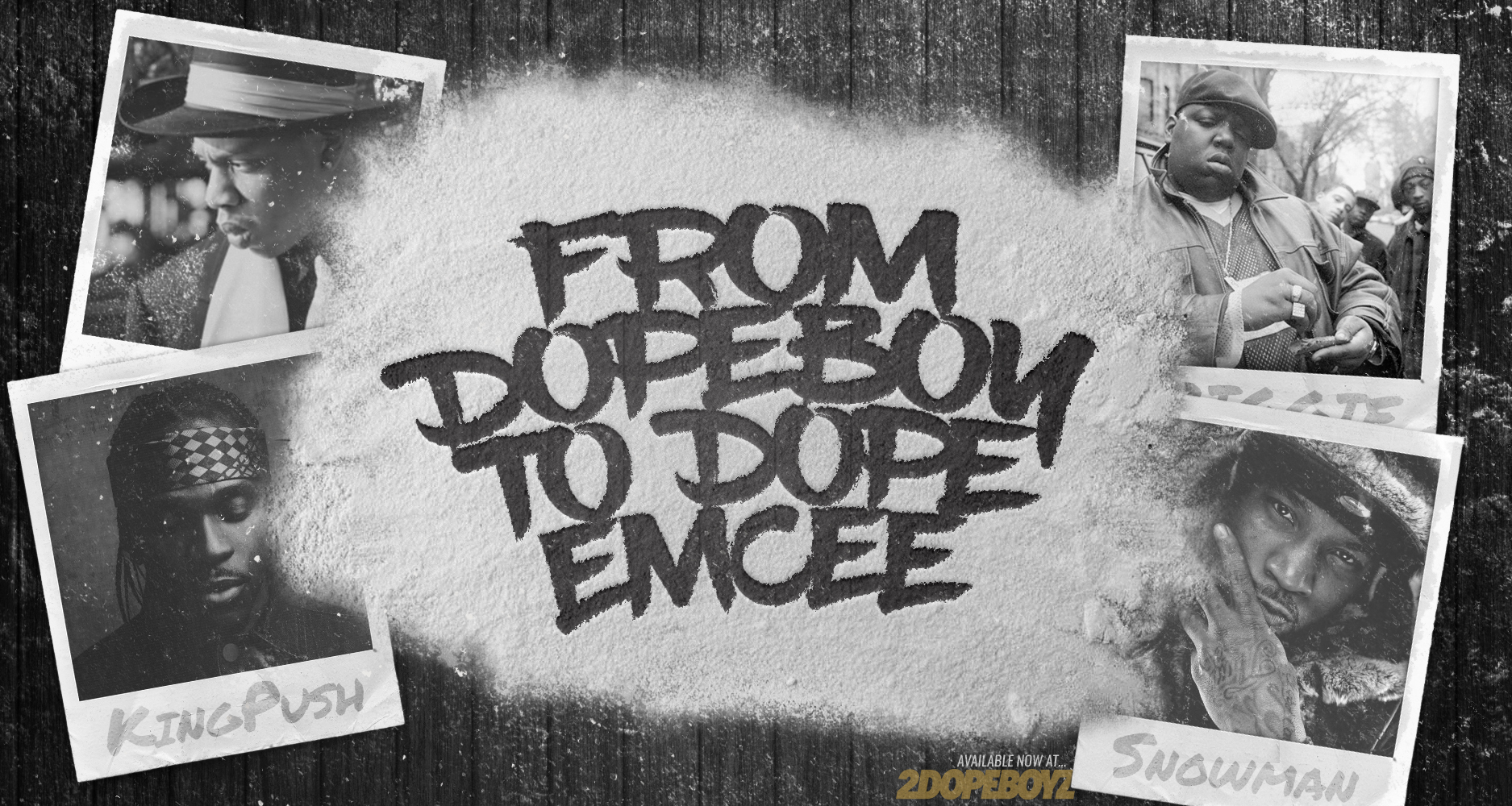 Hustling and rhyming have had a unique marriage that dates back to the early inception of rap music. With drugs flooding the very project apartment buildings that young African Americans lived in, a synergy between the two lives was almost inevitable.

Rapping was eventually viewed by dopeboys as a transition out of the drug dealing life and into legitimacy once hip-hop went mainstream. Instead of hiding their checkered pasts, hustling and rapping became synonymous and the dopeboy told his poetic tales of life on the block in musical form and some managed to establish an extensive career because of it. But there are some rappers who have a knack of putting words together better than others and made the street life sound as cinematic as your favorite hood movie.

With that comes The TENS: From Dopeboy To Dope Emcee, where we take a look at ten rappers who really lived the life (**cough** Rick Ross **cough**) and eventually made their way off the block and into a booth to sell that legalized dope for our listening pleasure. The Notorious B.I.G. was all about the lavish life but never allowed those brilliant melodies to distract the listener from his harrowing past. When Biggie lamented about the evolution of the streets on “Things Done Changed,” you could visualize the blocks that he rhymed about. But there will never be an audio infomercial as detailed and musically inclined as the DJ Premier produced “Ten Crack Commandments.” The perils of the dope game were so intricately outlined that everyone felt that they had the perfect audio handbook to slang powder in their suburb. As blasphemous as this may sound, Biggie was the Moses to the streets. And instead of stone tablets, Christopher Wallace outlined his commandments in rhyme form. Still brilliant nearly two decades after it was initially released. — Andreas Hale Shawn Carter is the quintessential dope boy turned success story who transitioned from the dope house to the booth and, finally, to the board room so unbelievably effortlessly that it seems more fitting for a Hollywood script than a real life story. But when Jay Z was entrenched in the dope game, you couldn’t find another emcee (other than the late, great Christopher Wallace) who told his tales so vividly. When he paralleled the rap game with the crack game on In My Lifetime, Vol. 1, that’s when you knew shit was real and Jay Z wasn’t simply another drug dealer who could rhyme pretty good. And his latest effort alongside Pusha T (“Drug Dealers Anonymous”) finds an aging Hova brilliantly traversing the landscape of money laundering. “We got storefronts, we got employee stubs, We been opening studios and 40/40s up, The paper trail is gorgeous.” Who else can make turning drug money into legal money sound so sweet? — Andreas Hale In short, this list exists solely because of one Terrence Thornton. Alongside his brother, Gene “No Malice” Thornton,” the two were responsible for some of the most authoritative albums and mixtapes on crack rap: Lord Willin’, Hell Hath No Fury, Til The Casket Drops, and three critically acclaimed We Got It 4 Cheap mixtapes. The fact that he’s able to grab a half-billionaire like JAY Z out of quasi-retirement and onto a song known as “Drug Dealers Anonymous” is more than enough to warrant him landing on this list. If you’ve ever thought about pumping a few crills after listening to “Grindin’” even once, then that makes his entry on this list that much more valid. — Meka The Kool Genius of Rap is one of the most influential rappers of all time that some people may not even know of. In a Juice Crew stacked with legendary talent —Big Daddy Kane, Biz Markie, MC Shan, and Marley Marl, among many others — Kool G Rap’s DNA is found in the lyrical blueprints of The Notorious B.I.G., Nas, Eminem and JAY Z, among countless others. Credited as one of the original purveyors of the “Mafioso Rap” sub-genre, G Rap’s sales may have never matched those he has inspired, but his legacy will forever remain. — Meka Before Wu Tang became this phenomenon that swept up the music industry, Raekwon was simply a member of a group of Staten Island guys who were trying to get the hell out of the hood. With a theme of two guys who had grown weary of the street life but had one more sting to burn off before going legit, the phenomenal Only Built 4 Cuban Linx was born. And nobody expected this ode to the dope game it to be as cinematic as it ended up being. From the drug paraphernalia elements of “Knowledge God” to the “Rainy Dayz” narrative of the hustler who is always away from his girl, Only Built 4 Cuban Linx established Raekwon as that Mafioso rapper who eventually made it out of the streets and left the dope game behind in a cloud of smoke. — Andreas Hale From the cryptic slang to his colorful street tales, Ghostface was an emcee who completely embodied the dope boy life. Look no further than the appropriately titled Fishscale for what is arguably one of the most scintillating audio documents of drug dealing that you’ll ever hear. Although everybody and their mama weaved tales from a hustling life into their rhymes, nobody did it with the panache that Ghostface employed. Go back and listen to “Kilo” and if you didn’t know how to cook, you do now. — Andreas Hale Ignore that he’s now more of an actor in major Hollywood blockbusters than the preeminent leader of the blocks of Bankhead at this point; during the nascent stages of his career T.I. was one of the most influential rappers to come out of the post-OutKast/pre-snap era. Trap Muzik has served as a harbinger of Southern-based crack and street rap that wasn’t as acknowledged as its West and East Coast equivalents. And you can’t tell me that “Rubber Band Man” isn’t one of the riot-causing anthems for dope boys in the South. — Meka No list would be complete without the inclusion of The Snowman. A lot of rappers spoke in code when it came to the dope game. And, even then, it wasn’t always about selling that white. But for Young Jeezy, it was always about selling dope. Like, always. There was no hidden agenda here. Young Jeezy sold dope boy rhymes to a mainstream audience for what felt like an eternity. Even when he had enough legalized income to wash out the drug money, Jeezy couldn’t escape the trap rhymes. And he wasn’t too bad at it, either. — Andreas Hale Brad Jordan made coke rap that was so vividly intense it felt as if his albums came pre-packaged with a sample of Blue Magic. Many of today’s younger hip hop fans may not recognize Mr. Face’s early work outside of “Mind Playing Tricks On Me” (if even that), but his status as one of the best to ever sell it for cheap was cemented with his 2002 album The Fix, which is arguably the virtual sequel to Jay-Z’s classic The Blueprint in 2001. — Meka Yes, Fat Joe is now known more as either a: the “Big Pun guy” in the 90s, b: the “Lean Back guy” in the 2000s and c: the “All The Way Up guy” in the 2010s. But the guy whose nickname is “Joey Crack” is too hard to ignore on this list. Head to his third album, 1998’s Don Cartagena, as proof that he was able to nimbly switch between hardcore (“The Crack Attack,” “John Blaze”) and commercial appeal (“Bet Ya Man Can’t”), all the while keeping the coke rap sensibilities that resulted in him landing a slot on the list. — Meka