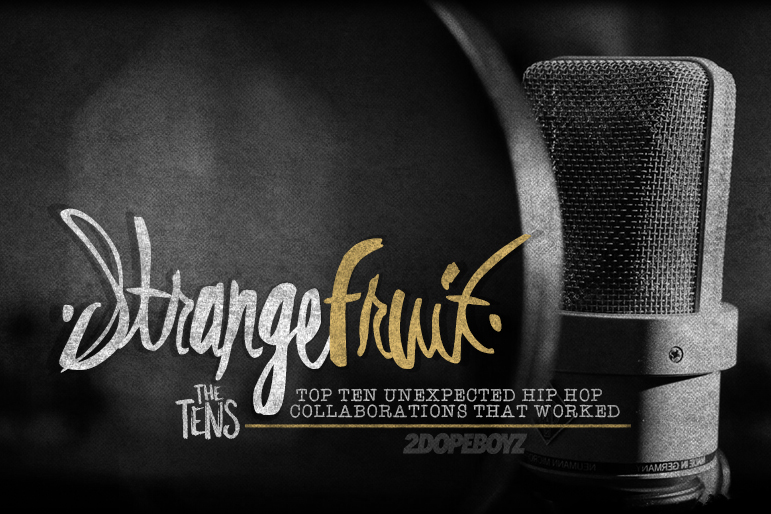 Hip Hop collaborations are pretty commonplace these days. If you cough up the right amount of cash, you can pair anybody. But that doesn’t necessarily mean that it will produce a product worth listening to. Let’s be real, some collaborations are done just for the sake of getting a piece of another artist’s audience.

But what about those collaborations that unexpectedly bring together artists that you wouldn’t fathom working together? On paper, they look crazy. But, sometimes, they are brilliant when put into practice. This isn’t about those silly cross-genre collaborations that blend elements that don’t really need to co-exist. This is about putting pieces that you wouldn’t necessarily think would fit together and find out that the end result is even iller than you would have ever imagined.

From Hov and the Underground Kings to The Based God and Tiggalo, the latest installment of The TENS ranks our top 10 favorite unexpected hip hop collaborations.

(A playlist can be heard on Apple Music or Spotify.) 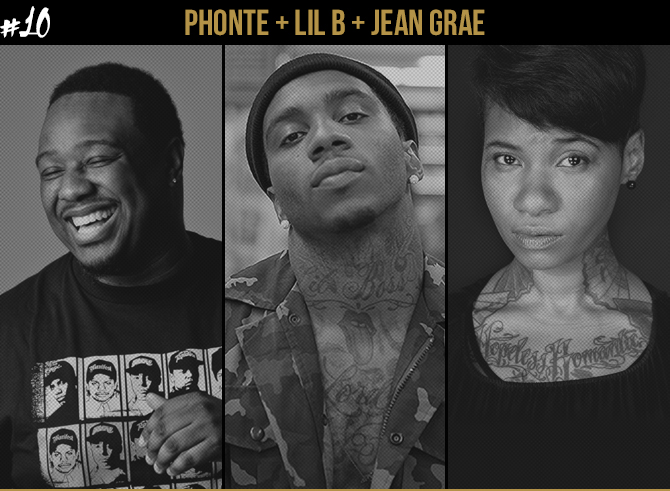 Everybody thought Lil B’s swing from dope boy slang to self-help positivity was a tour down cuckoo road after he reinvented his career apart from The Pack. He owned social media, but could he put together a dope song? Somehow, he connected with Phonte and Jean Grae over a 9th Wonder beat and delivered something that was both coherent and on beat. Of course, Phonte and Jean Grae came correct but it was a bit of a surprise to see Lil B prove his worth as an emcee alongside this trio. — Andreas Hale 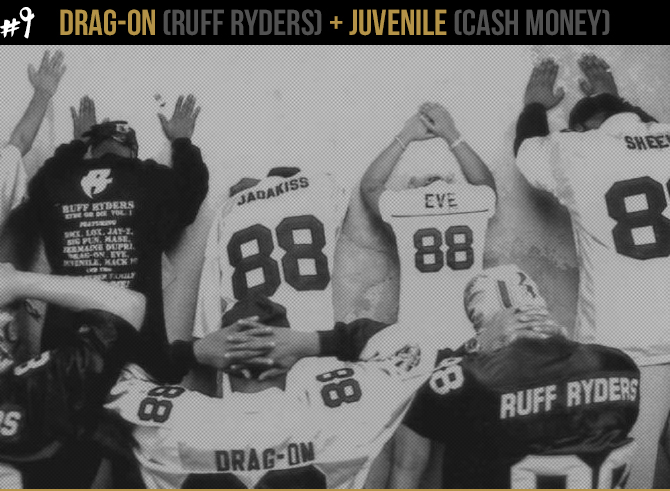 Remember when Cam’ron lamented “When the f*ck we start bouncin’?” on his 2000 single “Let Me Know?” While it’s widely regarded as a shot toward JAY Z’s “Can I Get A…,” it could’ve also been a comment on the subtle-but-inevitable shift in New York’s sound from its traditional boom-bap styling to one that is now Southern-fused (this line is now ironic, considering Cam’s own sonic shift, but I’m digressing). Either way, the Ruff Ryders clique dabbled with the sound in “Down Bottom,” which paired Drag-On and Juvenile (we don’t acknowledge the version with Yung Wun. Ever.).

Over some riot-causing synths, “Down Bottom” is unbridled aggression at its finest. The call-and-response hook is easily its most memorable moment: “Do y’all n****s bust y’all guns? (Hell yeah we bust our guns!)”  Seventeen years later, the song will still cause a mosh pit in a New York club, and sounds more at home next to “Panda” now than it did with EPMD, Nas and Gang Starr back then. — Meka Udoh 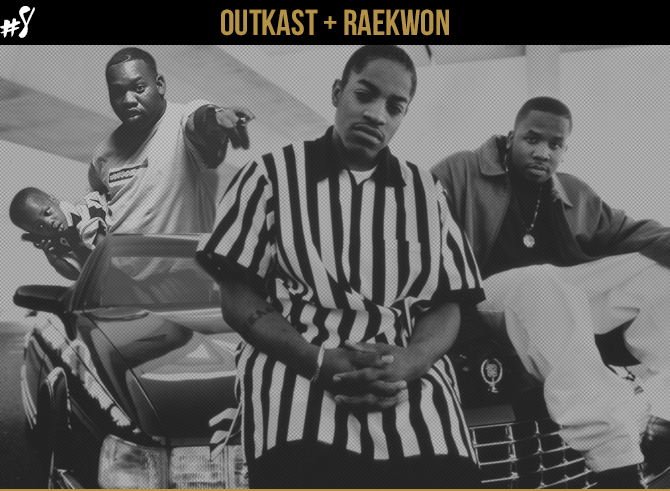 This was the first time that that Outkast featured a non-Dungeon Family member on one of their albums. And it certainly was a doozy. Shaolin Island’s very own Chef was absolutely scintillating on “Skew It On The Bar-B,” which was crafted after Raekwon ran into Big Boi at Lenox Mall in Atlanta. Rae hunkered down in the Dungeon house and the trio concocted the rumbling track from Aquemini that brought some much-needed East Coast appreciation to the Southern rap duo. — Andreas Hale

Nobody ever thought El P would be anything more than an underground emcee. His brand of alternative boom bap production was originally deemed too abrasive for mainstream ears. Killer Mike struggled through his own industry purgatory while trying to figure out the best situation for him. He had just left Big Boi’s Purple Ribbon and was trying to find his voice. El-P dug Killer Mike’s I Pledge Allegiance to the Grind series and Mike wanted to create his own version of Ice Cube’s AmeriKKKa’s Most Wanted. The two connected for R.A.P. Music in an unlikely pairing of artists who nobody expected to cross paths. “Big Beast” would be the first song the duo would record. And, goodness gracious, this was most certainly something to behold. Joined by T.I., Bun B and Trouble, “Big Beast” throbbed with that futuristic El Producto production but all of the Southern emcees slid in effortlessly. This would end up laying the foundation for the critically acclaimed Run The Jewels and what you know today as one of the best duos in hip hop. Oh, and the video is absolutely ridiculous! — Andreas Hale 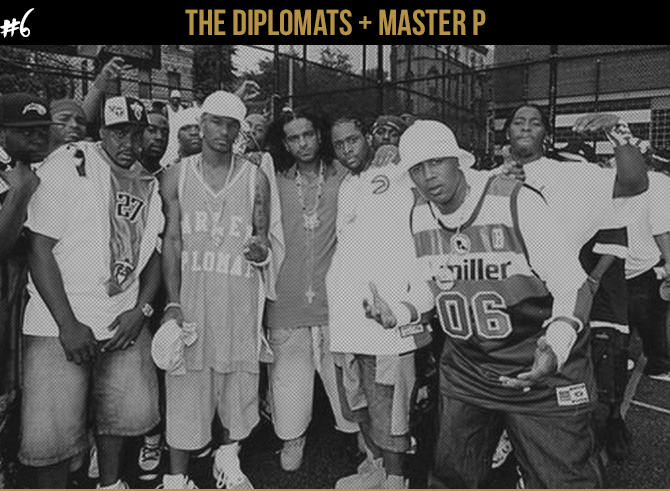 The Diplomats — the Harlem super crew of Cam’ron, Jim Jones, Juelz Santana, and Freaky Zeekey — were a New York anomaly, but then again so was Cam’s career in general. Bred by the late Big L and earning checks for his writing contributions on Ma$e’s Harlem World and Lil’ Kim’s “Crush On You,” Cam eschewed signing to Bad Boy Records for a deal at Lance “Un” Rivera’s Untertainment imprint, resulting in years of label limbo which nearly ended his career had it not been for Dame Dash. Freshly signed to Roc-A-Fella Records, Cam immediately notched a platinum plaque with his third album Come Home With Me, and proceeded to bring his friends along for the ride.

The end result was their double-disc debut as a group, Diplomatic Immunity. Stacked with bangers from start to finish (“Real N****s,” “Dipset Anthem,” “I Really Mean It,” “Purple Haze,” “I’m Ready”, and many more), near its end Master P joined them on a remake of his 1995 and 1996 No Limit classics. “I represent where them killers at,” began Cam’s opening salvo, and the song just got harder from there. If you could point to the single thing that kick-started New York’s infatuation with Southern rap (or, at least, the seeds that would become the A$AP Mob), it would be this song—or “Down Bottom.” — Meka Udoh 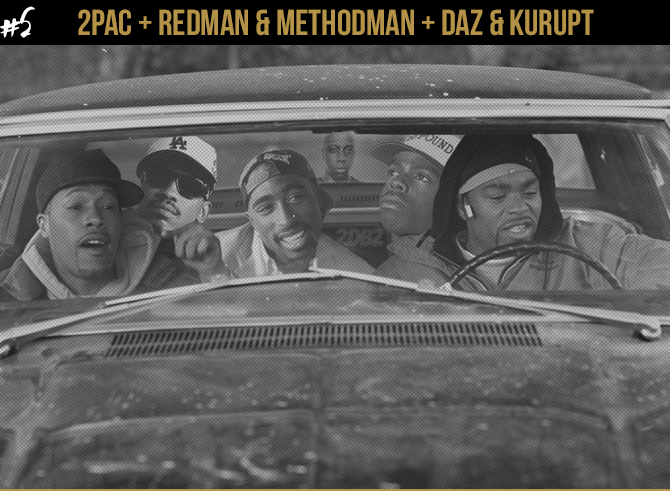 In the midst of a East vs. West feud that was perpetuated heavily by the media, Tupac set out to prove that his beef was with Biggie and not an entire coast. Originally a collaboration between Tha Dogg Pound and Wu-Tang, Tupac hijacked Inspectah Deck’s verse and Redman later joined his “How High” compadre for a wild romp over spacey Daz production. Pac proved that he was more than passion on the microphone, Kurupt showed that there’s really no match for him when it comes to straight lyricism and Meth & Red littered the cut with their recognizable brand of dopeness. – Andreas Hale 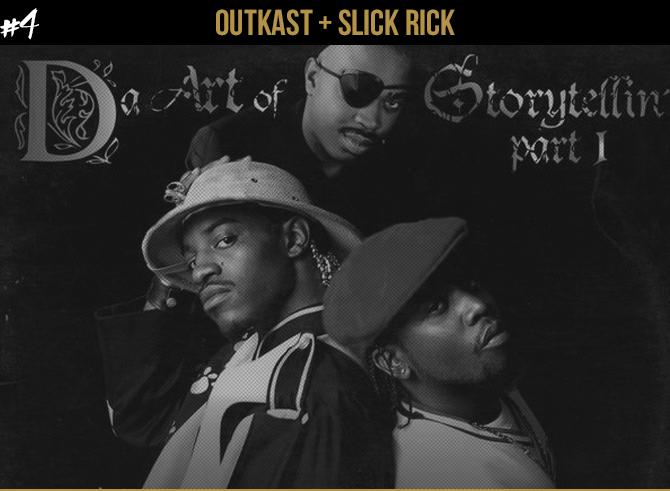 By 1998, OutKast — née André 3000 and Big Boi — had established themselves as some of the preeminent lyricists of their generation. Slick Rick, however, was just getting his own rap legs back under him having been incarcerated for six years following his 1991 attempted murder and weapons convictions. While Rick had made appearances on songs from Aaliyah and Montell Jordan, he made his formal re-introduction on the single version of “Da Art of Storytellin’ (Pt. 1)” from Aquemini.

Following Big Boi’s parking lot tryst with Suzy Skrew and 3 Stacks’ tragic tale of Sasha Thumper, Rick showed out with his own verse about a dysfunctional relationship he just couldn’t shake off: “I oughta cut her off, let another soothe me/But I don’t know, ordinary chicks don’t move me/I mean, I tried to fall in love with a bittie/But straight up, just be with the chick out of pity.” The Ruler was back like he never left. Not to mention, the music video was one of the best of 1998, with puppet versions of Rick, Dre, and Big Boi—courtesy of the same person who created the characters on Crank Yankers. — Meka Udoh

At the time of its release, this was one of the more curious (and at times confusing) collaborations ever. Kendrick Lamar was hailed as rap’s next savior—mixing dense lyricism with the street sensibilities of a kid who was raised by and around gangsters yet never imbibed on those influences. Gunplay was MMG’s loose cannon who was facing life in prison for an armed robbery charge. It was that dichotomy which produced what is arguably one of Kendrick Lamar’s best song, “Cartoon & Cereal.”

While Kendrick shined brightly throughout the seven-minute song, it is perhaps Don Logan’s closing verse that takes the song to another level: “Yeah this me, no mic/No cameras, no lights, just pain/Mama, how much trauma can I sustain?” Intensely personal, it’s easily Gunplay’s best verse to date and one of the few times Kendrick was “Renegaded” on his own song. — Meka Udoh 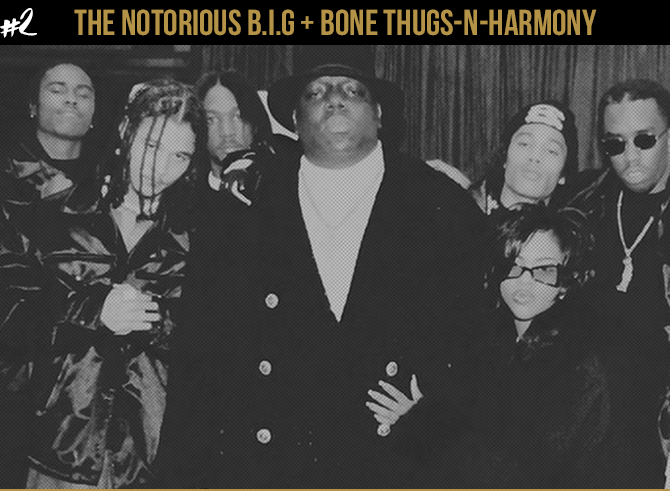 Everybody knew that Christopher Wallace could rap his ass off. But when paired with the ultra fast-rapping cats from Ohio, every eyebrow in the industry was raised with piqued interest. Would Bone have to slow it down to fit with Biggie because, surely, that big man couldn’t keep up with Bone Thugs N Harmony. Right? Right??? Wrong. The Stevie J production (yes, rat face from Love & Hip Hop has talent) pulsated with an uptempo kick and demanded some faster than usual rhyming. And then Biggie gave the track a tongue lashing nobody expected. It was like the first time you saw Heavy D bust a move. It was unexpectedly graceful. Bone obviously menaced the track with some of their finest work. Bizzy especially crucified his verse as Krayzie and Layzie let the violence fly. It was one of those moments where you realized that B.I.G. was really one of, if not the, best to ever do it. – Andreas Hale 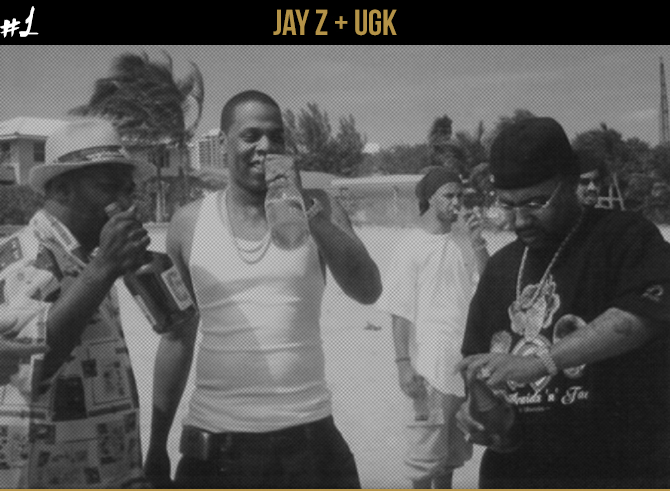 Jay Z had already cemented his status as a crossover star with Vol. 2…Hard Knock Life and with Vol. 3…Life and Times of S. Carter, he made a bold decision to bring an act that was a Southern cult favorite into the mainstream with him. “Big Pimpin” blindsided everyone with its inclusion of UGK. On paper, nobody was quite sure what to expect. And you were still curious when Timbaland’s sampling of “Khosara Khosara” blasted from the speakers. “What the hell is about to happen?’ you probably thought to yourself with a raised eyebrow. Jay’s flow was smooth as silk, yet extraordinarily misogynistic. But this was all about UGK. Bun B became everyone’s favorite Texas emcee. It was one of the few times that Jay was outworked on his own song as Bun B took the opportunity to impress a new audience. And then there was Pimp C’s iconic verse that delivered the proper exclamation point. The way he enunciated each word with a drippy Southern drawl without a sense of urgency. He was at home and didn’t give a f*ck who was listening. – Andreas Hale 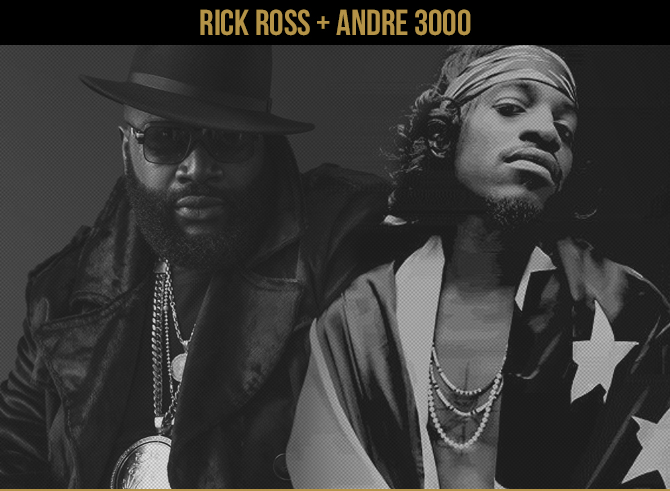 By the 2010s André 3000 was long gone from rap. Following OutKast’s sixth and final album Idlewild in 2006, he had all but disappeared, only popping up sporadically on various songs from artists like Lloyd, John Legend, Beyoncé, Rich Boy, and that “Walk It Out” guy. In 2012, he only made a pair of musical appearances: Frank Ocean’s “Pink Matter” and Rick Ross’ “Sixteen.”

Following what is arguably his best album, 2010’s Teflon Don, Ross had somehow managed to get a verse from a guy who absolutely despised rapping at that point. Not only that, on a song titled “Sixteen” Dre unloaded a three-minute, 48-bar display of lyrical mastery that had not been seen from him since his Stankonia days. If there was any reason to miss OutKast even more, it would be because of “Sixteen.” — Meka Udoh