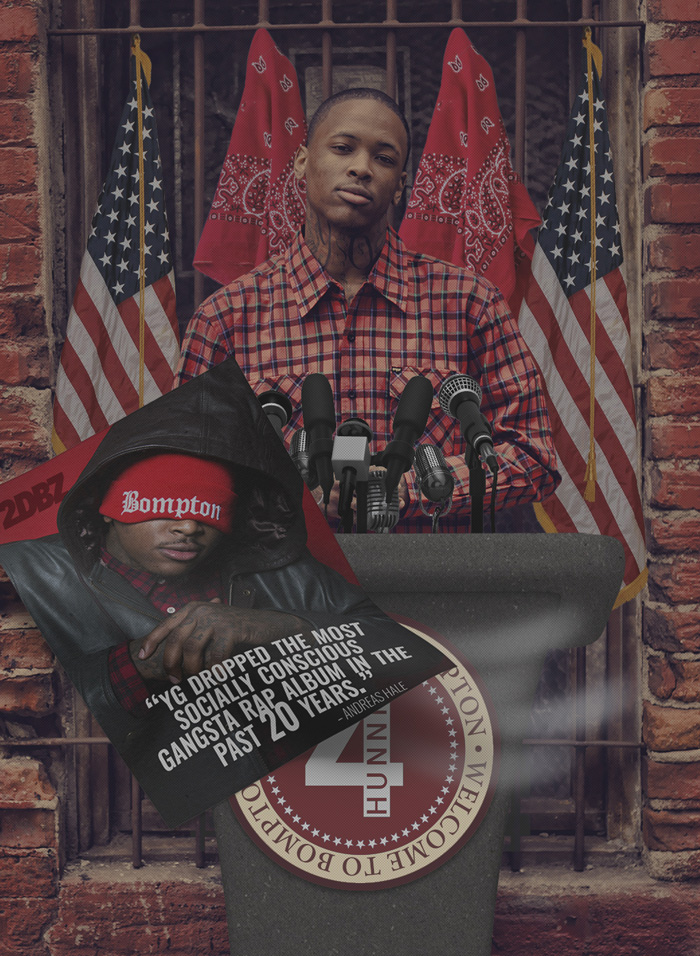 Authenticity is an under-appreciated part of hip hop. From the days of a studio gangster (Bo$$) to a studio drug dealer (Rick Ross), hip-hop has recently changed its stance on the importance of being authentic. Back in the 90s, being exposed as a fraud was the worst thing that could happen to a rapper. But in this day and age, playing a role for profit is just as acceptable in hip hop as it is in Hollywood.

YG wears his authenticity like a badge of honor. The product of Compton, California represents a lifestyle that is often forgotten in this era of emo-rap and kids who rap for fun instead of trying to find a way out of a dire situation. For whatever reason, gang culture is treated like a thing of the past. But YG is living proof that bad things still go down in his hood and simply aren’t reported. And “living proof” is delivered in the literal sense as an unknown assailant shot YG in a Los Angeles studio last June. The only reason that this became newsworthy was because of YG’s status. Otherwise, it would have likely been swept under the rug.

After spending some time with his sophomore album, I’m willing to go out on a limb and say this: YG just dropped the most socially conscious gangsta rap album in the past 20 years.

To be clear, I’m defining gangsta rap as the music that emanated from Southern California from individuals who were actually immersed in gang culture. I’m not talking about violent rap, I’m specifically speaking about a genre that was born in the 90s that opened our eyes to the lives of Bloods and Crips. But I digress…

Still Brazy displays a level of maturity seldom seen in today’s hip hop landscape. While emcees such as Kendrick Lamar and J. Cole are lauded for their lyrical wizardry and introspection, a guy like YG isn’t expected to develop a sense of social consciousness. Like most rappers, YG is supposed to be successful and be consumed with a world that affords him with riches. The world he left behind and the circumstances that surrounded him before the come up are to be ignored. Instead, he could be like boxer Adrien Broner and support Donald Trump solely because he expects him to save him some money on his taxes. Everything else is to become elevator music.

But YG is the exact opposite of that “rags to riches” narrative where the past is left in the past. Instead, he’s now consumed with paranoia while still being entrenched in a lifestyle that helped shape and mold him. Meanwhile, he’s had the opportunity to see what life is like outside of Compton and the plights that exist in this country. And, because of that, his music is changing. Don’t get it confused; he’s still as West Coast as house shoes and socks. But his views have expended and it has permeated into his music.

Full disclosure: I wasn’t as big on YG’s debut album My Krazy Life as a lot of my industry peers were. To me, he was an extremely mediocre rapper who benefitted from the fact that he resurrected a genre of music that hadn’t been heard since the 90s. And, to be clear, he’s still an average rapper if we’re talking about lyricism.

But there was an endearing part of YG on his debut album that was very self-aware of his position in gang life. He didn’t represent himself as the man on top of the food chain. Instead, he was just a disposable human on the block striving for survival. The subplot was that Bloods and Crips could celebrate the smaller victories of life, like waking up to see another day, while also giving perspective to an often forgotten part of growing up in the impoverished confines of California.

My Krazy Life was good for what it was but, gotdamn, his sophomore effort, Still Brazy, is truly something else.

I was extremely skeptical about how YG would trudge forward without the production of DJ Mustard backing him. Now that he’s no longer held upright by Mustard’s beats, he had to prove that it wasn’t the beats that made him. But he overcame that challenge by adding layers to his character. He’s matured immensely and comprehends that what’s going on in the rest of the world can and will affect life in Compton.

YG represents the guy from the hood that’s deeply entrenched in street life but will protect the hell out of the next generation. Unlike his peers, he has a code of ethics and gangbanging is all he knows. But now that he’s older, his outlook on life is different. He doesn’t want the youth to go down the same path that he did. Instead, he’d rather do whatever he can with his money to redirect them to a better life. And now that he’s wiser, he’ll disseminate the information the best way he knows how.

Where Kendrick Lamar dazzles with the way he puts together his words, YG offers candor and honesty. He’s not looking to confound you with verbal gymnastics. He has something to say and wants it to be heard at its root. Punchlines and metaphors have no place in YGs vernacular. It’s about getting straight to the point and not confounding with slick wordplay. It’s just that he has more to say now than he did before.

That doesn’t mean that YG has gone the “intelligent hoodlum” route for the entire album. There are still traces of misogyny, representing for his hood and just having a good time. But there’s an overwhelming sense of paranoia that permeates throughout this album.

“Who Shot Me” finds YG openly pondering how he ended up being shot in 2015.

… he says on the opening bars. For the rest of the four minute song, YG wonders aloud just who would have it in for him. He recognizes that it may have been somebody in his circle because they knew the gate code and then he shifts to people that could have various reasons to want him off this planet. It’s a sobering song for a rapper who has seen his popularity surge over the years.

Although YG is all grown up, there are huge swabs of 90s era gangsta rap gloss covering the album. Still Brazy isn’t a distinct departure from My Krazy Life as much as it is a progression. But the elements that illuminate so strongly have a significant presence. While Kendrick Lamar’s To Pimp A Butterfly called upon funk and jazz, Still Brazy is most definitely a ride through the G-Funk Era. “Twist My Fingaz” oozes of that gangsta funk with it’s snapping drums and woozy synths while “She Wish She Was” calls upon Mack 10’s “Foe Life” for its influence.

In terms of rhymes, you’re not going to get much more Cali than Still Brazy.  To be blunt, AD’s verse on the album’s opener “Don’t Come To LA” is the most Cali shit I’ve heard in a long time. Well, maybe not as Cali as “Twist My Fingaz” and “Bool Balm & Bollective.” The former finds YG ignoring the haters waiting to twist his cap back outside the club and instead opts to dance his cares away. The latter is a gangster remaining calm in the face of the never-ending drama that comes with residing in Compton. Whether it be the opposition wanting to take you out or a spiteful lady looking for payback after YG left her high and dry, the 26-year-old isn’t stressing any of it.

For the most part, Still Brazy makes you want to jack a fool driving a green Mustang 5.0 on triple gold Daytons and order a double burger with cheese. But then you want to take that car to a #BlackLivesMatter rally, grab a megaphone and empower the hood to protest anybody who doesn’t have their best interests at heart.

And that’s what separates this album from many others. There’s a stream of consciousness that seeps out from under all of the slapping production and crass rhymes.

While he may not be stressing the haters, he does have an issue with how minorities are dealt with by police and the discrimination that both African Americans and Hispanics deal with every day. “Blacks & Browns” featuring Sad Boy speaks directly to the mistreatment minorities deal with. Both share brutally honest perspectives through the eyes of their people and ultimately show black and brown pride. In an era where we celebrate like we’re all rich, it’s refreshing to hear the authentic struggles that African Americans and Hispanics deal with from two artists who care deeply about where they are from. As for “Police Get Away With Murder,” the song is about as straightforward as the title. It’s filled with vitriol and frustration directed at a police system that still doesn’t value black lives. At the end, he rifles off the names of African Americans who have lost their lives at the hands of police. It’s as if he’s speaking from an unofficial pulpit as he speaks in an almost bewildered manner that cannot comprehend how things have gotten worse since Rodney King was beaten down over twenty years ago.

Then YG does something that a lot of rappers don’t have the balls to do: get political.

Politics in hip hop has always been a troubling subject to communicate to listeners. The intricacies of policy and laws are oftentimes too complicated for listeners to digest. But in an election year where a business tycoon/reality television star with some curiously coiffed hair and a penchant for the offensive is legitimately running for president, sometimes the best way to have a call to action is to skip the semantics and get to the point. And that’s exactly what YG and Nipsey Hussle offer with the poignant “F.D.T. (Fuck Donald Trump).” Neither rapper minces words and gets right to the point. Frankly, few artists are brave enough to go directly at a presidential candidate like YG and Neighborhood Nip do.

Some may find YGs approach too abrasive but his voice resonates with an audience who could care less about watching Rachel Maddow or Chris Matthews. The individuals that YG is speaking to have an imperative role in the upcoming election and represent an often-ignored sector of the country that people like Donald Trump will never care to speak to. Whether you agree with his methods or not, you have to appreciate the Compton rapper being bold enough to challenge the system. Many of your favorite rappers are too comfortable in their lofty positions to care, but YG knows that the power lies in those who are in the struggle. And his voice connects with them in a way that nobody else’s will.

It’s amazing to think that this is all coming from the man who dropped “Toot It & Boot It.” But when you really think about, isn’t this how growth is supposed to sound?

YG may not have the best pound for pound album of the year, but he certainly has something that speaks to people like few other albums before it have. Through all the paranoia, YG still makes time to address society’s ills and not just his own. That’s pretty damn impressive for a 26-year-old who still has to worry about getting shot by his peers.