With that comes The Re-Up, a monthly run down the biggest news, songs and features — ranked based on traffic and cultural impact.

Unfortunately, like Prince in April, this month was led by tragedy, with the passing of Muhammad Ali and the horrific shooting in Orlando.

From there, LeBron James brought a championship to the land, Kanye still hasn’t found his marbles, and YG dropped an amazing album.

With that being said, here’s The Re-Up for the month of June. 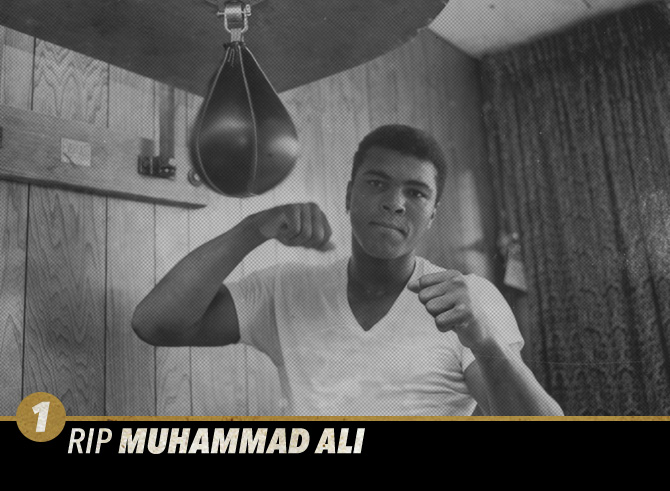 The passing of “The Greatest” at the age of 74 signaled the end of an era. For all of his greatness inside of the ring, Muhammad Ali’s lasting impression will be for all that he accomplished outside of it. A fearless man who risked his prime years in boxing for his morals and values, you’ll be hard pressed to find another individual who would risk three months away from their career to stand for something. That’s conviction. From his bombastic mouth to his brilliance in pugilism, Ali was an anomaly that many praise but few can duplicate. He will forever be missed. — Andreas Hale 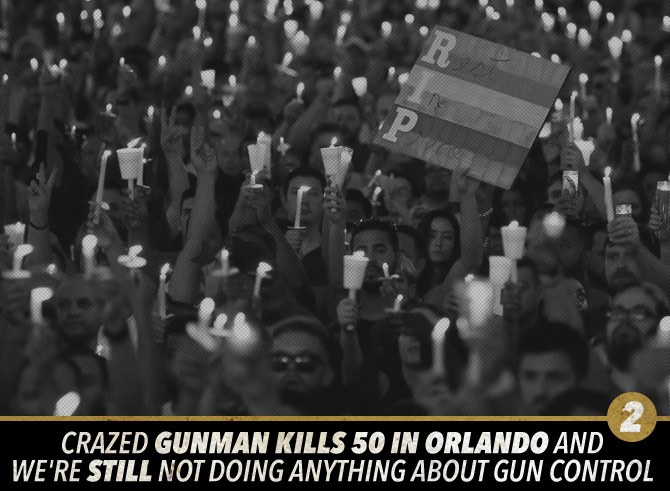 The night of June 12th will forever go down in infamy as the deadliest mass shooting by a single gunman in the history of the United States. Omar Mateen entered Pulse nightclub in Orlando and opened fire with a Sig SauerMCX assault rifle. When he was finished with his assault on the LGBT community, there were 50 dead and 53 injured. And good ol’ Donald Trump wanted to blame radical Muslims. No, it couldn’t have anything to do with the assault rifle that Mateen was able to purchase legally. You know, because a handgun couldn’t have mowed down as many people as an assault rifle. But, here we are talking about everything but gun control in a country that has a serious problem with legal guns killing innocent people. — Andreas Hale 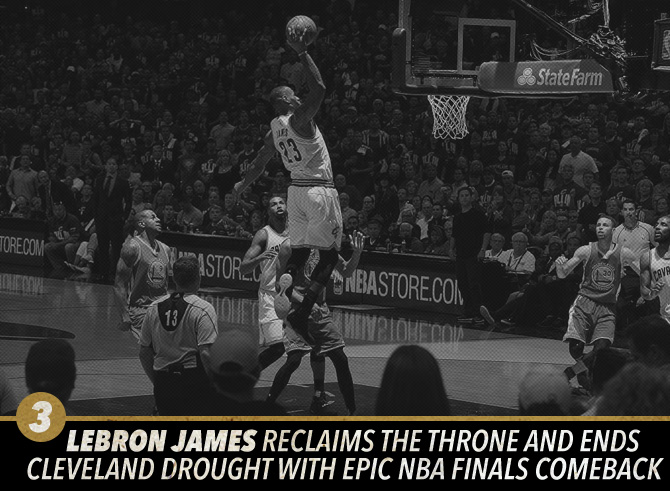 When the NBA regular season ended, the Golden State Warriors looked like they would roll through the playoffs and win their second title. A record breaking season with a spectacular performance from a player who put on video game type performances every night seemed poised to win it all. But there was this little narrative of King James – and all of his acrimony – who desperately wanted to bring a title back to “The Land” after a 52 year drought that subtly played out through the playoffs. Down three games to one in the NBA Finals, the social media cynics revved up their engines to trash James. And then, he showed them why he’s the best player in the league. With the help of some very clutch performances by Kyrie Irving, LeBron James and the Cavs rallied from a “we’re f*cking done” 1-3 hole to “we f*cking won!” 4-3 series victory. It was the greatest comeback in NBA history and had those social media cynics praising James and dropping a steaming pile of poop on the head of Steph Curry. Somewhere in America, J.R. Smith still has his shirt off. — Andreas Hale 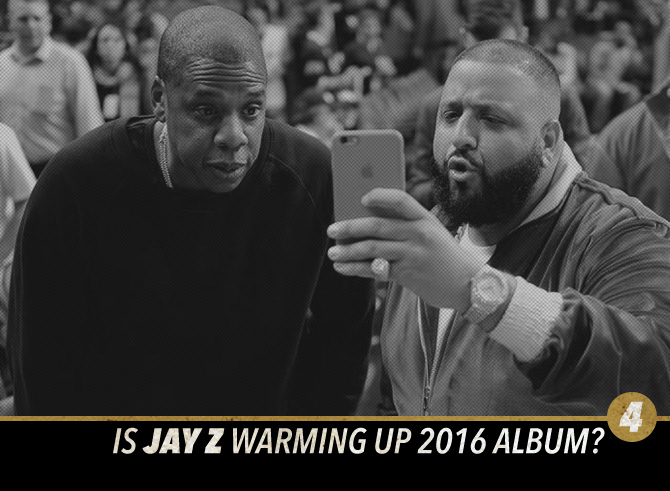 Despite not dropping an album since 2013’s Magna Carta… Holy Grail, JAY Z has stayed in the news throughout 2016 for various reasons, some good and others… not so much. He celebrated the 20-year anniversary of his debut, the instant vintage Reasonable Doubt, and made a return to rap by skating all over Pusha T’s “Drug Dealers Anonymous” and DJ Khaled’s “I Got The Keys.” But they all came after Beyoncé’s Lemonade (allegedly) revealed the trouble in their supposed marital paradise.

With that said, Jay has to hit us with an album at this point. And not that duet project with his wife that’s been rumored to drop for some time now, a real project. It won’t come close to his epic run that began with Vol. 3… Life and Times of S. Carter and ended with The Black Album, but we definitely could do without another Best Of Both Worlds too.

We know there’s one more in you, Shawn. The question is: if an album does drop, would it be an Apple Music exclusive? — Meka Udoh What do you get when you toss wax, naked models of Taylor Swift, Chris Brown, Donald Trump, Amber Rose, Anna Wintour, Rihanna, George W. Bush, Ray J, and Bill Cosby in a bed with the real-life Caitlyn Jenner, Kanye West and Kim Kardashian?

If you guessed “one of the weirdest things I’ve seen in 2016,” circle gets the square.

Ye’s The Life Of Pablo single “Famous” was already getting attention for a variety of (mostly wrong) reasons, what with the Taylor line and all. But then he attempted to repeat the success of his Madison Square Garden showcase by revealing the controversial video in front of a crowd of thousands at The Forum in Los Angeles. Never mind that he could possibly garner a lawsuit or ten from it, the entire thing was just… so not right. — Meka Udoh 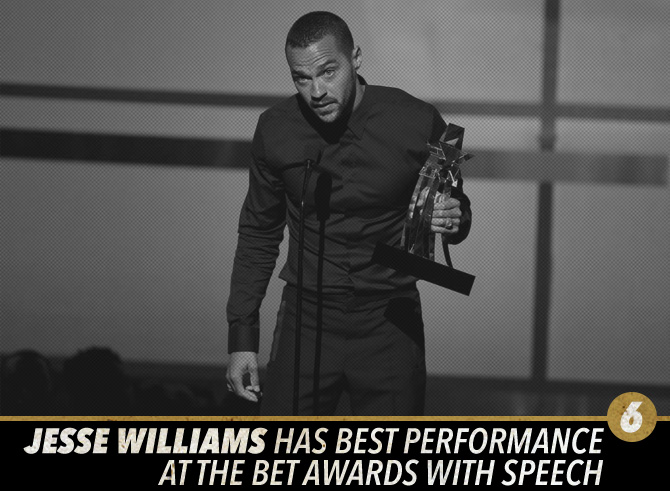 The BET Awards were pretty good this year. Well, as long as you don’t count whatever it was that Desiigner was doing. The Prince tributes were well handled (especially Bilal) and the show managed to not embarrass itself. But the best performance of the night went to a man who doesn’t rap or sing for a living. Grey’s Anatomy actor Jesse Williams has been known for his activism, but when he accepted his BET Humanitarian Award, the level of brilliance that spilled from his mouth was absolutely stellar. He was poignant, concise and powerful. Not a single word was wasted as he traversed between police brutality, white privilege and historical struggles of black people. It was marvelous and left the crowd in awe.

If you haven’t watched it, do so now.

And here’s one of my favorite passages from the speech.

“We’ve been floating this country on credit for centuries, yo, and we’re done watching and waiting while this invention called whiteness uses and abuses us, burying black people out of sight and out of mind while extracting our culture, our dollars, our entertainment like oil – black gold, ghettoizing and demeaning our creations then stealing them, gentrifying our genius and then trying us on like costumes before discarding our bodies like rinds of strange fruit. The thing is though… the thing is that just because we’re magic doesn’t mean we’re not real.” 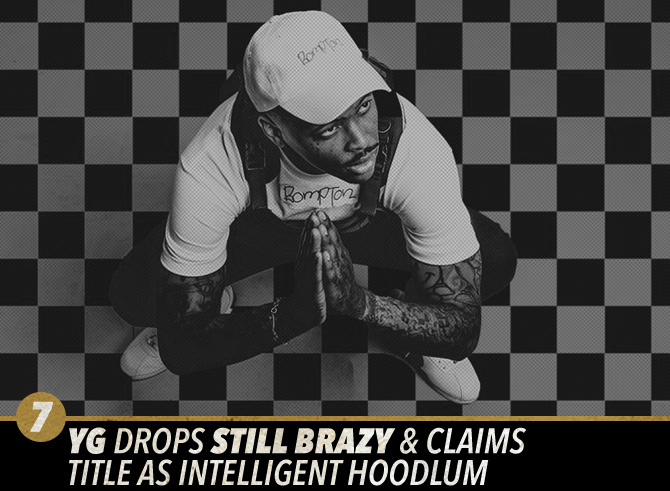 In case you haven’t noticed, the West is back and better than ever.

Decades removed from its G Funk-drenched days with Dr. Dre and Snoop, and years after that embarrassing “Jerk” stage, the likes of producer DJ Mustard, upstart Kamaiyah and Top Dawg Entertainment are among the new flag bearers of California hip hop. However, the true MVP may just be one Keenon Daequan Ray, aka YG.

Following his superb 2014 debut, My Krazy Life, YG would then be the victim of an ambush during a studio session which resulted in him getting shot. The incident wrecked his psyche, and he’s experienced side effects similar to that of a soldier who’s just come home from war, even attempting to seek therapy. All of that would be channeled into his second studio album, Still Brazy. The album is equal parts gangster and conscious, street and socially-aware, party-ready and quasi-radical all in one. Who knew that Fo’ Hunnit had it in him?

Oh, and if he doesn’t get nominated for a GRAMMY, we riot. — Meka Udoh 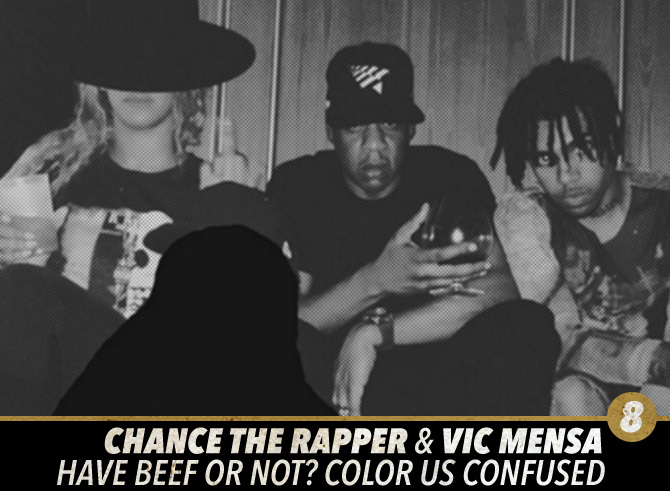 Nobody knows what the hell is going on with Vic Mensa and Chance The Rapper. They’re friends one minute and then Mensa is scratching Chance out of a picture with Jay Z and Beyonce the next. What does it all mean? We don’t know. But what we do know is that Mensa did drop a solid project and then went on to blitz every show he appeared on with wicked freestyles. Look, if those two really have beef, put that nonsense to rest. Just make some good gotdamn music. Okay? — Andreas Hale 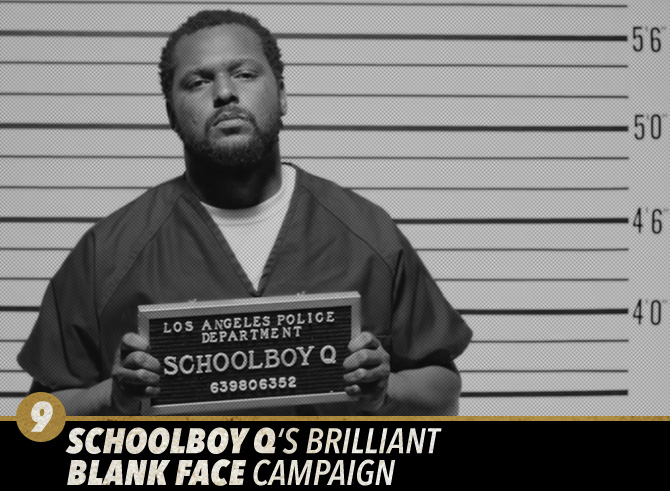 Schoolboy Q has always been the yin to Kendrick Lamar’s yang. Kendrick raps from the perspective of a young man who was exposed to gang life throughout his formative years, yet never imbibed in or adopted those ways as his own; Q is the embodiment of that. There are bright moments throughout Lamar’s albums; Q’s projects revel in the murky darkness.

With his second major label album (and fourth overall), Blank Face LP, arriving July 8th, Q has sent fans on a dark trip through the mind of Quincy Hanley. Following the “‘Day In The Life’ meets Grand Theft Auto“-inspired video for “Groovy Tony,” things got trippier with Kanye West for “That Part,” before taking a much darker turn in his short-film series (“By Any Means” x “Tookie Knows II“).

Judging from his New York listening session for Blank Face, it’s safe to say that both he and YG will be holding down the West Coast rap torch throughout 2016. — Meka Udoh 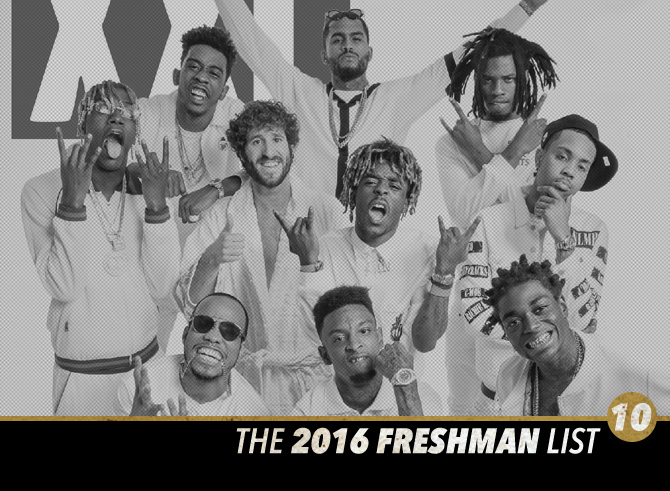 At this point I’m beginning to believe that DONDA purchased a minority stake in this company, and I co-run the whole thing.

I say that because for the third consecutive month Desiigner makes the countdown. This time he is a part of XXL’s annual Freshman list, alongside 21 Savage, Anderson .Paak, Dave East, Denzel Curry, G Herbo, Lil Dicky, Lil Uzi Vert, Kodak Black and Lil Yachty. The list is essentially composed of the typical “safe picks” (Kodak, Uzi), late picks (Dave, Herbo), and artists who are past the “freshman” stage of their career (Dicky, Desiigner, Anderson). Still, the list has gotten the artists a new and wider spotlight them, which is what really matters most. — Meka Udoh 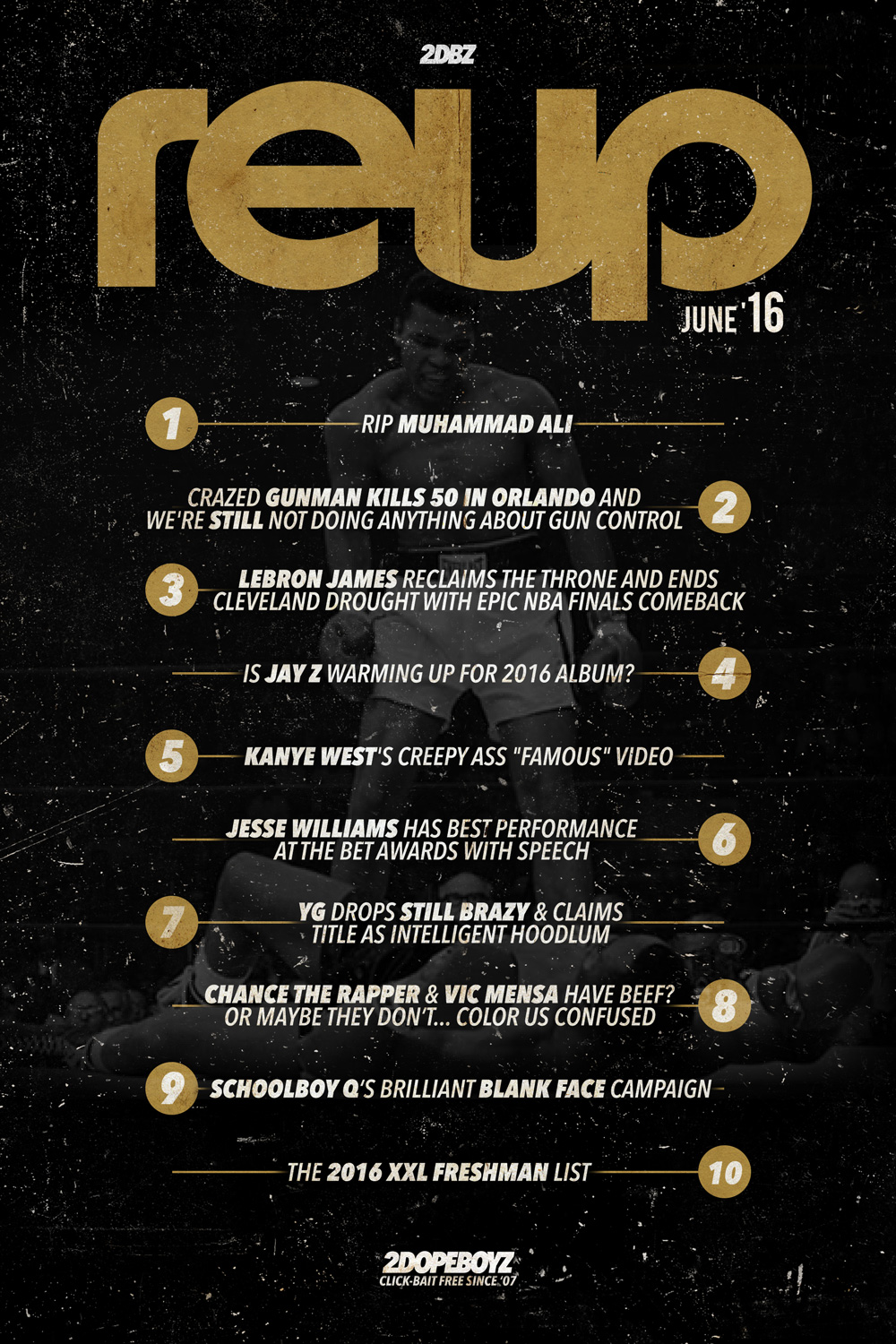