Every day I wake up, it appears that there is a new reality show based on something I never thought would even have a reality show about. Doughnuts? The Food Network has that. Tattoos? Spike TV got that covered. Murder? There’s an entire channel (and one funny South Park episode) for that. Even Action Bronson has a show where he’s basically getting high and watching a History Channel reruns.

Hip Hop isn’t safe either. VH1’s entire livelihood has been based on the antics of Stevie J and company, and although the network recently returned Hip Hop Honors to the airwaves the network cuts its teeth on shows like Dating Naked and Black Ink Crew.

Now, MTV is attempting to bring actual hip hop (and R&B) into the mix. Producer Mark Burnett, the award-winning executive producer of programs such as The People’s Choice Awards and Survivor among several others, is creating a new show in which he aims to shine a light on the independent and underground hip hop scene… with a reality competition. 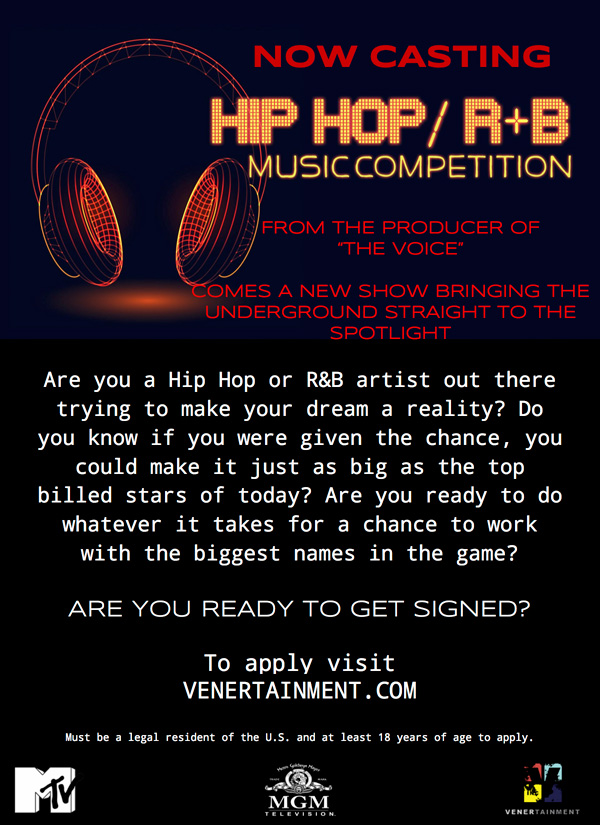 Welcome to the recording studio, where talent is transformed and legends are discovered. At the intersection of music and business, this show gives hip-hop’s freshest talent a chance at every musician’s dream: getting signed. The executive producer of Shark Tank and The Voice, brings us the best of both worlds, with undiscovered artists performing in front of music’s biggest moguls, each eager to sign the next breakout star. But forget the shiny floor stage: It’s all happening in the recording studio in the first of its kind, organic music competition series that breaks all the rules. Burnett and MGM Television will executive produce.

Eschewing the “glitz and glamour” of music, the show is looking for music from both singers and rappers that is both original and in their rawest form. Hilariously (ironically?), no “Tip Drill”-like videos or songs drenched in Auto-Tune will be allowed as submission (seriously, that’s one of the rules). Those interested can apply at Venertainment’s submission site.

The Producer Of ‘The Voice’ Is Casting For A New Hip Hop/R&B Competition Show was last modified: March 31st, 2018 by Meka
Tags:random
Share:
Previous Post