Why You Really Don’t Want A Drake & Kanye Album 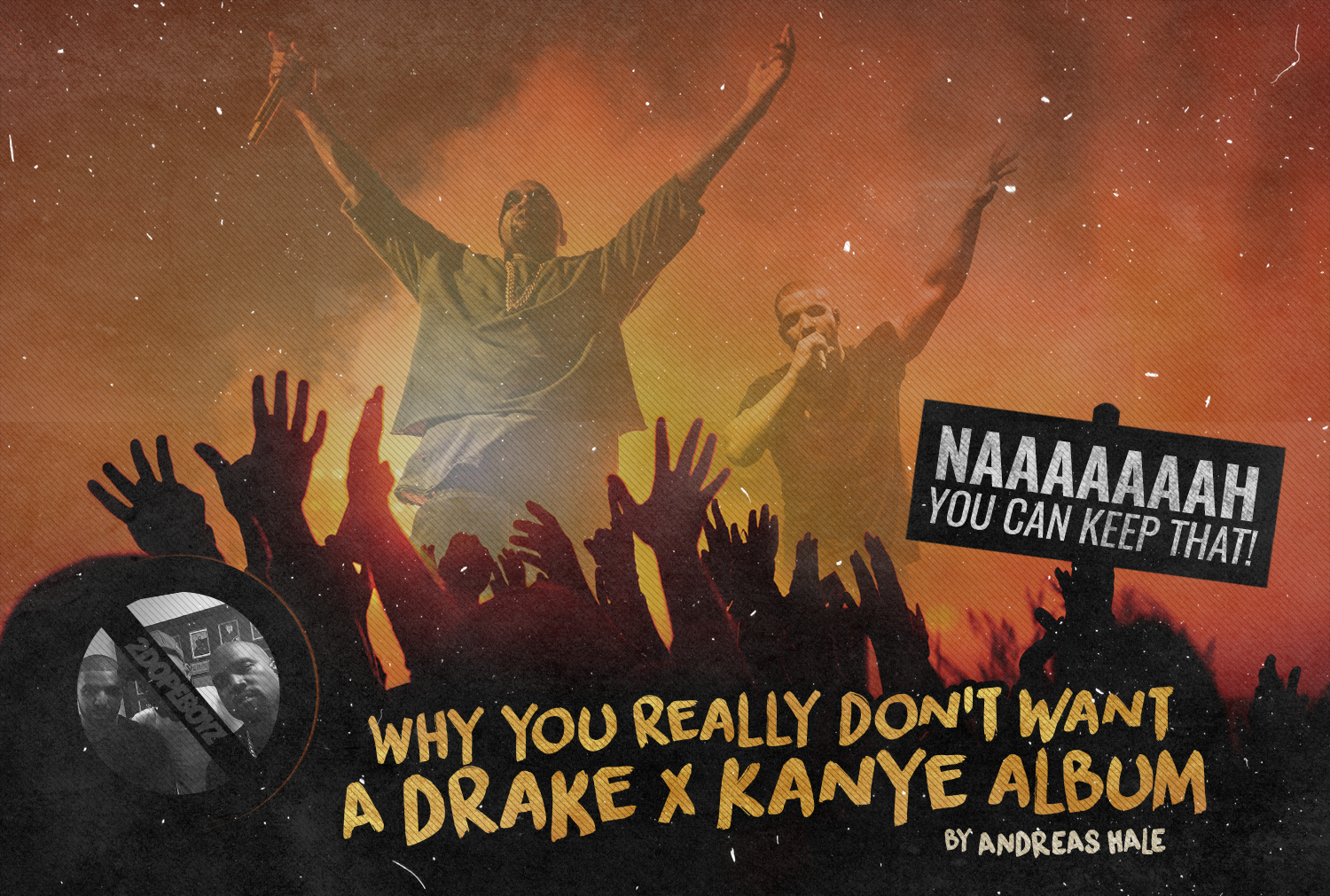 The biggest news to come out of the sixth annual OVO Festival was when special guest Kanye West asked the crowd this pressing question: “Is y’all ready for this album?”

Kanye’s inquiry was repeated and the host of the 2016 October’s Very Own Festival, Drake, emerged on the stage doing some weird bench press gesture, which I assume was supposed to signal that he knows exactly what Kanye was talking about.

The album in question is a collaborative album between Kanye West and Drake that has been playfully discussed in the past. But with the fifth anniversary of Jay Z and Kanye’s moment in hip hop titled Watch The Throne passing this week, well, now it seems like it is a little bit closer to being something real.

And, frankly, y’all can keep that shit.

My apologies if I came off crass, but I want absolutely no parts of a Drake and Kanye West album in 2016. I can already sense the word “hater” sprawling across the electronic billboard in your brain, but allow me to explain why the world does not need the current versions of Drake and Kanye West to collaborate on an album.

The 2016 versions of Kanye West and Drake are like oil and water. Unlike the 2010-2011 versions that seem like a natural fit, these two have musically grown further apart than they ever have. It’s like when Shaquille O’Neal went to Cleveland and teamed up with LeBron James for the 2009-2010 season. Great things were expected but the union wasn’t close to what anybody anticipated. Shaq deferred to LeBron but couldn’t find his footing as the 2nd fiddle and averaged career lows in just about every single major statistical category. LeBron did what LeBron normally does but Shaq wasn’t the dominating force that we’ve known.

If you haven’t figured it out yet, I’m likening Drake to LeBron and Kanye to Shaq. But that comparison isn’t going down in the ways that you might think. Drake is the “best” player in the league but is playing some really uninspired ball as of late. Yes, I’m talking about Views being a very average season for him. It didn’t push the envelope but instead just maintained standards. There’s nothing progressive about that whatsoever in 2016. He’s been on cruise control for the past year while dripping of some dancehall ectoplasm straight out of Ghostbusters that has him doing the dutty wine in his sleep.

Meanwhile, I don’t know exactly where Kanye’s head is at these days. Whether you love or loathe his music, one thing we can all agree on is that it’s different. Blending these two together may sound good in theory but in practice could be a bit of a mess.

For starters, the 2016 rapping version of Kanye is just plain nonsensical and has absolutely nothing in common with Drake. For the most part, Kanye raps about silly things and drops a crass line or two. Whether he’s talking about bleached assholes or telling us that this isn’t Chipotle, Kanye doesn’t even sound like he cares anymore. As for Drake, his last album was interchangeable with his first album in terms of content. His subject matter hasn’t matured and asking him to look at social issues for inspiration might inspire an aneurysm.

They lack synergy and a whole album would find two vastly different styles competing for the spotlight. And that’s not the same as Jay Z and Kanye trading bars on the black excellence album known as Watch The Throne, where Ye still had a semblance of consciousness before he became this megalomaniac that prowls the industry today. Drake will rap about vintage wines where the grapes grow in places we can’t afford to think about while Kanye will probably trash Taylor Swift’s vagina and fawn over his wife’s ever changing face and body.

Hell, Kanye didn’t even truly finish his own damn album so how am I supposed to have faith that a Drake and Kanye album would sound anything but incomplete.

It would have been amazing to hear Drake over some vintage soul sampling Kanye production. You remember that time when Kanye was responsible for the production and his album credits didn’t read like the cast of “Ocean’s Twelve?” The good ol’ days, right?

Kanye’s sound of today lends itself more to the aggro-rap stylings of Travi$ Scott, where lyrical content is secondary to energy. And Drake is absolutely not an energy rapper (I know, he has a song called “Energy” but it’s not the same thing). In all actuality, it would have been splendid to hear Drake add some bars to “Devil In A New Dress” or “Can’t Tell Me Nothing.” But the idea of Drake rhyming on “FML” or “Facts” feels more like nails screeching across a chalkboard than anything pleasant.

Let’s be honest: Drake sounds his best with Noah “40” Shebib and nothing else comes close.

Also, I don’t mean to come off like a weirdo conspiracy theorist but I’ve always felt like Kanye never had Drake’s interests at heart. Going all the way back to Kanye directing Drake’s “Best I Ever Had,” it always appeared to me that Kanye felt Drake was a threat and his helping hand was always one of sabotage. If you recall, the video for “Best I Ever Had” was littered with sweaty, voluptuous women playing basketball (and stretching). For us guys, yeah, it was great. But it was divisive when it came to getting play as women were offended that a song they loved by a new artist was nothing but eye candy for the men.

I’m not the only person that felt this way as quite a few bloggers suggested that Kanye was experimenting with Drake and didn’t have to deal with the consequences. A naïve Drake discussed the situation with MTV News after revealing that he turned down Kanye’s offer to shoot another video.

“That career move was very important to me,” he said about the career lesson learned. “I guess one thing I didn’t consider is what the song personally means to a lot of women.”

But you know who should have known better? Kanye West.

That was strike one.

The second strike comes in the form of the production that West offered to Drake for his albums. Say what you want, but what Kanye offered to Drake sounded uninspired. On Drake’s debut album Thank Me Later, Kanye produced “Show Me A Good Time” (as well as “Find Your Love” but that was with the assistance of No I.D. and Jeff Bhasker) and, to be honest, that was not up to Kanye standards. Especially when you consider that West was working on the brilliant My Beautiful Dark Twisted Fantasy and gave Rick Ross “Live Fast, Die Young.” It just never felt like Kanye wanted to give Drake his best because the two kinda, sorta shared a lane together.

Strikes 3 thru whatever number you want to come up with are documented in this feature titled “Kanye vs. Drake: A Timeline Of Their Passive-Aggressive Beef” and I’ll just let you read that and come up with your own conclusion.

For these reasons I simply cannot picture these two agreeing on the direction of an album. I don’t sense a mutual respect that allows one to take a backseat to the other. I imagine a constant tug of war that eventually leads to a haphazard project that fills in the gaps with a ridiculously slapdash guest list of friends when the two aren’t recording together.

Kanye and Drake are at two completely different points in life. Kanye is a fatherly fashionista who soaks in the reality television rays of a Kardashian while periodically formulating nonsensical rants about things only rich people care about. Drake is a forever single Southern rap loving individual who is in love with the concept of love and talking strippers down from the pole in an effort to have them dancing to his dancehall jingles at a random timestamp in whatever city he’s in.

The only things they share are deep pockets and awareness that they are Eskimo brothers courtesy of Instagram THOTs. Outside of that?

You can keep that shit.