The Evolution Of Solange: How She Became Prince To Beyonce’s Michael Jackson 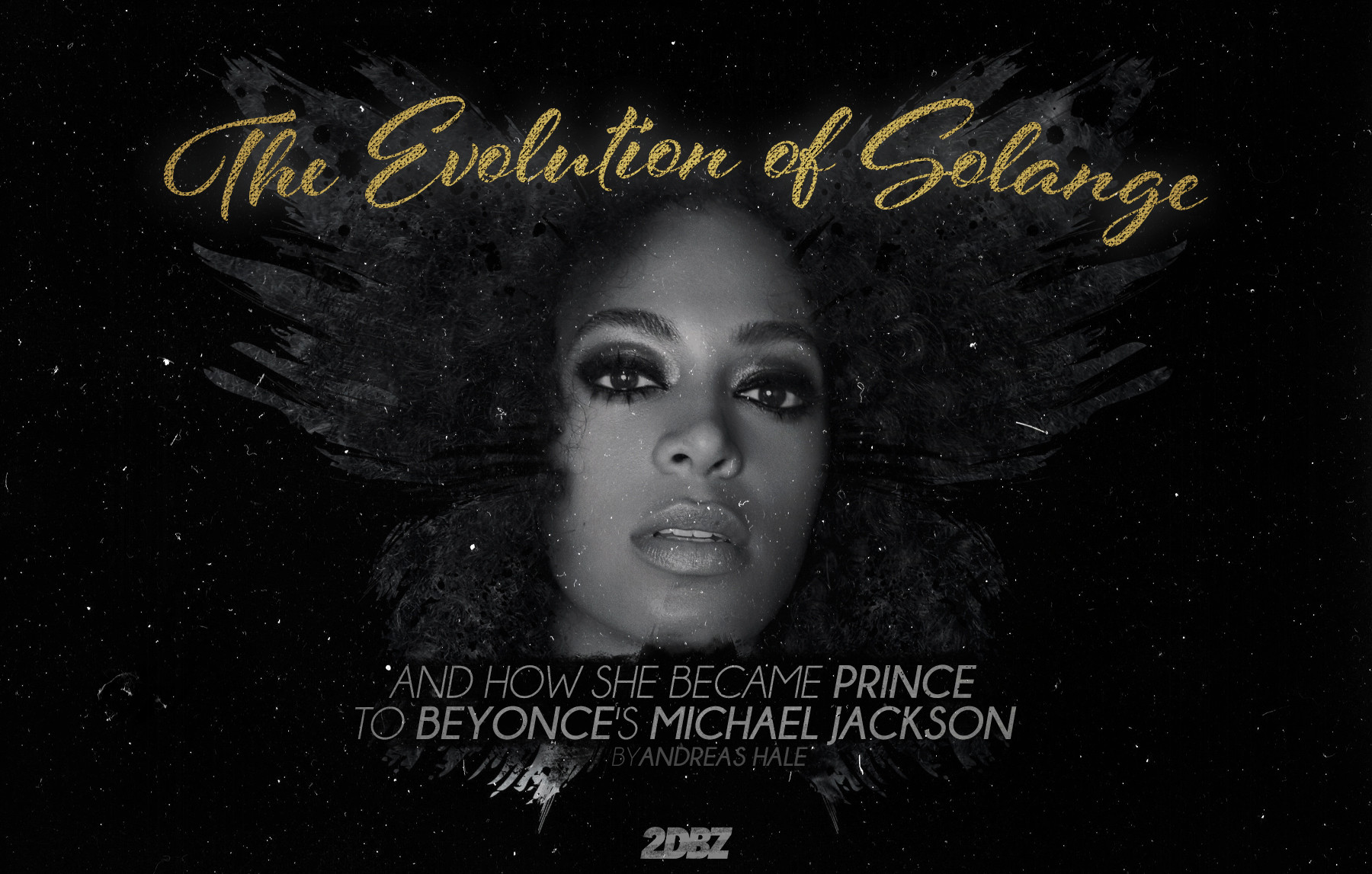 For some of you, the title is absolute blasphemy. How dare I compare either of the Knowles sisters to Michael Jackson or Prince, right? But there are some nuggets of truth in this comparison. And with the release of Solange’s A Seat At The Table, a new star is emerging that is vastly different than her older megastar sister.

Like Michael Jackson, Beyonce is a pop star before anything else. From Destiny’s Child to her stellar solo career – like Jackson’s transition from the Jackson 5 to solo sensation – she was born and bred to be a megastar of epic proportions.

Of course, the historic remnants of rhythm & blues, soul and jazz permeate through her music every now and then because she’s keenly aware of her roots and is truly a student of the game. Just like Michael Jackson studied others before him and absorbed and appropriated the foundation they laid. Whether you are aware or not, homage is constantly being paid in both of the superstar’s music. But with their celebrity comes the caveat that they aren’t quite as free as we would like to think they are. They may be the loudest voice in the room but they simply cannot be the first to make noise because of the risk involved with putting art before business.

As much as we loved Lemonade, the fact of the matter was that the risk wasn’t as great as some would like to think. The landscape of the music business had already nurtured to accept pro-black musings over music.

And that’s where Solange differs. Granted, A Seat At The Table comes at a time when All Black Everything in entertainment is acceptable. But, artistically, Solange is more outspoken and acclimated to taking risks than her sister ever was.

After releasing the ultra poppy Solo Star in 2003 at the age of 17 and punching in with film roles, voiceovers and guest appearances, Solange decided against becoming a diet version of Beyonce and faded into the background to work on her craft. She married, gave birth to her son Daniel, moved to Idaho (of all places) and began finding herself artistically. In the interim, she wrote a few hits for her sister and proved to have a strong pen game. Considering that her father/manager had originally planned to hold off on the Solange push with his energy focused on Beyonce, the little Knowles sister had other plans.

When she re-emerged in 2008 with Sol-Angel and the Hadley St. Dreams, it was evident that she had shifted artistically as the album had hefty Motown influence and was deemed a critical success but commercially flopped. However, it wasn’t built for crossover success. The target audience welcomed the album with open arms. And that’s all Solange really wanted: to speak to her audience.

In between the Hadley St. Dreams album and the creation of her 80’s inspired new wave 2012 EP True, Solange became more and more outspoken. From trashing Katy Perry for “polluting the chirrens” in 2010 to blasting Miami police for having a weapon pulled on her for carrying a banana, Solange’s pro black stance began to permeate into the mainstream.  When she lit into white music critics over a Brandy review and questioned their credentials for grading black music, she drew her line in the sand and her blackness would not be compromised.

Prince’s career has been a litany of being outspoken about political stances, African American empowerment and social consciousness. As great of a musician that Prince was, he never shied away from tackling social issues with his artistry. Prince was the definition of a risk taker. From having “slave” written on his cheek in conflict with his record label in the 90s (interestingly enough, Solange would drop “Fuck The Industry” two decades later) to being outspoken about the #BlackLivesMatter movement before his death in 2016, art and activism were one in the same for Prince Nelson Rogers.

Like Prince, Solange’s strength isn’t in her voice. Of course, Prince is arguably the most talented musician in the history of music and Solange won’t blow you away with her ability to compose, arrange and play music. But her artistic sensibilities are very similar in the vein that both are constantly searching for ways to create something different than what the rest of the field is involving themselves in.

Solange has always been about artistry and message before pandering to an audience. She doesn’t follow trends and she does what she wants without a care for the backlash she may receive. Fearlessness is Solange’s calling card. Whether it be addressing white music critics or collaborating with her favorite artists rather than those that “make sense” commercially, the 30-year-old is the yin to her sister’s yang. They are different sides of the same coin. And that’s what makes them equally fascinating.

The now infamous elevator fight (which Family Guy just spoofed) was indicative of exactly who Beyonce and Solange are. Beyonce masks her feelings and will smile in the face of adversity. She can be everything for everyone rather seamlessly while sprinkling nuggets of self-awareness in her music. But she’s not willing to risk it all like her sister is. While Beyonce is smiling in the elevator, Solange has nothing to hide. She’ll fight you in an elevator if she feels that what she is doing is right. Whether that be standing up for her sister or herself, she knows what team she plays for. And when those elevator doors open, she’s not going to smile to save face. She is who she is. And it’s a different kind of liberation that Beyonce doesn’t enjoy.

The world is Solange’s elevator and she’s willing to fight against anyone who provides resistance.

Beyonce has become an enigma of sorts. Like Michael Jackson, her personal life is a relative mystery. And that’s all the more impressive considering how many tools we have to turn six degrees of separation into one. More so because her husband happens to be one of the most influential figures in hip-hop. Everything from her pregnancy to the root of the elevator incident has been shrouded in speculation and mystery. Michael Jackson’s love life was hidden behind a curtain as well. He’d show up to an award show with Brooke Shields and nobody knew if they were dating or not. The lack of accessibility and rising speculation only added to their legend. She’s a mystery and was oftentimes wrongfully criticized for being too vanilla. Beyonce just moves differently. We would have liked her to be more vocal years ago but the past year has showcased a side of Beyonce that Questlove once told me about in an interview.

Unlike Beyonce, Solange is more relatable to the everyday individual. She doesn’t necessarily have an image to uphold and, in a strange way, having Beyonce as a sister has liberated her of any pressure to succeed on anybody else’s terms aside from her own. Her success on the charts isn’t a driving force and she’s never found it necessary to cater to the masses with her music. Prince was a similar artist who focused on doing things his way and never attempted to conform for the mainstream. You either accepted his message or you didn’t. Either way, the artistry was undeniable. Michael Jackson, on the other hand, still had to yield to the corporate ministries that he aligned himself with. But that didn’t mean he wasn’t self aware, as evidenced on songs like “They Don’t Care About Us” and “Liberian Girl.” Beyonce can make the most bubble gum of music, but she has found a way to allow her blackness to penetrate her sound. Maybe it’s because of how times have changed and professing your blackness in the mainstream has suddenly become cool.

Solange is a bit more transparent and abrasive with her stance on racial issues.

She tackles self-empowerment and blackness different than her sister did with Lemonade. Where Beyonce’s overtures of blackness were more visual than audial and brilliantly self aware through her narrative of challenging black love, Solange’s blackness is absorbed into the artistry. It’s not a fictional(?) autobiographical tale of black feminism like Beyonce’s Lemonade was. Her approach is a little more nuanced than the straightforward protest song or images of blackness. On A Seat At The Table she tackles the complexities of the fictional “Angry Black Woman” syndrome on the Lil Wayne assisted “Mad” and rejection of the black woman in America on “Cranes In The Sky.” She fires a salvo that has longed been the bane of every African American’s existence in a white world with “Don’t Touch My Hair” and reaffirms the beauty of the struggle in “F.U.B.U.”

The Master P interview that is woven into the fabric of A Seat at the Table is beautifully done and a reminder of what it really means to be self-made. Listening to Percy Miller explain his rise reminds you that African Americans that are considered to be “uneducated” can be just as intelligent and powerful as any Fortune 500 CEO. Those traits are inherently acquired. Solange’s admiration of Miller’s journey and the spirit of New Orleans are evident and necessary.

One attribute African Americans possess that is often overlooked is their strength to overcome adversity. It’s something that Solange makes sure to address and allows Master P to explain it as eloquently as possible.

“They got more drugs in the rich neighborhood than they got in the hood. A lot of their kids dying from overdoses and things like that. Think about it. Black kids have to figure it out. We don’t have rehabs to go to. You gotta rehab yourself.”

Simply put, A Seat At The Table is the stream of consciousness that has oozed from the cerebellum of Solange for years and has manifested itself during one of the uglier periods of an African American nightmare. It’s not a kneejerk reaction to Philando Castile or Terrence Crutcher. These thoughts have been volleying around Solange’s head for quite some time.

She’s effectively become the Prince to Beyonce’s Michael Jackson. Although she may never achieve the acclaim that Prince did, her artistry and transparency is appreciated.

Ultimately, the Knowles sisters are special. Different spawns of the same pair of parents. Their individual success and how they handle being black – scratch that, a black woman – in an era where African Americans are being gunned down by those who are supposed to protect and serve while an arrogant businessman who has been compared to Adolf Hitler is running for president is fascinating.

They tell their stories through different vessels but share the same blood. Beyonce made us try her lemonade from a world of lemons and Solange only wants what we deserve: A seat at the table.