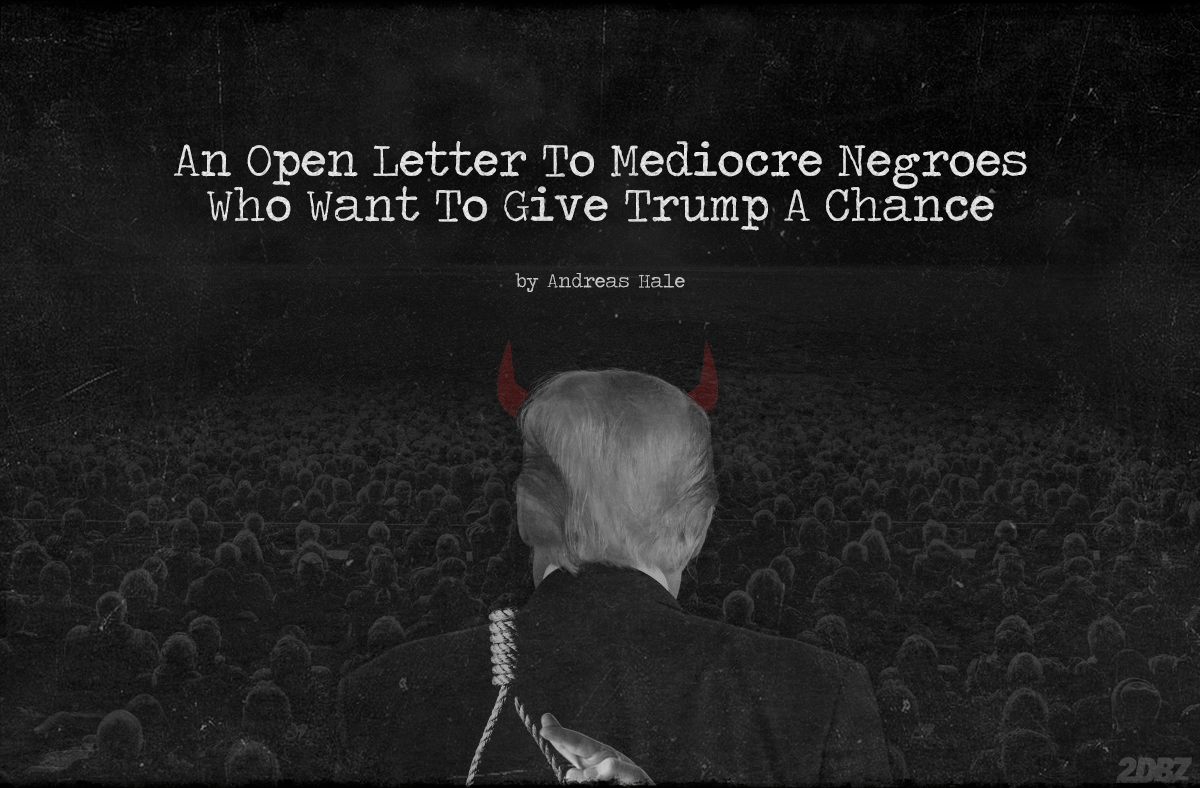 Today officially marks the day we are supposed to give Donald Trump a chance. A man with no previous political experience, who based his entire campaign on hate rhetoric and xenophobia to make America great again, is about to take his seat in the Oval Office. Regardless of whether he truly believes his own nonsensical words, he inspired a nation of “the silent majority” to vote for him.

It’s a silent majority who despised the idea and image of Barack Obama as POTUS.

It’s a silent majority who felt that they have been ignored for far too long (hilarious).

It’s a silent majority who believe that we’ve had our president to divide this country by race (also hilarious) so give them theirs to make things great again.

Nah, we don’t need to give Trump a chance. That’s complete and utter bullshit.

When a gun is aimed at you and the bullet is released from the chamber, do you give it a chance that it’s not going to hit you? Or do you make preparations to either brace for impact or not be in front of the damn thing? Sadly, mediocre negroes (word to Marc Lamont Hill) like Kanye West, Steve Harvey, Jim Brown, Martin Luther King III, Mike Tyson, Floyd Mayweather and others believe in giving AmeriKKKa’s first orange president a chance.

So let that bullet hit their unprotected flesh. I won’t be here to call 9-1-1 while they bleed out.

Why should we give their president a chance when they never gave ours one? From the day that Barack Obama took his place as the first Black POTUS, he was called a “race-baiter,” a sympathizer of terrorists (Muslims), un-American (wut?) and numerous other derogatory terms that simply did not apply. The silent majority didn’t give him “a chance,” they just gave him a lot of rope to hang himself.

All of the things he was accused of never came to fruition. But the idea that he could be all of those things struck fear in a certain group of Americans. Meanwhile, African Americans were dying in unfathomable rates by the hands of those who were sworn to protect “us.” Only, we realized what “us” they meant to protect. And it wasn’t those who looked like our president.

The sheer notion of a Black man as president and the backlash from the ignorant who thought he was going to give away their jobs, allow terrorists into the country and take an axe to white folks was scary enough. It just wasn’t true because it couldn’t be true.

The silent majority was scared of an idea. Not a reality. That’s frightening.

Barack Obama has always been the President of the United States who happened to be a Black man. He represented American interests, not the interests of only African Americans.

But some of y’all were too stupid to realize that

On April 26, 2008, I wrote a column for HipHopDX – the old stomping grounds of the 2DopeBoyz “Big 3” – titled “I Like Barack Obama, But He Can’t Do Shit For Me.” The column explained how I loved the idea of Barack Obama as president but the reality was that his hands would be tied with just how much he could help African Americans as the President of the United States. He wasn’t the President of African Americans in the United States and couldn’t spend a great deal of time in the White House focusing on issues that plague our community (i.e. police brutality). But he would serve as a symbol of hope and inspiration to young people who recognize and understand that race, religion, sex and class are still issues that divide this country. As long as we knew what he represented and understood his limitations, the weight of his presidency would be felt on the hip-hop generation.

But the fact remained that a great deal of people are not politically educated and would only vote for Obama because he was black. They didn’t care about his outlook on foreign policy, the failed war on drugs, economics, the unemployment rate or anything else. He was black and he was going to be voted for with unrealistic expectations.

The hip-hop community made their presence felt during that election. Whether the individuals involved were politically competent or not, after eight years of Bush they were determined to see change. What that change was didn’t really matter just as long as it looked different than it did before. A lack of true political education notwithstanding, they pushed to ensure that Barack Obama would become the first Black POTUS.

His presidency was symbolic more than anything else and I cherish the day when Kendrick Lamar can perform at the White House again. Because it ain’t happening anytime soon.

Eight years later, the fact holds true that Obama wasn’t able to do a great deal to change how minorities are treated in this country. From Trayvon Martin to Philando Castille, we’ve seen just how far this country has regressed in that department. However, the hope, pride and inspiration that Obama as POTUS injected in our communities were astronomical. Nobody will ever laugh at my niece and nephew like they did me when I said I wanted to be president. It’s no longer a pipe dream.

But I also knew that America would come back with a dramatic response that would remind us why America is AmeriKKKa. And I knew that the so-called “silent majority” would seek out their own symbol of “hope,” as if they ever needed one.

Donald Trump represented their hope in one day becoming a billionaire despite living in a country built on the ideal that there has to be a bottom in order for there to be a top. Wealth will not be shared. But the idea that you can one day become Donald Trump will fuel the silent majority to toil in the lower-middle class forever while helping the rich get richer. And the threat of minorities taking their jobs (word to “South Park”) will fuel their greatest fears that they will never live the American Dream.

And the fear of non-white people “trumps” everything.

January 20, 2017 marks the day that Donald J. Trump will officially paint the Black House white again. The silent majority will celebrate their victory while a certain section of minorities will be fooled into thinking that this man – who has never cared about the conditions they came out of – will do something during his presidency that Barack Obama did not.

When I see Kanye West, the man who once said “George Bush doesn’t care about Black people,” taking pictures with Trump, I’m saddened. When I see Jim Brown and Steve Harvey shamelessly used as a prop by a man who never voiced concern about our community, I’m disheartened. When I see Chrisette Michele accept an invitation to perform at his minstrel show, I feel disrespected.

What do these people hope will happen during Donald Trump’s presidency? Do they “hope” that the silent majority will embrace them? After all, Kanye West has been chasing rich and white acceptance his entire career. But he damn sure didn’t get an invite to the inauguration because it needed to be “traditionally American.”

Just as Barack Obama was a symbol of hope, Donald Trump has been a symbol of hating on that hope and calling it something different. Remember, this was a man who led the charge on the birther movement and openly questioned if Barack Obama was born in the United States. He’s a troll who inspires a legion of trolls to be divisive individuals. If you voted for Trump to make America great again, you must realize that America has never been “great” to minorities. So your greatness is our depression. The sooner you acknowledge that, the better.

Just like Obama, Trump is a symbol that inspired a group of people who believe in that bullshit to vote for him. It’s good business. And he’s all about business. Who it affects in the process doesn’t matter just as long as he gets what he wants. And if the aftermath is setting us back 400 years, so be it. He knows who it will affect and who it won’t. Some of these mediocre negroes think they are an exception in Trump’s America. Remember, Lil Wayne said the following about Black Lives Matter:

“That just sounds weird, I don’t know, that you put a name on it. It’s not a name, it’s not ‘whatever, whatever,’ it’s somebody got shot by a policeman for a fucked up reason… I am a young black rich motherfucker. If that don’t let you know that America understand that matter these days, I don’t know what it is. [Points at cameraman] That man white, he’s filming me: I’m a nigga. I don’t know what you mean, man. Don’t come at me with that dumb ass shit, ma’am. My life matter. Especially to my bitches…I don’t feel connected to a damn thing that ain’t got nothin’ to do with me. If you do, you crazy as shit. You. Feeling connected to something that ain’t got nothing to do with you. If it ain’t got nothin’ to do with me, I ain’t connected to it.” — Lil Wayne

That’s exactly what they want him to say.

But, again, do you see Kanye getting an invite to Trump’s inauguration? It’s symbolic of being used as propaganda but not receiving an invite to the proverbial seat at the table.

The bullet of hate has been out of the chamber. I was smart enough to be far, far away from that gun when the bullet was fired. But for some of y’all, you’ll just sit there and be used as a crash test dummy and hope that this man will take heed of your issues.

Don’t worry, you’ll bleed out soon and “hope” for help.

An Open Letter To Mediocre Negroes Who Want To Give Trump A Chance was last modified: March 31st, 2018 by Andreas Hale
Tags:2dope, not our president
Share:
Previous Post