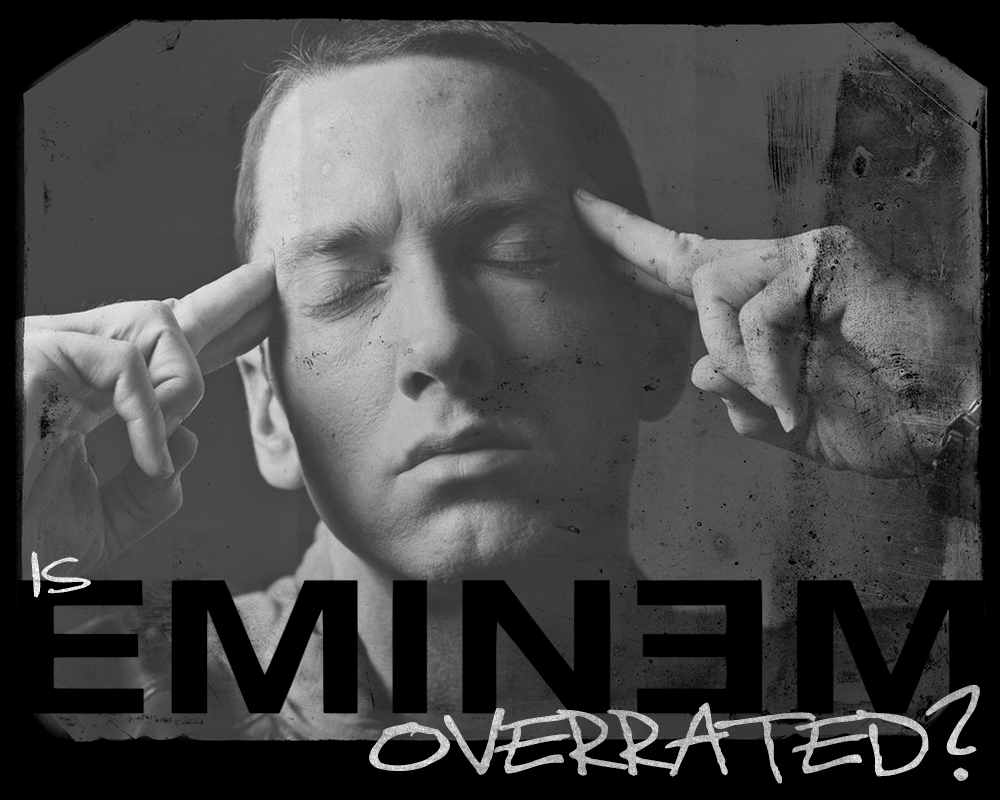 This is your moment, and every single minute you spend
Tryna hold on to it because you may never get it again
So while you’re in it, try to get as much shit as you can
And when your run is over, just admit when it’s at its end
— Eminem, “Till I Collapse”

Has Eminem held on too long? It appears that is the prevailing thought at this current point and time when each of his guest appearances have been met with a similar set of criticisms for the past decade.

There are those who believe that Eminem should take his own advice that he offered on 2002’s “Till I Collapse” and call it a career because the allege that he doesn’t have “it” anymore. And whatever “it” is appears to be damaging his status as one of the greatest emcees of all-time. And it has all led to the question: Is Eminem overrated?

This question is only three words but the answers are certain to be all over the place and most will come with a qualifier. And that qualifier almost always has to deal with what era of Eminem we are discussing.

As always, the sighting of Slim Shady’s name on a tracklisting sent the internet in a frenzy as curiosity piqued at what Eminem would offer Big Sean on “No Favors” from Sean’s fourth studio album I Decided.  And when the song was made available, the responses were swift and scattered.

There were those who pinpointed that Eminem has relied on the same shock topics for nearly two decades and have grown weary of his shtick that leans heavily on pop star references, overt references to rape and other sublime lyrical acts. Others praised Eminem’s multi-syllable wordplay and knack for bouncing a witty punchline off your skull as he managed to weave through a usual battle rap into political territory.

Neither answer is really incorrect, as Eminem has truly become an acquired taste like caviar or White Castle. Some appreciate the highbrow antics and the technique while others believe he’s still up to his cheap tricks that appeal to the lowest common denominator.

And what has now been coined as Eminem’s “cheap tricks” are exactly what has worn down listeners over the years.

Once upon a time, society wasn’t as sensitive to his subject matter as they are today. Don’t get me wrong; Eminem has always rubbed people the wrong way with his crass, misogynistic, homophobic and abusive lyrics. But what was deemed as overreaction by certain sectors of society is now taken at face value and overwhelmingly railed on.

It’s difficult, but if you remove the fact that Eminem lacks melanin as a crutch or a booster, the question has always remained whether or not he would have gotten over as much as he has with those same tactics since setting the music industry on fire in 1999. But there should be little doubt that his technical ability is without peer and he dominated the era he was in. And you simply cannot take that away from him regardless of whether you enjoy has recent lyrical contributions or not.

Technically speaking, Eminem is almost untouchable on the microphone. His rhyme patterns and schemes are otherworldly and he almost always demonstrates a student of the game mentality whenever he is being interviewed. You don’t necessarily have to agree with his lyrical content to concede that point. But the other half of the equation is the actual words he puts together over a beat. And that is what has separated him from being a style over substance rapper. When it comes to a battle emcee, Eminem checks all the boxes. The complexity of his rhyme schemes were only magnified by the wit and humor he managed to stuff into his rhymes. It’s hard to deny the lyrical brilliance of “Just Don’t Give a F*ck,” “Any Man,” “Threesixfive,” and “Kill You.”

Eminem didn’t deliver lyrical poetics in the vein of Nas and Rakim. His brand was more along the lines of Eddie Murphy “Delirious” where you are taken back by how his mind operates to come up with lines that are so laugh out loud hilarious.

However, even your greatest magic trick becomes old hat when done over and over (and over) again for well over a decade. And the fact of the matter is that Eminem’s lyrical content hasn’t aged well over the years. While songs such as “Rap God,” “Forever” and “3AM” all showcased that he can still mince bars with the best of them, there have been a few instances where fans have been underwhelmed with his work.

Some believe that these moments have hurt his standing among hip-hop greats and may have eliminated him from the Top 5 conversation. To penalize him for being around for as long as he has is just as ridiculous as suggesting that The Notorious B.I.G. shouldn’t be among the greats because he died too soon.

Without diving too far into the subject that will be saved for a future column, greatness in hip-hop has a small window. Just about all of your favorite rappers hit a wall of some sort creatively. Hell, this conversation can extend to other genres of music as well. Not all of Prince’s work was as well received as Purple Rain, Sign O’ The Times or Love Sexy. But his place among the greatest musicians on earth will never change. And, for the most part, Prince’s greatness has been defined by three to five albums out of 39 studio albums.

I got a list, here’s the order of my list that it’s in
It goes Reggie, Jay-Z, 2Pac and Biggie
Andre from OutKast, Jada, Kurupt, Nas, and then me
But in this industry I’m the cause of a lot of envy
So when I’m not put on this list, the shit does not offend me
— “Till I Collapse”

Nah, Em. You should be offended.

What he accomplished during his torrid run unquestionably places him among the greats. And regardless of whether you love or hate what he’s doing today, there simply is no way to suggest that he’s overrated by any stretch of the imagination.

When Vince Carter participated in the 2000 NBA Slam Dunk contest, the world was in awe of his spectacular and relatively unseen arsenal of dunks. It was evident that he had changed the game by the time that he dangled from the rim from his elbow with his final dunk. Nobody had seen anything like it before and it spawned a plethora of young ballplayers who spent their years trying to emulate Vin-Sanity.

Years later, many of those innovative dunks that Carter threw down with panache and gusto nearly two decades ago are routinely done by this new generation of ballplayers. A reverse windmill is treated the same today as a between the legs dunk was in 2000. And the between the legs dunk that Isaiah Rider brought the house down with in 1994 is treated the same as a dunk from the free throw line was in 2000. And the free throw line dunk that Michael Jordan made famous in 1988… you get the picture.

When Eminem arrived, there was nothing like him (although many would argue that he was a melanin deficient version of Chino XL). Skin color aside, Eminem treated every instrumental like his personal dunk contest. He abused bars and staggered listeners with a barrage of multi-syllable lyrics that were absolutely ridiculous. “The Way I Am” was his reverse windmill dunk while “Forgot About Dre” was his elbow hang and “Lose Yourself” was his between the legs bounce dunk.

But when you’re relying on the reverse windmill in 2017, it doesn’t land with the same shock and awe. Granted that there are still a remote few that can actually do it and it’s quite impressive that he can still pull it off at 44, but the innovation is no longer there.

Does anybody suggest that Vince Carter’s performance in 2000 is overrated? If they do, chances are that they were too young to truly understand the significance and impact of Carter’s thrilling exhibition. The same can be said for those who don’t see what the big deal was when Dominique Wilkins and Michael Jordan went toe to toe in 1988.

And that same argument can be utilized when discussing whether or not Eminem is overrated. There’s no doubt that he was at the top of the game and without lyrical peer from 1999 to 2002. For proof, look no further than the rinse cycle he put Jay Z through on “Renegade.”

Obviously, there’s a pretty significant difference between lyrical and athletic ability but the parallels are still there.

Maybe “No Favors” isn’t his best work and the Eminem that you loved a decade and a half ago is no longer here. But he’s still better than a majority of the talent that exists today. His subject matter may not have aged well but there’s no denying his greatness.