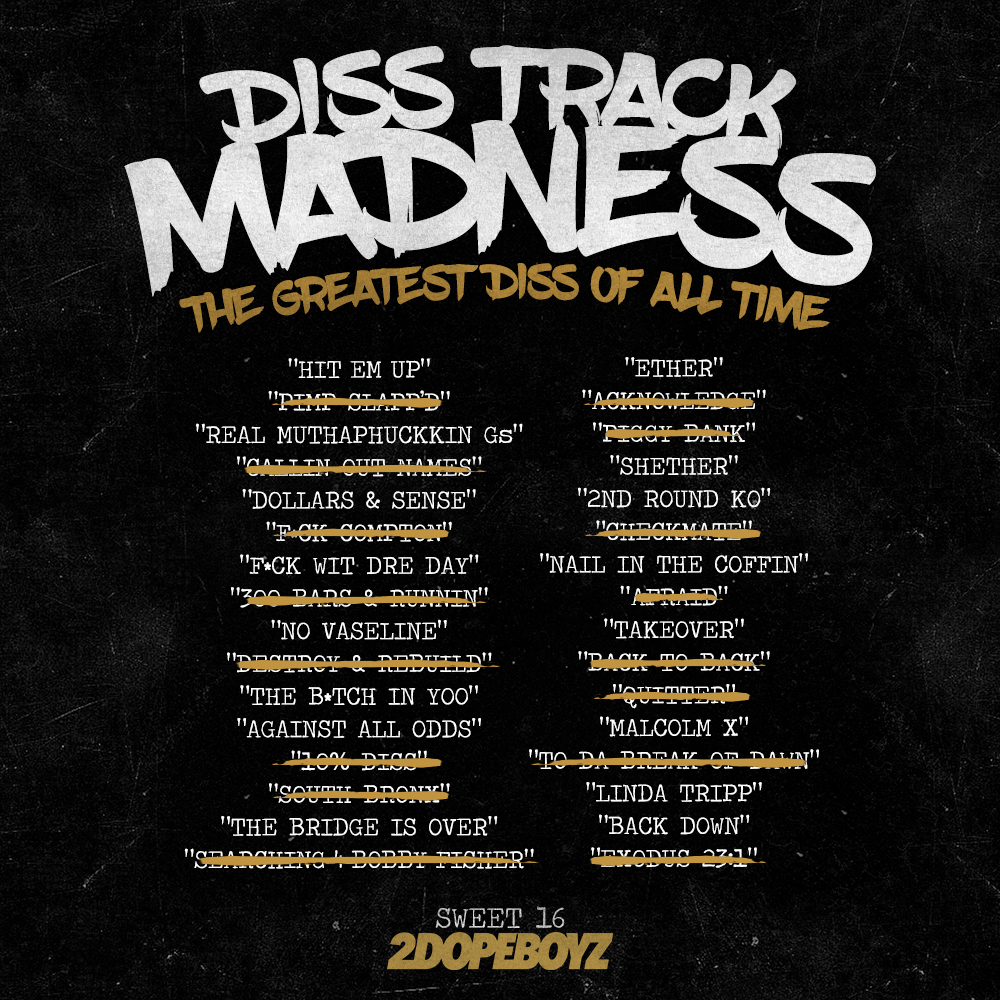 No longer a field of 32, we’re now down to the Sweet 16 match-ups. Check out how everything stacks up below and hit up the tourney page to vote.

The early favorite in our tournament is 2Pac’s “Hit ‘Em Up.” Still one of the most bitterly-recorded diss tracks in history, every word that spewed from ‘Pac and The Outlawz was rife with venomous anger. But don’t sleep on Eazy-E’s “Real Muthaphukkin Gs,” which dragged Dr. Dre, Snoop Dogg, Suge Knight and Death Row Records through hell and high water and was one of the more understated songs in the tourney.

DJ Quik’s “Dollaz + Sense” was foul in every sense of the word (no pun intended). One of the first “diss songs you could dance to” (at least, in the West Coast), the song is considered to be the one that brought an end to Eiht’s rap career. However, Quik has to go against the opening salvo on Dr. Dre’s The Chronic, “Fuck Wit Dre Day (And Everybody’s Celebratin’),” a tripartite verbal assault on Eazy-E, 2 Live Crew’s Luke Campbell and Tim Dog. And no, the irony that Tim’s “F*ck Compton” lost to “Dollaz + Sense” is not lost upon us.

Ice Cube vs. Common, again. Common’s “The B*tch In Yoo” was a scathing response to the Westside Connection’s “Westside Slaughterhouse,,” which was a reactionary song to Common’s “I Used To Love H.E.R.,” in which he rapped about falling out of love with hip hop when it made the transition to gang-oriented music thanks to songs like – you guessed it! – Ice Cube’s “No Vaseline.” Meanwhile, “No Vaseline” proved that Cube would do just fine without N.W.A. N.W.A, on the other hand? Not so much.

Boogie Down Production’s “The Bridge Is Over” needed some help from the fan vote to push it past Evidence’s “Searching 4 Bobby Fisher.” The song may need that once again — and more — to defeat 2Pac’s “Against All Odds,” which smoked the boots off of LL Cool J’s “To Da Break of Dawn.” However, with “Hit ‘Em Up” already in the Sweet 16, “Against All Odds” could be Pac’s sacrificial lamb.

This 2nd round matchup is certainly poetic as Remy Ma’s skull crushing of Nicki Minaj on “SHEther” meets it’s predecessor in Nas’ tongue lashing of Jay Z on “Ether.” Nas didn’t struggle much with dispatching the overmatched (but criminally underrated) “Acknowledge” by Masta Ace while Remy had a bit of a tougher time giving 50 Cent’s “Piggy Bank” the boot. Who will stand tall after this round?

Although Canibus and Eminem battled in the past, it was at a time when Canibus was far from the rhyme animal that was brutalizing everything in sight. So the second round throwdown between Canibus’ romp on LL Cool J with “2nd Round KO” and Eminem’s “Nail In The Coffin” is a far more fitting matchup, despite their targets not being one another. Canibus faced a stiff challenge in Jadakiss with “Checkmate” but the sheer force that ‘Bis came with was strong enough to sway both the readers and the DopeHouse his way. Meanwhile, Eminem had no problems giving Joe Budden the boot with his burial of The Source and Benzino on “Nail In The Coffin.” Both were potent, but which was the more vicious diss track that will earn a berth into the next round?

Jay Z ran roughshod over Drake with his takedown of Nas and Prodigy on “Takeover,” and it wasn’t even close. His opponent comes in the form of Royce Da 5’9”, who defeated his Bad Meets Evil partner’s “Quitter” by the most narrow of margins in the first round as the DopeHouse was split and the reader vote gave Nickel the edge by just a few votes. Will Royce have enough venom left in the tank to pull off the major upset against Hov, or nah?

Perhaps the biggest upset of the first round was El-P’s vicious verbal beatdown of Sole courtesy of Company Flow’s “Linda Tripp” taking out the legendary “South Bronx” by Boogie Down Productions. How did it happen? Well, if you go bar for bar, what El-P did to Sole may not have been big in the mainstream, but it was one of the most well put together diss records we can remember. From the use of the woman who recorded her phone call with Monica Lewinsky to kick off the Bill Clinton scandal to El comparing himself to The Beatles on The Ed Sullivan Show, it earned the nod from us. The opponent will be 50 Cent, who shoved Pusha T’s “Exodus 23:1” with his assault that essentially ended Ja Rule’s career on “Back Down. Will the cinderella story of this tournament pull off another upset or will 50 Cent’s takedown of one of the biggest artists in music prevail?