The Hypocrisy Of Living: If Kendrick Lamar Died Tomorrow, He’d Be The GOAT 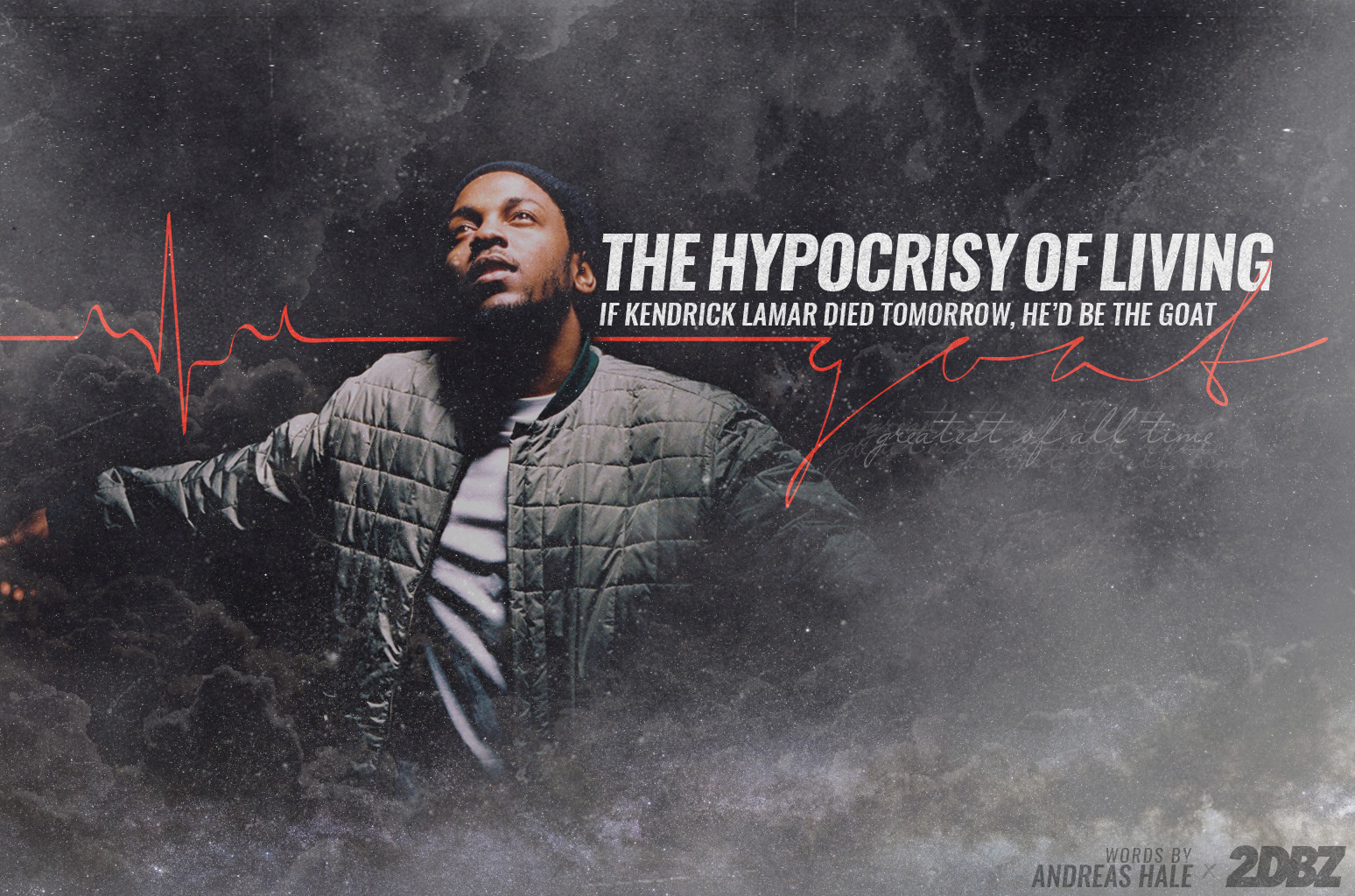 The only thing standing in the way of Kendrick Lamar and the greatest rapper of all-time title is the fact that he’s still alive.

Read those words out loud and let them sink in.

And, let’s be clear, the concept of the GOAT is unquantifiable because there are so many variables involved in the fictional debate of who the #1 rapper in history is. But this isn’t necessarily about Kendrick Lamar being the GOAT rather than deserving his rightful place at the table.

To be perfectly honest, we wouldn’t be having this conversation about Kendrick Lamar’s place among the greatest rappers of all-time if he were dead. And that’s the miserable aspect of this harsh reality. This is the hypocrisy of living. Nobody wants to give you your flowers while you’re around to smell them. But, when you’re gone, everybody acts like they have always appreciated you.

It’s fascinating how death always seems to enhance your character once you are gone. And this concept goes for everyone, not just rappers. Watch how people react to anyone who passes away and how these adjectives of greatness become attached to their name. On one hand, nobody is sincere about his or her feelings when somebody passes away. On the other hand, the veil of fear that surrounds being honest and outspoken about your true feelings are lifted once that individual is no longer here.

Case in point: There was a fear when J Dilla was alive to call him the greatest producer of all-time by those who truly believed it. However, people who have never truly indulged in Dilla echo that sentiment to nausea and, in effect, cause a backlash. And then there are those who never thought Dilla was that great to begin with. Those individuals are fearful to let their true feelings be known.

This is where we are with Kendrick Lamar. An emcee so remarkably talented that we are all trapped in this pseudo purgatory where it’s too soon to call him the greatest rapper alive until it’s too late.  By the time he is universally recognized as one of, if not the, best to have ever done it, he won’t be around to soak in the accolades. Or, we wait for the precipitous fall from grace that seems to happen to every rapper who comes near the lauded mountaintop.

The universally acknowledged greatest rappers of all time, Biggie and Tupac, were never afforded the opportunity to fall from grace. They were removed from this earth early enough that we wouldn’t have to speculate “what if” and could judge based on what was already there.

What usually happens is that the emcee ends up living too long and begins to descend down the fictional list by virtue of deterioration. Don’t believe me? Let’s take a look at the career of Ice Cube. From 1988 to 1992, O’Shea Jackson couldn’t miss. From his work to make a group of guys from Compton the world’s most dangerous rap group to departing and launching into a stellar solo career with a trio of critically acclaimed albums (AmeriKKKa’s Most Wanted, Death Certificate and The Predator) along with a sizzling EP (Kill at Will), Ice Cube was a cultural icon and a rock star.

Imagine if he died right around the time the video for “Check Yo Self” was released. There would be no question regarding his place among the greats. However, he ended up doing himself a disservice by living past the age of 30. The quality of his music from that point never compared to his early work and it affected his placement on the list. But if he wasn’t afforded the opportunity to fall, he’d rank highly on the list. Granted, there are individuals who are wise to bottle up his best years and use that in their argument. But, overall, he’s no longer recognized as a top 5 emcee. Hell, LL Cool J was in everybody’s G.O.A.T. list until he completely annihilated his credibility with a series of terrible albums during the second half of his career. Nobody talks about James Todd Smith being the greatest anymore.

Let’s take it a step further. If Lil Wayne died in the midst of his torrid run from 2004 to 2009, he would likely be ranked a lot higher on the G.O.A.T. list than he does today. Deserving or not, this is how death works. Especially in this current culture of hip hop.

Nowhere else do you see this happen. Muhammad Ali and Sugar Ray Robinson are often recognized as the two greatest boxers who ever lived. However, both faltered down the stretch of their respective careers. Nobody has held that against either of them. Everyone prefers to erase Michael Jordan’s years as a Washington Wizard from their memory banks and allow those pair of three-peats to firmly establish him as the G.O.A.T. Michael Jackson and Prince weren’t penalized for their later work because what they accomplished prior to that had already entrenched them in the G.O.A.T. conversation.

But hip hop is a different story.

Although music is subjective, there’s really no dispute that Kendrick Lamar has released four consecutive albums worthy of high critical acclaim (five, if you choose to include untitled unmastered). And you can almost guarantee that if you ask a room of 20 individuals what the best Kendrick Lamar album is, you’ll get four different answers with a variety of reasons.

And DAMN? Well, what he accomplished with his fourth studio album has been nothing short of mindboggling.

With each of Kendrick Lamar’s albums, he has attempted to find answers to problems that have only grown bigger in stature. He wanted to figure out the challenges of making a great album on Section.80 by blending deft storytelling with profound poetic ability. Then he sought to resolve the problems in his neighborhood on GKMC by using his own plight as the moral compass. And then he took on the challenges of being black in America on To Pimp A Butterfly by incorporating a sound the personifies blackness against a racist backdrop with lyrics that relentlessly confronted the social hypocrisy. Now, he’s attempting to solve the challenges of spirituality on DAMN by delivering a reverse order narrative on the complexities of being a human being.

There are few great thinkers in this world. And even fewer who are able to apply this concept to their craft. DAMN in an amalgamation of his three previous albums that challenges the universal inquiry of the purpose of life. All the while by making enjoyable music that captivates. He has style to go along with his substance and, like a great filmmaker, can appeal to his audience in a variety of ways. It’s one thing to make a film of significance, but how do you make it entertaining to an audience that truly doesn’t give a damn about the gravity of the topics you are addressing? His voice is the actor with undeniable ability no matter what role it is playing. His production is the set that brings everything to life. He doesn’t have as much control over the set as he does the acting but knows how to pick the right locations. But as the director, he knows how to edit, knit, sew and sequence everything properly to make a beautiful and engaging listening experience.

The replay value is present; as a keen ear will notice the hints that this album should be played in reverse to truly understand the journey. There’s no doubt that songs such as “FEEL” and “Duckworth” are brilliant passages that provide substance. And then there are the action sequences (“DNA” and “HUMBLE”) that captivate with their raw energy.

He’s four studio albums deep and delivered four totally different listening experiences. Whether you are willing to call each individual album a classic or are partial to one or two of them, the fact remains that we haven’t seen this kind of consistency from a solo artist in hip hop…ever (OutKast accomplished the feat previously). Not by Ice Cube, Nas, Jay Z, Tupac or Eminem. All have come close, but haven’t delivered in succession.

But despite all of the accolades that separate him from his legendary peers, here’s what happens when you ask somebody right now if Kendrick Lamar is the greatest rapper of all-time:

It’s a kneejerk reaction to the question because people are uncomfortable recognizing greatness while it is still here. If you watch how Rude Jude reacts to Justin Hunte’s inquiry as to why he said no, you’ll see Jude stumbling in an attempt to draw a parallel to sports. The problem with his analogy is that a rapper isn’t graded against their competition. As much as we like to put Kendrick Lamar up against Drake, there’s really no head to head competition between the two. Kendrick’s work isn’t only up against the current slate of emcees; he’s up against history. And he has proven to fare quite well.

This reaction isn’t Jude’s fault. We are predisposed to say no. It’s interesting because we live in a time where instant gratification is the norm. But even the hottest of hot takes have boundaries. Everything lives in the now, but will stop short of forever. And to suggest that Kendrick Lamar is the greatest of all-time is a “forever” concept that won’t be forgotten tomorrow during our next conversation about whatever it is that Twitter feels like discussing.

Terms like all-time and forever are concrete. For whatever reason, “classic” is not. “Classic” has become a term that lives in isolation with a moment. All-Time is pretty simple to define. Nobody wants to be handcuffed to a statement like that and be made a fool of if they are wrong. And for us journalists, our word lives forever. So the fear of coining Kendrick Lamar as the G.O.A.T. is that it could blow up in our face.

But what if he was dead? Well, dead is definitive. He can’t come back and drop a string of mediocre albums in the afterlife (although Tupac would argue on the contrary) that would devalue his craft.

Here’s the thing: Even if he did manage to drop an album that was mediocre, he’s already cemented himself among the greats due to his tenure and catalog.

Here’s a list of the rappers most commonly brought up during G.O.A.T. conversations.

The artist formally known as K Dot already has a tenure longer than both Notorious B.I.G. and Tupac as he’s entering his 8th year. In terms of critical acclaim from reputable outlets, you can put his four studio albums up against any of the aforementioned artists and have an argument that his catalog stacks up better overall (Biggie is disqualified because he only has two studio albums before his death).

For every emcee mentioned, it’s relatively difficult to nail down a fourth album that is on par with the rest of their high points. God’s Son, Vol. 2 and Encore especially fit this narrative.

With a tenure longer than the two rappers who sit atop the GOAT conversation and a catalog that rivals everyone mentioned, is there any other reason that he’s not on the short list aside from the fact that he’s alive?

Kendrick Lamar deserves to smell his flowers before he’s gone. Did we have to wait for Michael Jordan to retire or did he wrap up the G.O.A.T. title somewhere in the midst of his second three-peat?  Waiting for failure, or even death is unacceptable. It’s a coward’s way out of taking a stand. Recognizing greatness while it is still here has proven to be a significant challenge that few are willing to accept. But we – especially journalists – should be brave enough to make that claim and back it up.

And it shouldn’t take an artist’s passing to grant him entry into the conversation.