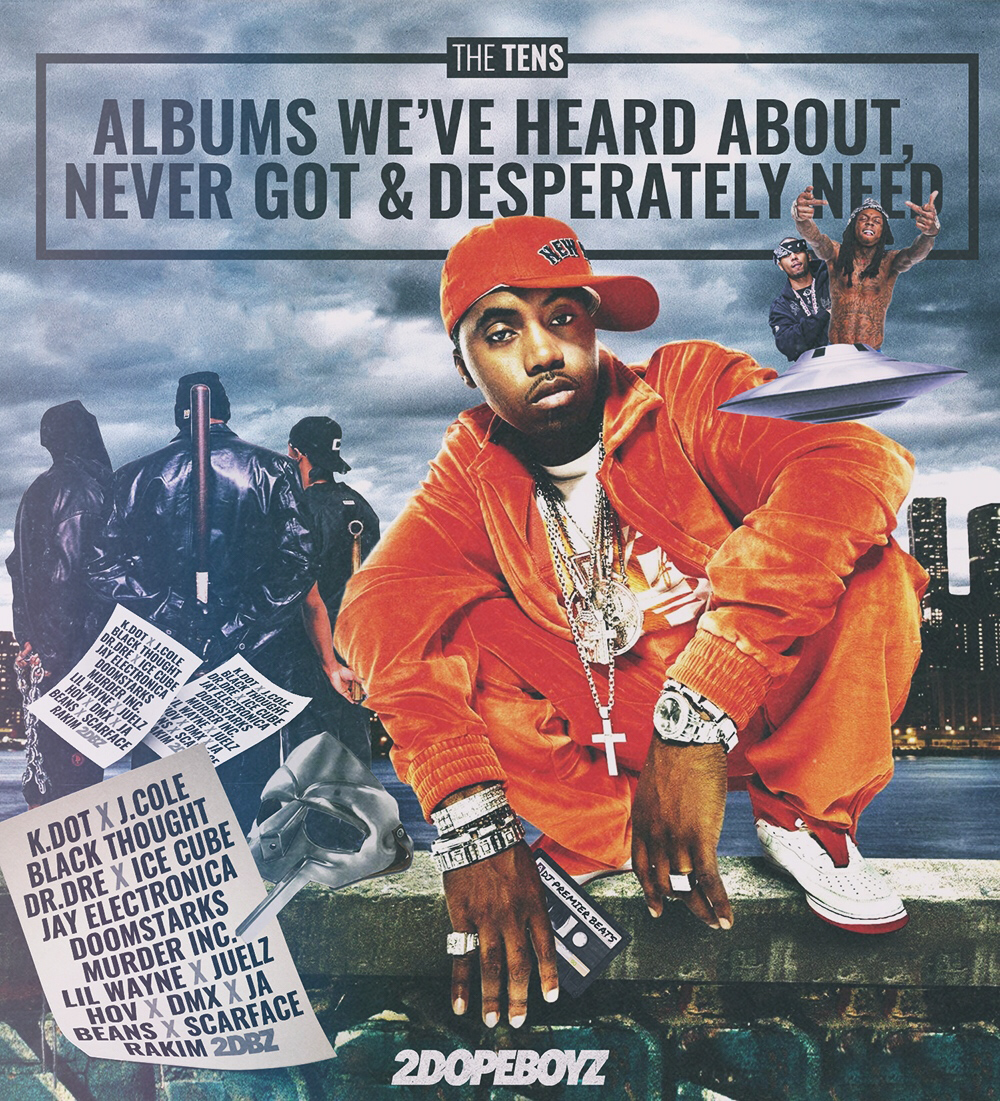 Hip Hop is notorious for teasing us with these great projects only for them to never see the light of day. Like a Marvel Team-Up, we salivate over the possibilities of seeing our favorite emcees record a project with another superpower. But maybe the idea sounded good at the time and the parties involved simply couldn’t find the artistic space to record what they know fans would love. Or, it could be the dreaded evil known as LABEL POLITICS that pulls down its pants and takes a shit on our dreams. You also have those artist who are simply too bogged down with whatever they have going on in their life where dropping an album is more of a nuisance than a necessity. Over at The House of Dope we compiled our list of fictional albums that we thought we would be gifted with but, for one reason or another, it never happened. 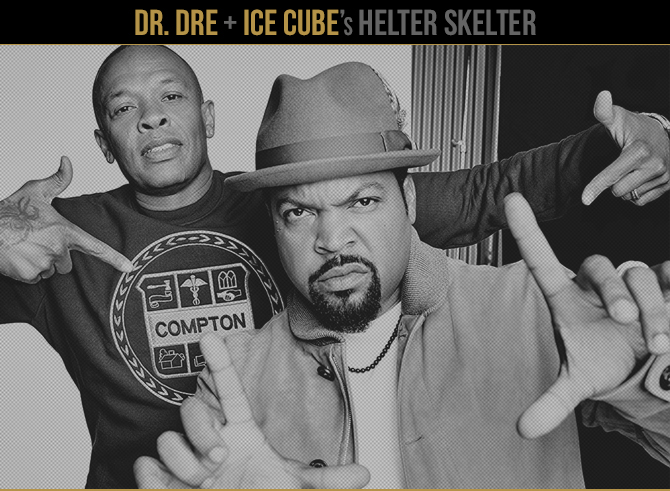 The lore behind Ice Cube and Dr. Dre’s mythical collaborative album is, as always, tied to the life and times of NWA. Following his acrimonious split from the group in 1989, Cube and NWA would spend the next few years dissing (and, at the New Music Seminar in 1990, throwing hands at) each other until NWA’s own demise in 1991. However, the original members would settle their issues — that is, once Eazy-E fired his longtime manager Jerry Heller — and planned to drop their third album with Cube in the fold (who had been absent since Straight Outta Compton) until Eazy’s death in 1995.

However, Dre and Cube had plans to drop Helter Skelter for seemingly decades. Cube made a cameo in Dre’s “Let Me Ride” video in 1993, and the two formally reunited on “Natural Born Killaz” in 1994. MC Ren would join the two on 2000’s “Hello” and “Chin Check,” and talks of both Helter Skelter and NWA’s third album — with Snoop Dogg in the fold, this time — surfaced. Yet, like Detox, Rakim’s Oh My God (another album on this list) and countless others, it never came to be. — Meka Udoh 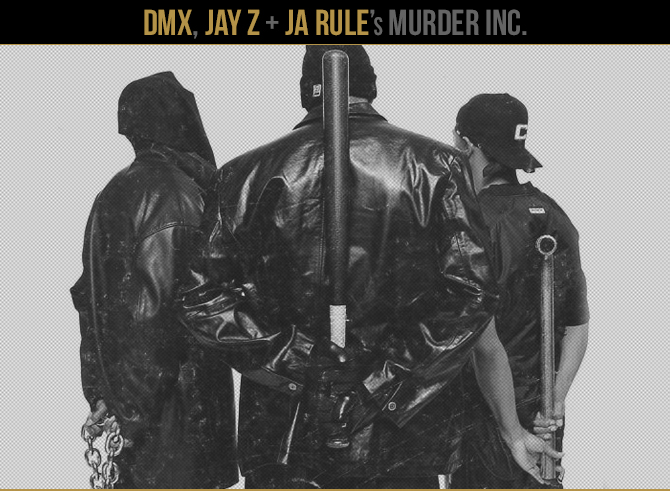 In the 1930s and 1940s, Murder Inc. was the name of organized crime collective of various mob groups in New York. In 1991, it was the name of an industrial music supergroup. In 1995, the name had been co-opted for another potential super-group: JAY Z, DMX and Ja Rule.

During the nascent stages of their respective careers, the trio would appear on Mic Geronimo’s “Time to Build” in 1995, and they would collaborate on a string of heatrocks over a span of five years: “Murdergram,” “It’s Murda,” “Time To Build,” “Money Cash Hoes,” Busta Rhymes‘ “Why We Die,” “Grand Finale,” and several others. Yet despite an album’s worth of songs together, with each members’ individual success an actual album never came to fruition.

“It was a situation where egos all just played a part in its demise,” Ja told MTV. “We couldn’t get X and Jay in the same room, from long ago, their storied battle on the pool table, guns out [and] all of that.”

We all know the rest: Jay would become one of music’s most successful artists of all time, DMX would battle a variety of demons over the years, and Ja Rule would become a Nigerian scammer now facing multiple lawsuits from the Fyre Festival catastrophe.

The three did reunite, however, backstage at Beyonce’s final Formation World Tour stop in 2016. 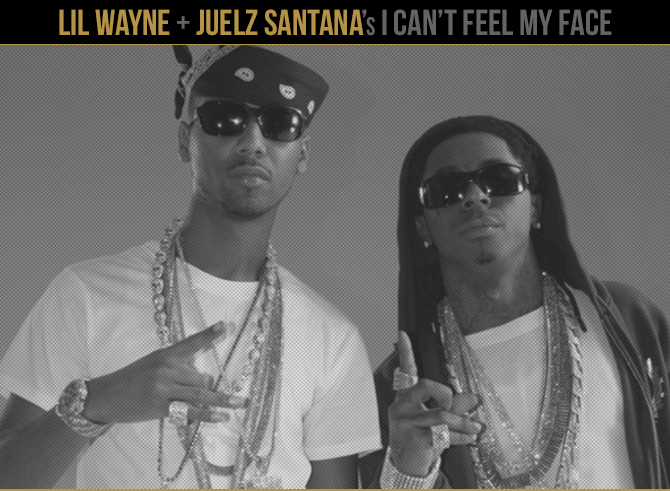 Once upon a time (around 2005), Juelz Santana was like molten lava hot. Dipset was running shit and it appeared that Santana was going to be a bonafide star. Meanwhile, Lil Wayne began to really pick up steam as a solo act with Tha Carter and Tha Carter II garnering critical acclaim. A collaborative mixtape was announced and fans salivated over the possibilities. However, Lil Wayne became a massive star and that somewhat ground the process of creation to a halt with Weezy recording what felt like an infinite amount of guest spots. According to Santana, label politics managed to finally doom the project. One can only imagine what that mixtape would have done for Santana’s career considering that it was at the height of Weezy’s rise. — Andreas Hale 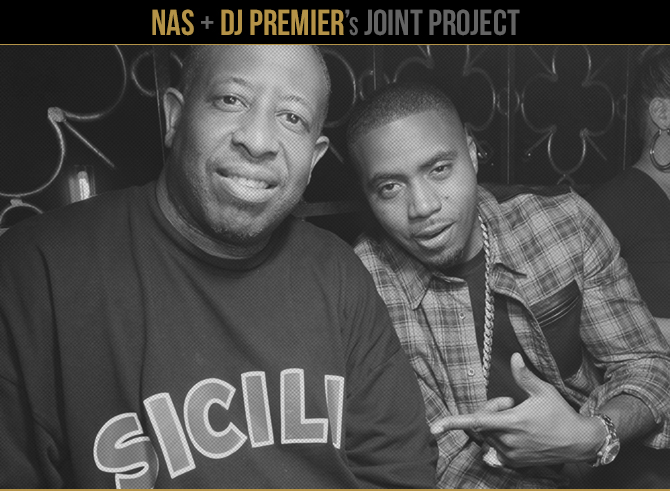 Nas and DJ Premier have had a musical relationship that goes back over two decades. Starting with 1994’s Illmatic, the two would collaborate on Nas’ first five albums, resulting in classic tracks like “Nas Is Like,” “2nd Childhood” and “I Gave You Power.” The two would constantly talk about doing a collaborative album for what’s seemed like forever, and yet nothing — absolutely nothing — would come from these talks.

Think about this for a second. Fifteen years after “Boom,” we got a Royce 5’9” x Preemo album, PRhyme . Hell, they even have plans to release a second project together. We even got a Dr. Dre and Preemo collab, “Animals,” off Dre’s Compton (which, while it wasn’t Detox, was technically the long-awaited follow-up to 2001). Yet, in spite of all of this, Nasir and Chris can’t find a studio together? Oh, and let’s not forget about Nas and Common‘s Nas.Com, Premier and Pete Rock, and all the other ideas we’ve been teased with over the years. We need a board. — Meka Udoh 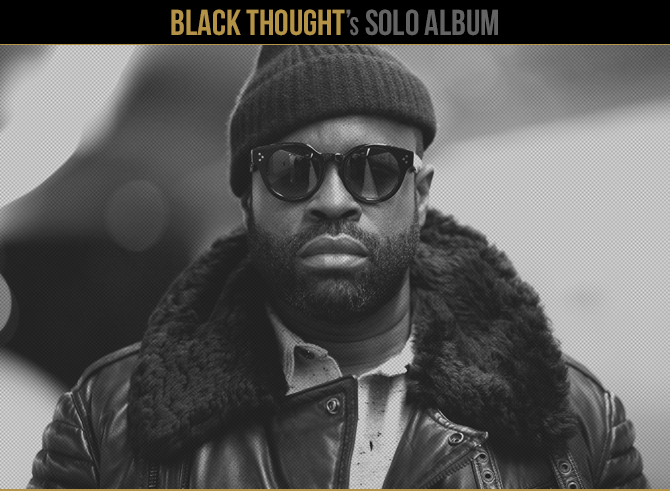 After The Roots released Things Fall Apart to critical acclaim, it felt like the time was right for a Black Thought solo album. A couple of tracks began to float around on the net in the form of “Hardware” and “Mona Lisa.” The buzz began building but once Thought and The Legendary Roots Crew realized that the solo outing wouldn’t count towards The Roots contractual obligations to the label and the album was subsequently scrapped. Many of the songs ended up helping shape the Phrenology album. Interestingly enough, isn’t every album from The Roots like a solo Black Thought album? Apparently this would have been all about the aesthetics. Oh, and what about Thought’s joint project with DangerMouse?! Based on “Mad Nice” with DOOM, Dangerous Thoughts (or whatever they were gonna call it) would’ve been epic. — Andreas Hale 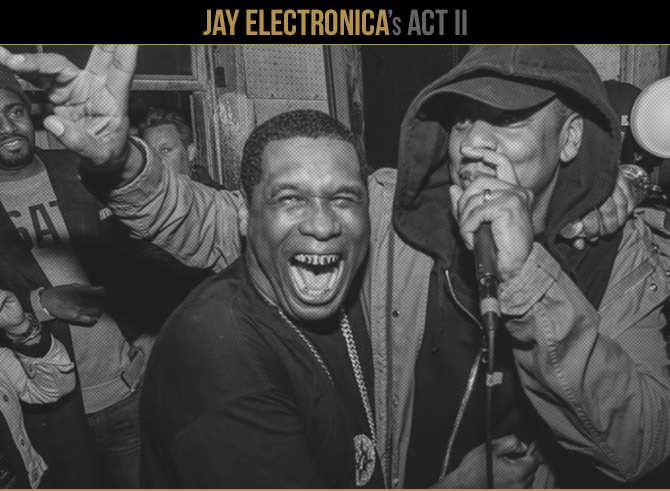 Here’s how long ago Jay Electronica has teased ACT 2…

He once announced the project’s release date on his MYSPACE page, y’all. That was a decade ago and we still haven’t seen what was supposed to be his debut album. It’s hard to believe that a decade has passed since “Exhibit C” was blowing up our speakers. Since then, a million excuses have accompanied the album’s hiatus. Everything from a fraudulent collaborative album with Nas and another fictional project with Curren$y and Mos Def as Center Edge Territory were to blame. Tracklists have popped up, everyone from Young Guru to Just Blaze have talked in length about the album and, yet, we haven’t seen a gotdamn thing. We could liken this to Dr. Dre’s Detox except that at least Dre has dropped an album. — Andreas Hale 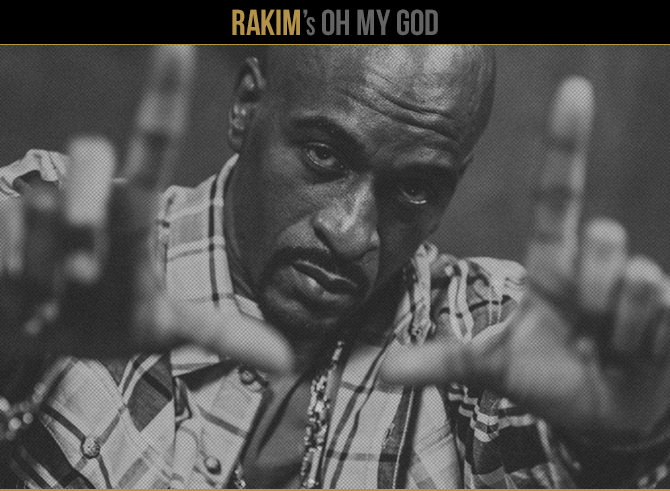 After splitting from his longtime partner Eric B. in 1993, Rakim would release his solo debut The 18th Letter in 1997. Following 1999’s The Master, Ra would sign to Dr. Dre’s Aftermath Entertainment in 2000. Quite literally, the reaction of many to this new union was “Oh my God!” (Dre would even say that those reaction actually inspired the album title, during a radio interview in 2000).

With guest appearances on Truth Hurts’ “Addictive,” and JAY Z’ “The Watcher Part 2,” the hype for Oh My God reached a fever pitch. Alas, the Aftermath Curse would hit William Michael Griffin, and he would leave Aftermath in 2003 after citing “creative differences” with Dre.— Meka Udoh 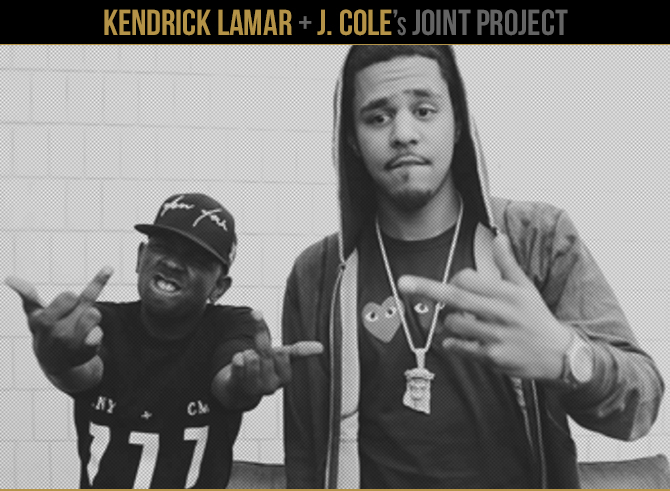 Before these two blew up as emcees making conscious albums that perform exceptionally well in the mainstream (a nod to Kendrick’s “Mask Off (Remix)” verse), Kendrick Lamar and J. Cole had been pretty open about dropping an album together as early as 2011. Success may have gotten in the way of these two spending a lot of time in the studio together. However, it’s evident when they join forces that there is some magic there. From Cole providing production for K Dot’s “HiiiPower” and “The Jig Is Up (Dump’n)” and a couple of songs leaking (“Temptation” and “Shock the World”) to their little switch off of beats with Black Friday in 2015, it appears that the project would come once things settle down. Ab-Soul and Oddisee say the project exists, but nobody has details on if or when it will drop. — Andreas Hale 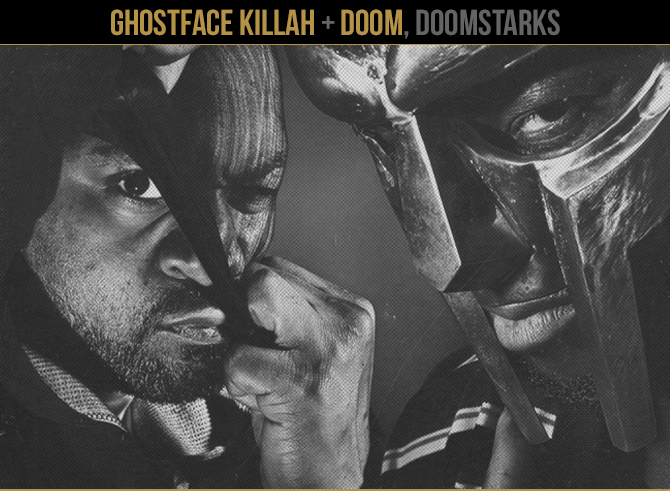 Remember that time when we got all excited for an MF DOOM and Ghostface album? Then we’d get a song, which appeared to signal that the album’s release was near, and then we got nothing. Then it would happen over and over again. It’s been over a decade since the two eccentric lyricists teased the project and we’ve been treated with a few collaborations ranging from 2005’s “The Mask” and 2009’s “Angela” to 2016’s “Lively Hood.” Still, we haven’t had a firm release date. That hasn’t stopped Ghostface from talking about it. He’ll do a random interview and tease that the release date is near but then we get absolutely nothing. — Andreas Hale 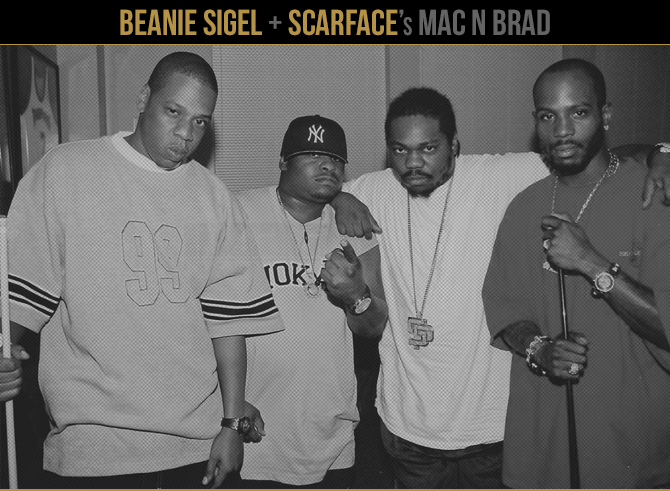 One of the more understated projects on this list could have been one of the best… you know, had it actually come out.

After the two first connected for “Mac & Brad,” off of Beanie’s debut album The Truth, the duo — along with JAY Z — would link up for some of the dopest songs of their generation: “Mom Praying,” “This Can’t Be Life,” “Some How Some Way,” and “Guess Who’s Back.” And while Jay would have a falling out with Beans (the two have since reconciled), the potential of a Scarface x Beanie Sigel project seemed all but a reality.

Years after their memorable collaborations, a Mac N Brad album still seemed like it would happen. Both ‘Face and Sigel said that there were about a dozen songs completed in 2012. “We doin’ songs, I got six, he got six,” Scarface said on an episode of RapFix Live. “It’s a process that we go through to do this album.” But, like everything on this list, it wasn’t meant to be.— Meka Udoh