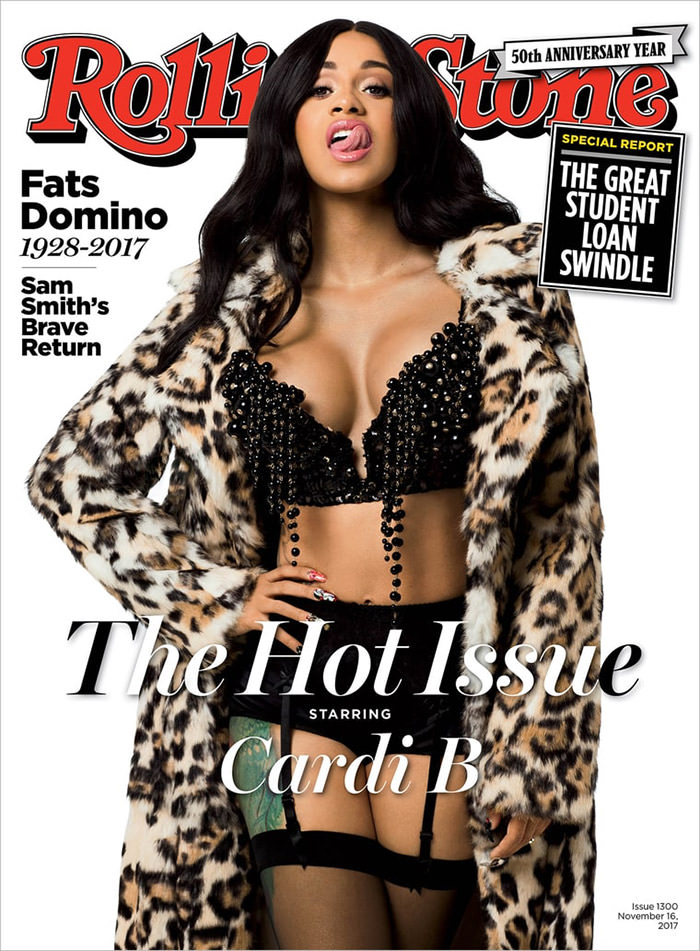 Whether you like it or not, the stripper-turnt-rapper has been hustling her way to the top and she doesn’t seem to be slowing down anytime soon.

Landing the cover of Rolling Stone’s “The Hot Issue,” Cardi sits down with Brittany Spanos to discuss her journey from stripping to owning the No.1 song in the country. She touches on the pressure of delivering after the success of “Bodak Yellow,” her upcoming debut album, her relationship with (now fiancé) Offset, and more.

Cardi B is butt-naked in the doorway of her hotel bathroom, yelling about her vagina. On a mid-October evening, she’s readying herself for a college show in Baltimore, and the toiletries provided by the hotel aren’t to her liking. “That soap gave me the yeast infection of 2017!” she hollers in her thick Bronx accent. “My pussy was burnin’ like a Mexican taco!”

It takes all of 10 seconds in Cardi B’s presence to be reminded of the sheer force and hilarity of her personality. Simply being Cardi B, at maximum volume, made her a star – first on Instagram, then on the VH1 reality show Love & Hip-Hop: New York – before she’d recorded any music at all, let alone knocked Taylor Swift from the top of the pop charts with the sly swagger of her single “Bodak Yellow.” She is the people’s diva – or “the strip-club Mariah Carey,” as she once rapped – unfiltered in a way the world often doesn’t allow female stars to be. In a culture reshaped by streaming and social media, where the kids, without much corporate nudging, get to decide who the stars are, Cardi B is what you get.

OK guys I know I keep posting about this day but I just can’t believe it.I keep replaying it in my head.I keep smiling every minute.I should have known something was up since this nigga keep telling me to go get my nails done 😂Like since when you cared about my nails 🤔😩I love you and I love how you managed to get my mom to come out and witness my engagement.Im the happiest girl in the world ❤️❤️ @offsetyrn you a true King 🤴