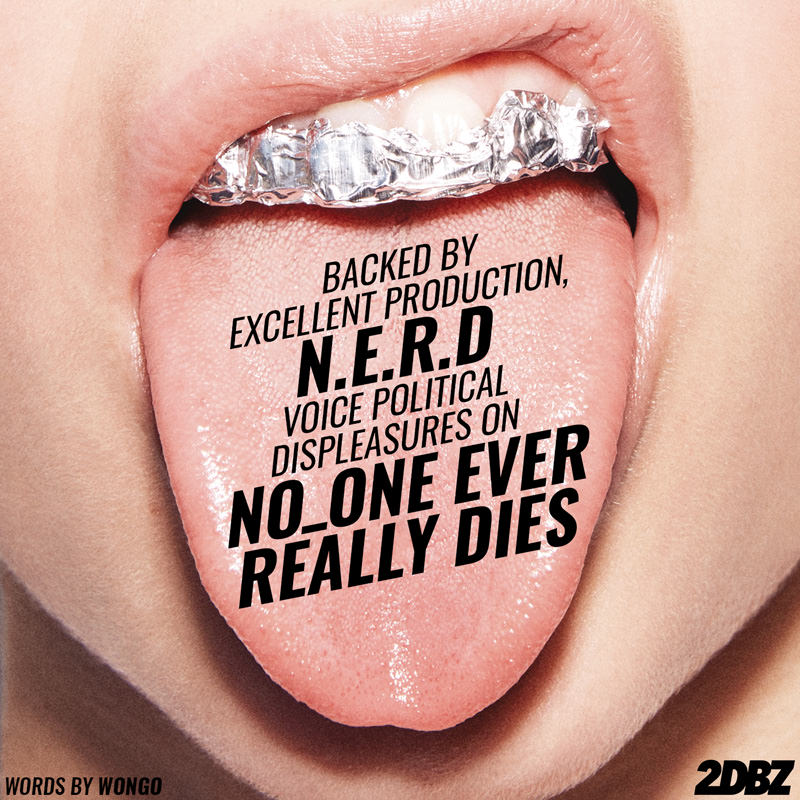 While N.E.R.D’s lead man, Pharrell Williams, has been consistently putting out music over the past few years, the band itself hadn’t dropped an album since 2010’s Nothing. All that changed this past Friday, when the trio returned with their fifth studio album, No_One Ever Really Dies.

No_One Every Really Dies runs 11 songs deep, short for albums nowadays yet, the production and content of the album are of a higher quality than most projects from this year. Rihanna, Gucci Mane, Future, Kendrick Lamar, André 3000, and others are featured and help N.E.R.D get their main points across to listeners. Of the many topics that appear on the project, the main two are social injustice and self-recognition.

Social injustice is the most prominent theme on the album. N.E.R.D shows their audience that not only are they aware of the injustices that occur in our country, they also display their anger and disappoint towards them as well. The album kicks off with lead single “Lemon” with Rihanna. On this song, Pharrell makes several political references, many towards President Trump singing, “Hate! Don’t drink the Kool-Aid, my friends/ Hate! I tried to tell y’all about this dude.” The following track “Deep Down Body Thurst,” also includes references to Trump. On “Don’t Do It!,” Pharrell and Kendrick Lamar speak on police brutality. The song details the 2016 shooting of Keith Scott, with Pharrell detailing the story in the song’s first verse. Kendrick lays an impressive verse over the chaotic beat.

The second and less notable theme that appears on the album is N.E.R.D’s promotion of self-recognition. This theme coincides with the theme of social injustice in that N.E.R.D wants people to realize that they should be more in control of what happens in their lives rather than walking around, ignorant to the society they live in. On “ESP,” Pharrell makes a reference to our extrasensory perception singing, “You got so much space, but you ain’t gonna use it/ You got a great big mind, but you ain’t gonna use it.” Pharrell relays a similar message on “Kites” with Kendrick Lamar and M.I.A singing, “N***a hold a door/ What you tryna’ to close it for?/ N***a hold a door/ There’s room for so many more.” On both tracks, Pharrell relays a desire for us as humans to be less selfish and be more open to using or basic human qualities to better the society we live in.

Aside from the content of the album, No_One Ever Really Dies features stellar production from start to finish. A notable detail on production is the beat drops on the tracks with features. These drops and changes allow the featured artist to fit in smoothly on the song despite the track being outside their typical range of sounds. This happens for Kendrick and M.I.A on “Kites” and for Future on “1000.” This slight pattern in production allows for cleaner transitions between artists and songs.

N.E.R.D returned with an album that comes close to JAY Z’s 4:44 and Joey Bada$$’ ALL-AMERIKKKAN BADA$$ in terms of content. The political message relayed throughout the album is much louder and frequent than many albums with political messages. Seven years later, N.E.R.D still display the chemistry they had from previous projects but, what’s even more impressive is the chemistry they displayed with the featured acts, some who they’ve never worked with before. These guests don’t sound awkward or forced on the songs they appear on. As a whole, N.E.R.D delivered an impressive and well put together album, but an interestingly quiet rollout may have caused the album not to reach as far as it should’ve.