What Year Is It? Ja Rule Calls 50 Cent ‘P*ssy’ During Twitter Rant It’s been 14 years since 50 Cent and Ja Rule‘s infamous beef, but that didn’t stop Ja from waking up this morning and setting Twitter on fire with a few words…

Man, what?! Ok, before you start thinking we’re back in the early 2000’s, this is real life. Apparently, Ja wasn’t too pleased with what 50 Cent had to say about him when his name got brought up on Big Boy’s Neighborhood during a promo stop for Den of Thieves (which is out today).

The reason why Ja Rule is tweeting like this is cause 50 Cent said if he saw Ja Rule he’d knock him out 😂😂 pic.twitter.com/oSopTFnLXl

Ja wasn’t done. After the initial shot, Rule York continued his rant with a series of Tweets about their past interactions and 50’s sexual preferences. 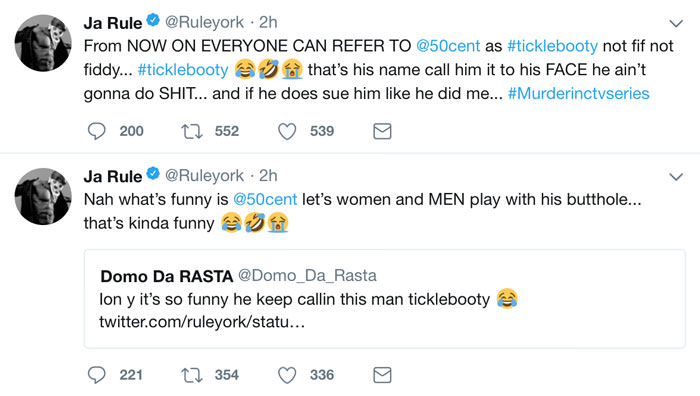 You can’t make this stuff up. And, because Twitter is the best place on Earth when it’s time to make fun of something, we were all blessed with some hilarious reactions from various users across the world.

" I just think its funny how…"

The Ja Rule and 50 Cent are beefing starter pack. pic.twitter.com/h6H80RbYiv

Me listening to Ja Rule & 50 Cent diss tracks in 2018 pic.twitter.com/dKHbHGcVtU

Oh man, what a time to be alive. Let’s revisit a few diss tracks for old times’ sake. Feel free to include your favorite songs and your own reactions in the comments.

Leven Kali Duets With Syd On “Do U Wrong”

Joey Bada$$ Drops “King To A God” Ahead Of 23rd Birthday