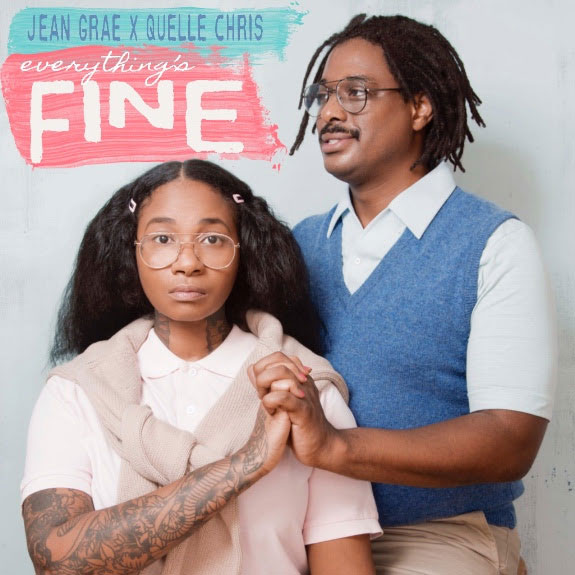 Jean Grae and Quelle Chris, two immensely lyrical talents, made news for reasons outside of music: the two longtime partners became engaged in early December. Now, the duo will release a new project together, Everything’s Fine.

“We have a dickhead for a president, and before our eyes, racial, religious, and sexual identity rights are moving backwards,” says Quelle. “Money is still a thing (I’m waiting for Star Trek life to start). There’s war, your kids may be sick, but if someone randomly asks ‘how’s it going?’ most people will say ‘fine.’”

“This album is full of our minds. Our hearts. Our love for production, and words. flow and a lot of musicality,” Jean adds. “We don’t approach topics, issues, writing, or making beats in the same way. I’m harsh, blunt, quick, technical, I arrange classically and play more than I sample. I make joints with 80 tracks. I’m layers upon layers upon layers. Quelle is patient, he’s kinder. More loose and minimalistic. He makes sounds work together that shouldn’t f**king work. How? I have no idea. These are dreams within dreams.”

The two have shared the first single from the project, “OhSh,” with words from funnyman Hannibal Buress. Listen to it below, and congrats you two!