On the eve of the smoker’s holiday, Smoke DZA, Curren$y, Dave East and Styles P have joined forces on a new song called “Inhale, Exhale”—thanks to the Compound.

The New York-based creative agency has launched a new line of weed-inspired toys, lifted from the minds of Compound curator Set Free, pop artist Ron English, and toymaker Chris Kong, founder of Made by Monsters. Dubbed the “Ganja Grin” set, the series is a play on Kong and Set Free’s first toy, the “Charlie Grin,” and comes in three versions: the HazeBob, the SilverKush, and the Pot of Gold. 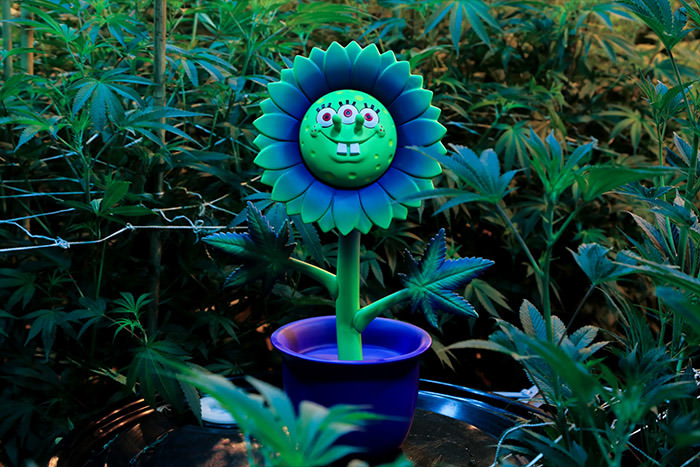 Described as a “twisted parody of Sponge Bob Square Pants,” the figure showcases a marijuana sprouted stem with colors inspired by strains of weed—namely, Purple Haze and Sour Diesel. A blacklight can also be used to reveal a third strain.

To celebrate the release, the Compound will be releasing a three-track project called Set Free Presents: Compound Smoke Project, dropping on 4/20, of course.

“There has never been a toy created to celebrate the relationship between hip hop and weed,” Set Free told The FADER, “so it was only right that I make a record to go with the product.”

The first single is a burner, literally, with Smoke DZA, Curren$y, Dave East, and Styles P teaming up on “Inhale Exhale.” Light one up and press play on the Buda & Grand and Set Free-laced cut below.