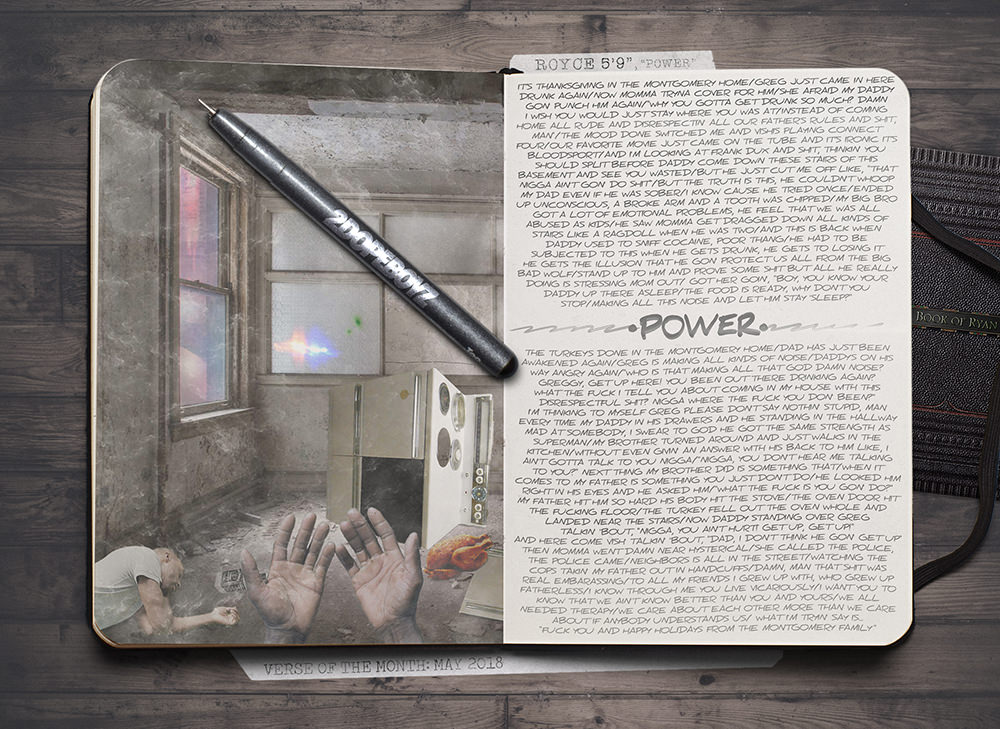 Past winners have included J. Cole, Kendrick Lamar, André 3000, and Phonte. And for May, Royce 5’9″ gets the nod for the Book of Ryan standout, “Power.”

While Pusha T nearly snatched the honors with virtually every bar he dropped – on DAYTONA or otherwise – it would be Nickel Nine who would ultimately take the Verse Of The Month crown with the latter half of “Power.”

A standout from The Book Of Ryan, the Boi-1da-produced song painted a bleak, morose and turbulent picture of the Montgomery household during the holiday season that was anything but happy. Starting off rather dark, things just get progressively dismal with each chapter. In a rather graphic detail, Royce describes how his father’s drug- and alcohol-fueled rage would set its sights on his family, particularly the Montgomery brothers. Royce and his brother, Kid Vishis, initially witness their father’s domestic abuse of their mother, before their older brother Greg – who would resort to alcohol as an escape, himself – would try to stand up for himself.

“The mood done switched, me and Vishis playing Connect Four/ Our favorite movie just came on the tube and it’s ironic it’s Bloodsport,” Royce raps while setting the scene. “And I’m looking at Frank Dux and shit, thinkin’ you should split/ Before Daddy come down these stairs of this basement and see you wasted/ But he just cut me off like, ‘That n***a ain’t gon’ do shit’/ But the truth is this, he couldn’t whoop my dad even if he was sober/ I know cause he tried once/ Ended up unconscious, a broke arm and a tooth was chipped/ My big bro got a lot of emotional problems, he feel that we was all abused as kids”

Ultimately the combination of their father’s abuse and rage would prove costly, as he would end up knocking Greg out, forcing Royce’s mother to call the police and have his pops arrested. Royce then concludes that, despite his rough upbringing and abusive patriarch, he was eventually able to turn the negative into a positive and use the struggle as POWER to move forward.

Royce’s gloomy and somber “Power” was the pinnacle of an intensely personal album in The Book Of Ryan, and proved once again that 5’9″ is one of rap’s preeminent lyricists today. It may have been Pusha’s week, but it was Nickel’s month.