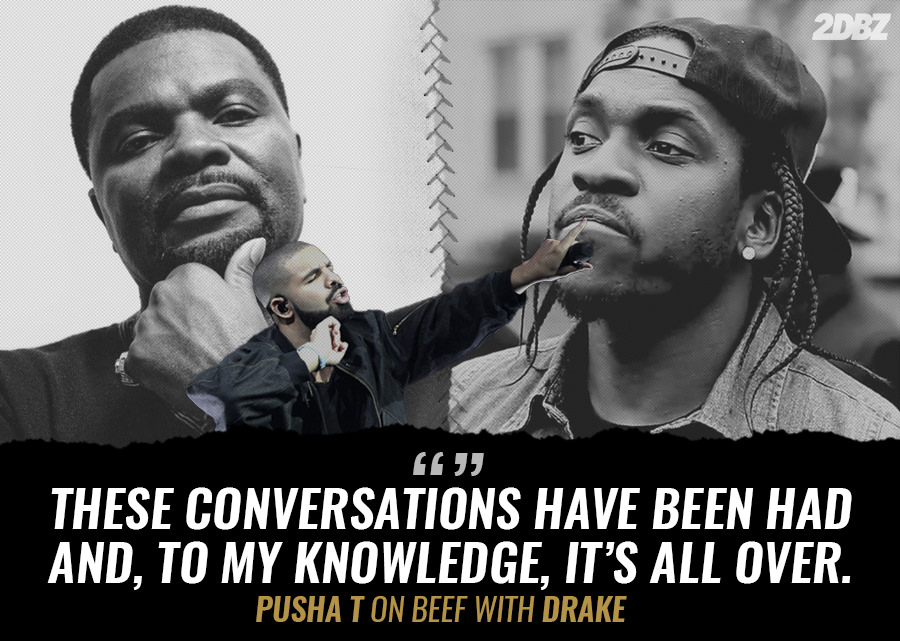 In the midst of what was becoming one of the better rap beefs in recent memory, “it’s all over with” now—thanks to some conversations that were had. Although Pusha T set the stage for numerous rounds of a “surgical summer,” it looks like he was forced to lower the scalpel.

“These conversations have been had and, to my knowledge, it’s all over,” Push revealed in a new interview with Vanity Fair. “It’s all over with.”

And it seems like you’re going to put out these albums forever. And it seems like the beef is squashed. So is it all for nothing, or what do you think we’re supposed to learn from it?
I don’t even know. I don’t know what was lost or what was gained.

You talked about having a surgical summer with him, peeling the layers back. So it seems like you’ve got more stuff in the tank.
I mean, you know. These conversations have been had and, to my knowledge, it’s all over. It’s all over with.

Do you feel good about that?
Yeah. I mean, listen: I’m ready to be back to the music for real. Just feeding my base, that’s it. That’s the most important thing to me at all times.

The conversations being referenced are those between Kanye West, Drake and Triple OG/Rap-A-Lot Records founder J Prince, who said lines were crossed on Pusha T’s “The Story of Adidon” and, after hearing Drake’s supposed “career-ending” response, felt like things were getting beyond rap and would get out of hand.

“After speaking with Kanye, I spoke with the brother, and he didn’t want this,” Prince said on Sway in the Morning. “I saw this going to a place that I feel would have ended his career if Drake would’ve put out this song that he had on him. It definitely would’ve hurt families.”

“That’s not Drake’s character to tear a man down to that extent,” he continued. “The ingredients were overwhelming. I know for a fact that it would have been bad for Kanye and my man.”