Past winners have included J. Cole, Kendrick Lamar, André 3000, and Phonte. And for June, Black Thought gets the nod (for the second time in six months) for “Twofifteen.” 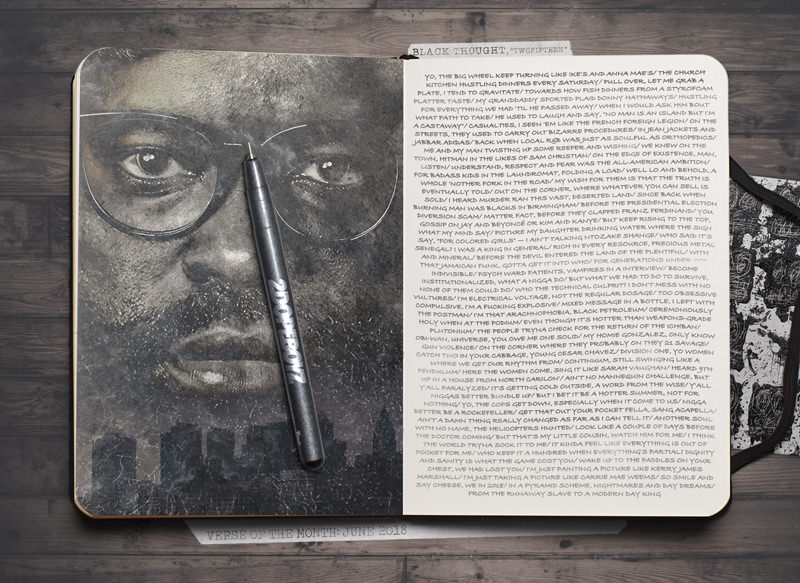 Although there was some stiff competition — like Benny (who won the fan-vote by a landslide and could’ve had his verse on “GODS Don’t Bleed” included as well) or Pusha T (who’s nuclear assault towards Drake was easily the most talked-about moment of the month and even forced The Boy to respond to his claim’s throughout an entire album) — this is Black Thought we’re talking about. And when it comes to the 9th Wonder-laced intro on Streams of Thought Vol. 1, the legendary emcee proved for the 98,124th time why he’s one of the nicest to ever do it.

Channeling the same energy from his epic, VOTM-winning Funk Flex freestyle, Thought unloaded bar after bar after bar for close to four straight minutes. A small sampling of his verbal destruction:

I’m that arachnophobia, black petroleum
Ceremoniously holy when at the podium
Even though it’s hotter than weapons-grade plutonium

Sheesh. Long story short, nobody was touching Black Thought — again — for Verse Of The Month.

On top of the seven original selections, there were another handful of verses that could’ve easily taken a spot. So we wanted to take some time out to shout J.I.D for his XXL Freshman freestyle, Tsu Surf for bodying his time on Bars on I-95, IDK for his faux XXL Freshman freestyle, Locksmith on “Advice To My Younger Self,” DOOM on YOTA’s “Drop the Bomb,” and Solemn Brigham. There’s even more, too. It was an insane month.