This is not a shot, in the slightest.

But. It is a criticism.

In this writer’s opinion, Future‘s musical output in 2018 didn’t pack the same “oomph” as it did in years past. While 2017’s FUTURE and HNDRXX topped the charts, and made the rapper the first-ever artist to release two Billboard 200 chart-topping albums in consecutive weeks, BEAST MODE 2 and WRLD on Drugs didn’t have the same impact.

But to be fair, according to Future, it was all by design.

“In 2018 I just didn’t want to do anything,” Future revealed to Zane Lowe in a new interview. “They just wanted me to do things, but I would just… I did a lot. Five years I was on the road. I didn’t ever get a chance to go home. I’ve been on four or five tours all across the world, from European tour to Australia tour, to just doing it two, three times back to back. Soon as I get off a tour I got to go on another tour in two weeks, go on another tour.”

Aiming to return to the top with his forthcoming seventh album, The WIZRD, Future has released an accompanying documentary a week before it’s January 18th release.

An hour-long visual, director Marcus A. Clarke‘s cameras followed the rapper over the course of three years — from his 2016 Purple Reign Tour to his recent studio forays — capturing everything in between. Meanwhile, there are cameos from the likes of Young Thug, Drake, Metro Boomin, Yo Gotti, DJ Khaled and even André 3000.

The documentary is now available on Apple Music.

UPDATE (1/14): With The WIZRD album impacting on Friday, Future has unveiled the tracklist with Young Thug, Gunna and Travis Scott showing up throughout the 20 songs. 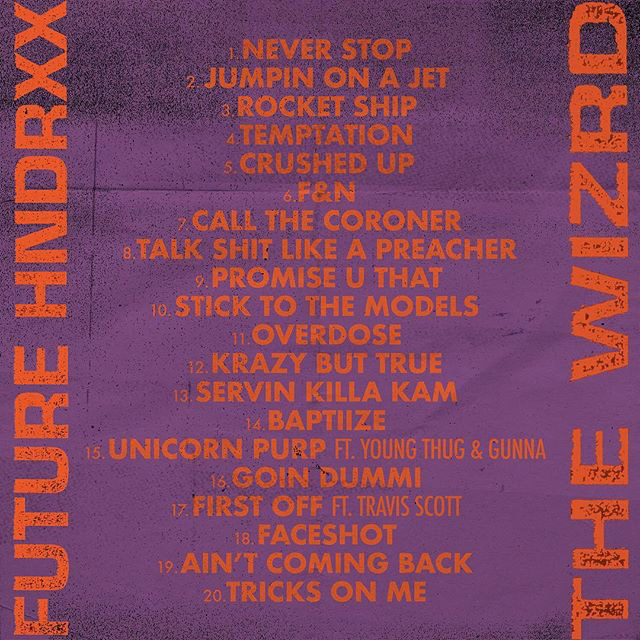