Our Favorite Rap Albums of the Year [2019 in Review] 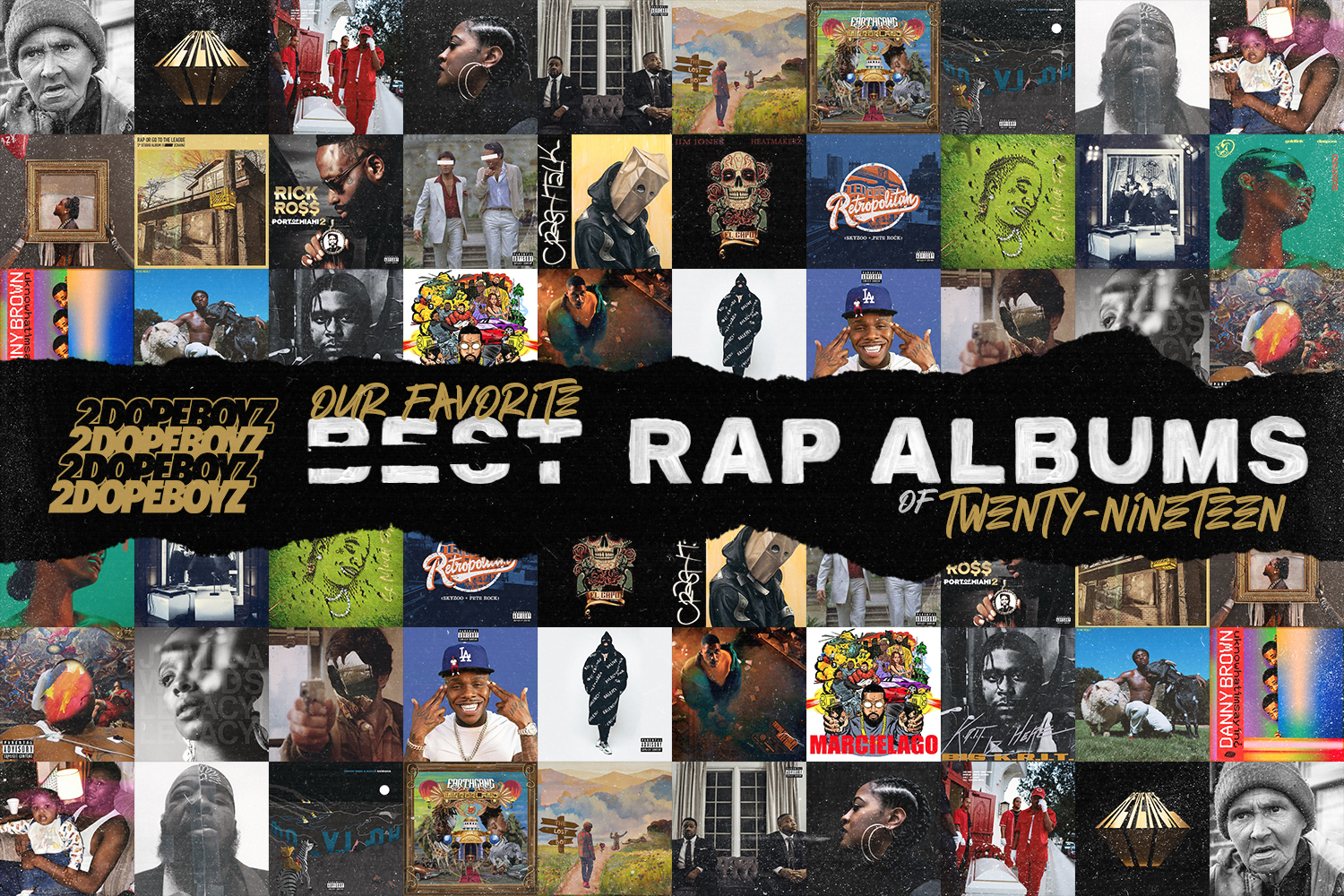 A yearly tradition, the DopeHouse is proud to offer our visitors an annual list of our favorite hip hop albums of 2019. Again, like we point out every single time, this is not a list of which albums we thought were the best releases of the year; this is a compilation of albums the three people of the site (each with a wide array of tastes) happened to all like as a collective.

I (Meka) may have listened and enjoyed that album, but Shake and Wongo: not so much. And, vice versa. So, there’s that.

“You didn’t include ___, so this list, as well as your ability to have individual thoughts, is invalid.”

“I have a better top list than this BS.”

That’s cool. Throw it in the c-section below and let everyone else dissect it. At the end of the day, that’s the real goal of these types of posts–putting the spotlight on projects that deserve attention from the masses.

We good? Good. Get into it below. 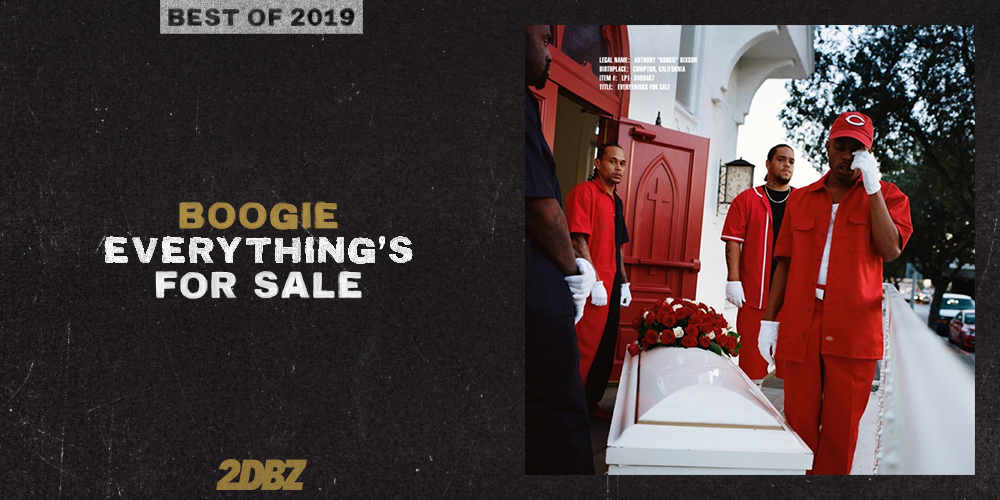 2019 began with what would eventually be one of the year’s strongest projects from one of hip hop’s most underrated acts. After years of solidifying his spot thanks to projects like The Reach and Thirst 48 II, Boogie stepped into the spotlight with his major label debut, Everything’s for Sale. Tackling love and its accompanying ups and downs, especially in today’s social media and “left on read” era, Boogie navigates it with anything but perfection. From the acceptance of his self-sabotaging on “Self Destruction,” to the hesitation and uneasiness that comes with entering a new relationship that we see on “Live 95,” authenticity and emotion serve as his guiding light. – Wongo 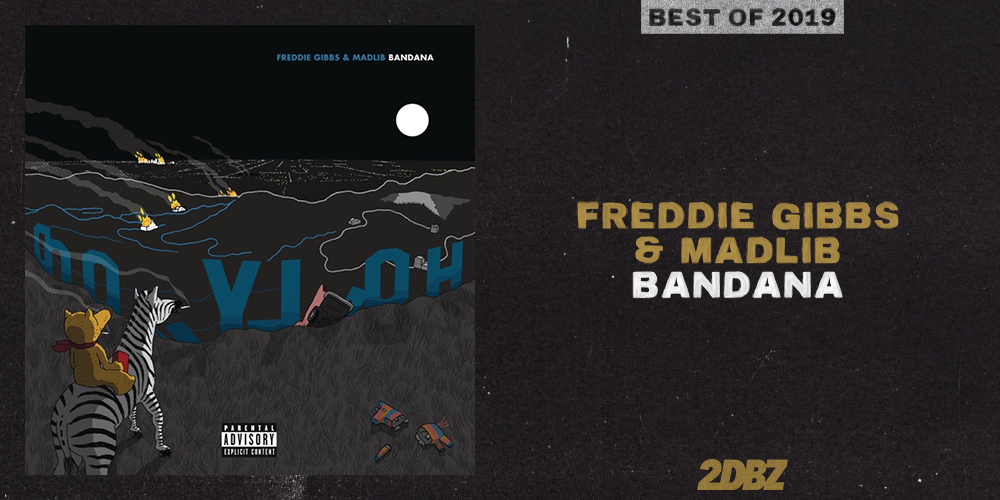 I am a grown man, with several concurrent careers within this music industry. At all of these said careers, I am around a lot of de-melanated people more often than not. So, you can imagine how I look like at times working on projects with crack rap — my favorite kind of rap — pumping out of my headphones on a random Tuesday afternoon.

Freddie Gibbs and Madlib provided the soundtrack for our Spring of 2019 with Bandana, their anticipated re-up to 2014’s Piñata. With Otis behind the boards and Frederick behind the mic, the pair crafted one of the most solid hip hop albums of the year. With top-notch contributions from Pusha T (“Palmolive,” man…), Anderson .Paak, Black Thought and others, then pairing those street tales with off-the-rails videos for “Gat Damn,” “Half Manne, Half Cocaine,” “Giannis,” and “Crime Pays,” Bandana can arguably be considered one of the best projects of both Freddie Gibbs’ and Madlib’s careers. – Meka 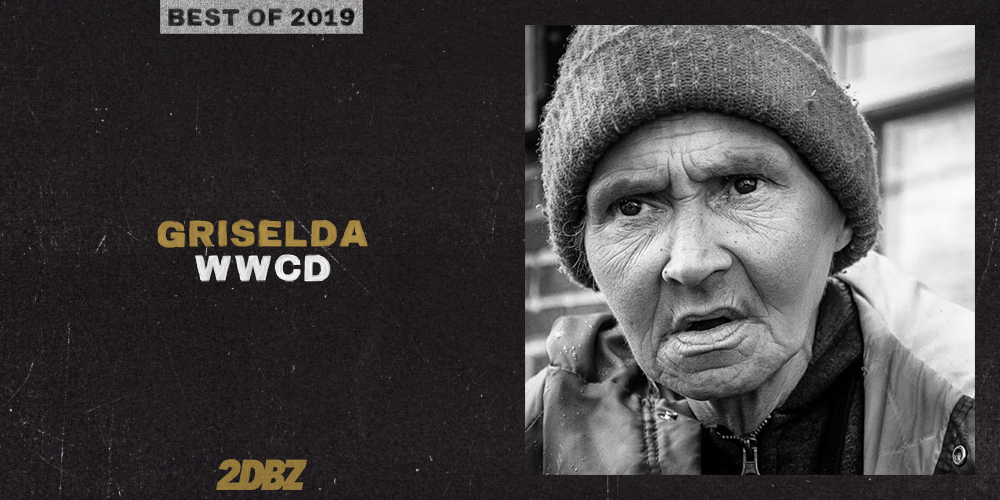 What Freddie Gibbs and Madlib kicked off this summer, those Griselda boys helped finish. After supplying the streets with a nonstop supply of quickstrikes, EPs and mixtapes for the past several seasons, Benny The Butcher, Conway The Machine and Westside Gunn finally delivered their major label debut, WWCD. Keeping things sample-free and in-house, the pair of Daringer and Beat Butcha provided a plethora of dank, dark and lovely soundscapes for the trio to wax drug poetics over (Benny’s “5’8 but 6’11 if I stand on my bricks” line on “Moselle” gets me every single time). While the album could easily do without the out of place Eminem feature, it’s a minor blip on what is a culmination of years of grit and grind from the Buffalo Kids. Who knew that the best music to currently come out of New York would come from some guys who live a stone’s throw away from Niagara Falls? – Meka 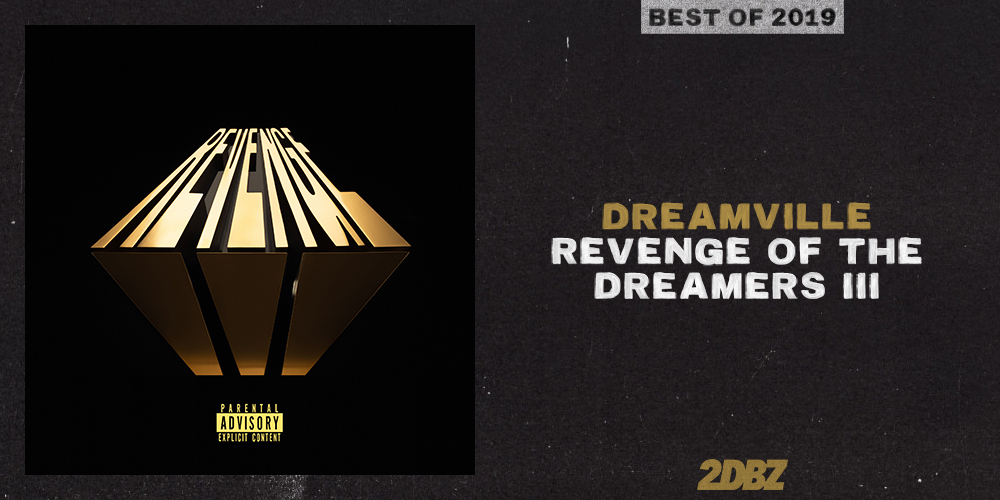 Just weeks after the calendar flipped to 2019, social media would be swarmed by golden tickets as if Charlie and his Chocolate Factory squad had returned to the scene. Courtesy of Dreamville, the mass total of ticket handouts – over 300 in total – would be the start of one of hip hop’s most collaborative projects ever. For the next six months fans waited rather impatiently to hear whatever took place behind the closed doors over the ten-day session. What arrived would be an eighteen-track solidification of the label’s acts as well as a formal introduction to some of mainstream’s most underrated and somewhat unknown – Buddy, DaBaby, Mez, Young Nudy, REASON and more. If there was an album that represented being the “middle child,” this would be it. – Wongo 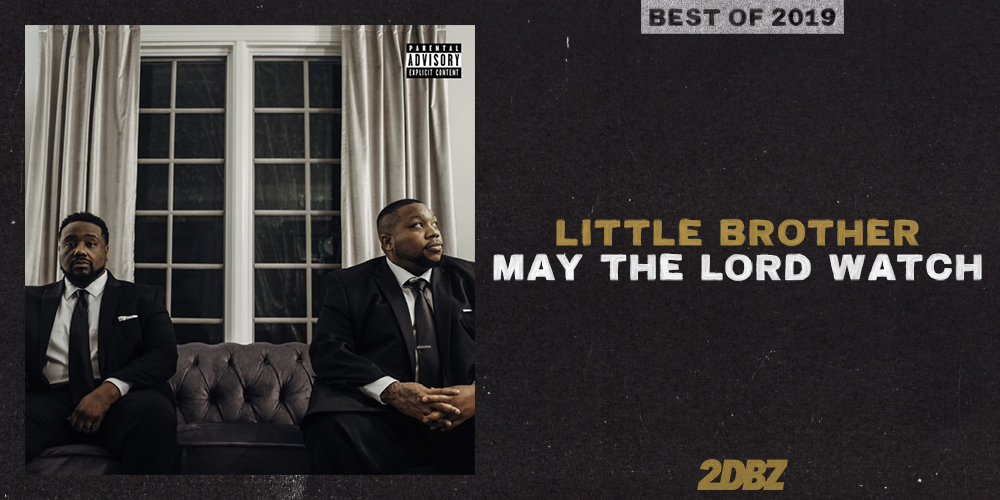 When Little Brother split up in 2010, it felt like a death knell for my twenties. The group was a major part of my Aughts soundtrack, and while they would each release solo efforts (Phonte would even earn a Grammy nod for his work as a member of The Foreign Exchange), something felt missing.

That something came back in full force with May The Lord Watch, Little Brother’s first album in close to a decade. And rather than picking up where they left off all those years ago, they grew along with their fans: no longer the young Okayplayerian indie darlings, Tigallo and Rapper Big Pooh were now grizzled veterans and the album is a testament to aging gracefully (and, at times, not-so-gracefully). Their fictional channel, UBN, is now ran by former “intern” Peter Rosenberg (there’s “a tall Israeli is running this rap sh*t” joke in there), the beloved Percy Miracles has passed away, and Phonte prefers to watch Flip Or Flop over going to the club. The album is an ode to growing older, and — despite what rap’s “young man” climate may suggest — there is nothing wrong with that. – Meka 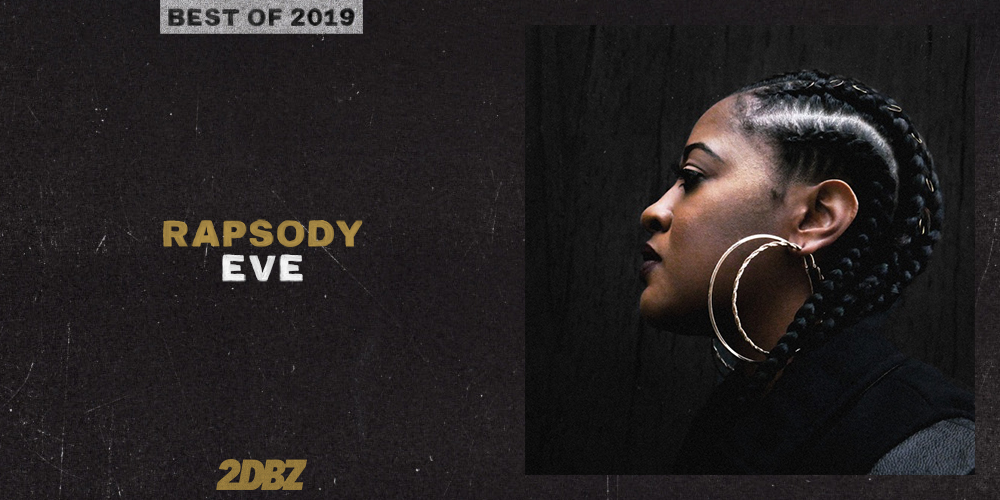 While the song titles served as tributes to Black history’s most powerful women (“OPRAH,” “NINA,” “IBTIHAJ“), Rapsody’s EVE album itself dealt with the burdens of simply existing as a Black person on this planet, from the psychological effects on the societal violence Black men endure (“MYRLIE”) and create (“AFENI”), to the roots of sexism that Black women face (“CLEO”). EVE is Black Girl Magic in audio form: who else do you know can get contributions from both the notoriously reclusive D’Angelo and Queen Latifah on their album? – Meka 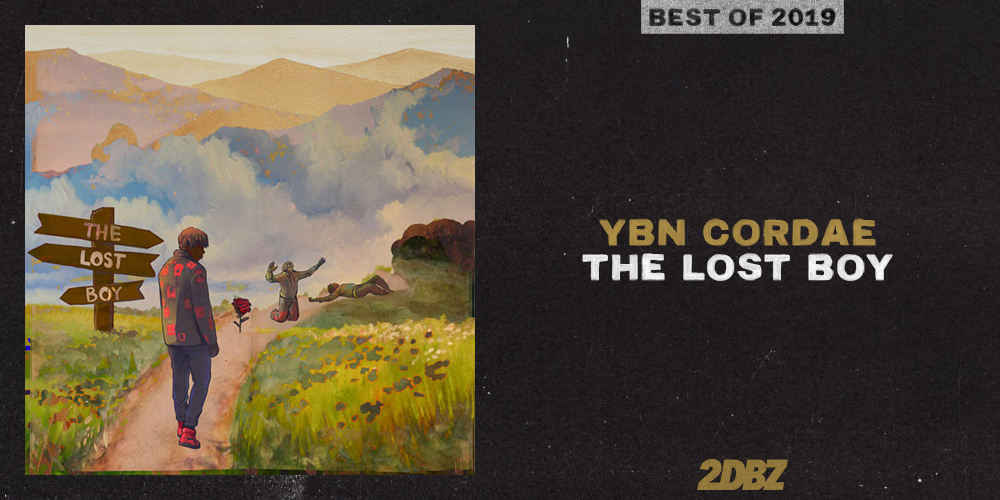 In the midst of hip hop’s trap wave came YBN Cordae, a sign that hip hop’s “true form” was still alive and well. Propelled thanks to his remixes of Eminem and J. Cole tracks, Cordae would soon find himself in a comfortable position. His plight would continue thanks to his debut album, The Lost Boy. Across its fifteen tracks, Cordae would detail past struggles with life’s unknown territories with the maturity and wisdom he gained through those experiences. This all includes the realization of the importance of “home” on “Way Back to Home” and family despite their issues on “Family Matters” as well as the optimism of a brighter future on “We Gon Make It.” All this with help from some of hip hop’s most respected. – Wongo 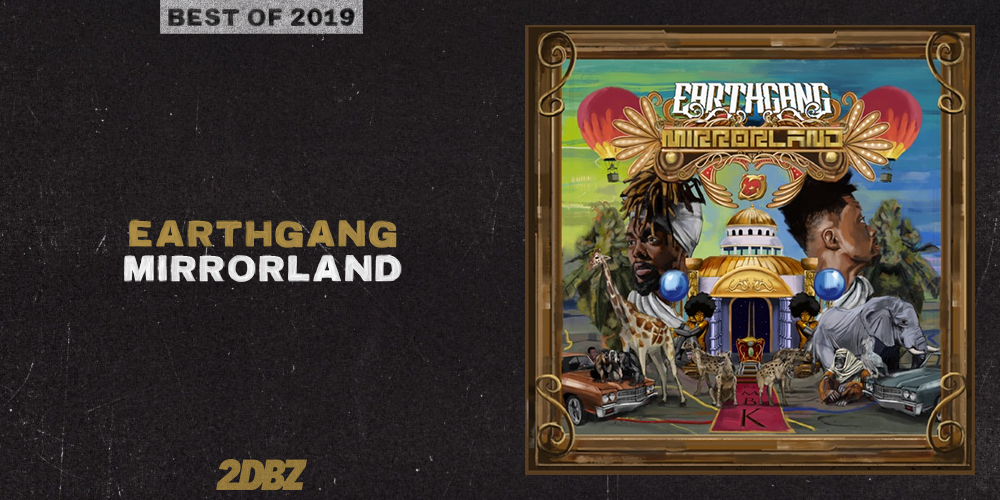 Let’s get this out of the way first: to call EarthGang “OutKast with two André 3000s” – contrary to the opinion of one culture-appropriating colonizer – is an insult to OutKast, 3 Stacks, Big Boi and EarthGang. To dismiss the amount of work that WowGr8 and Olu have put in over the years is a slap in their faces, and is just a really, really stupid take.

While Bas, Ari Lennox, J.I.D and Lute are high-quality talents in their own respective rights, EarthGang are easily the most unique members of J. Cole‘s Dreamville stable. That type of quality shined all throughout the duo’s wide-ranging formal debut album MIRRORLAND.

Be it the skittishly frenetic bounce of “UP,” the glorious “Proud Of You” with Young Thug, the paranoia-inducing haunt of “Swivel,” or the everyman hustle of “Blue Moon” (this writer’s personal favorite song), EarthGang provided one of the best projects from a crew that’s already stacked with top-notch talent; that’s no easy task. – Meka 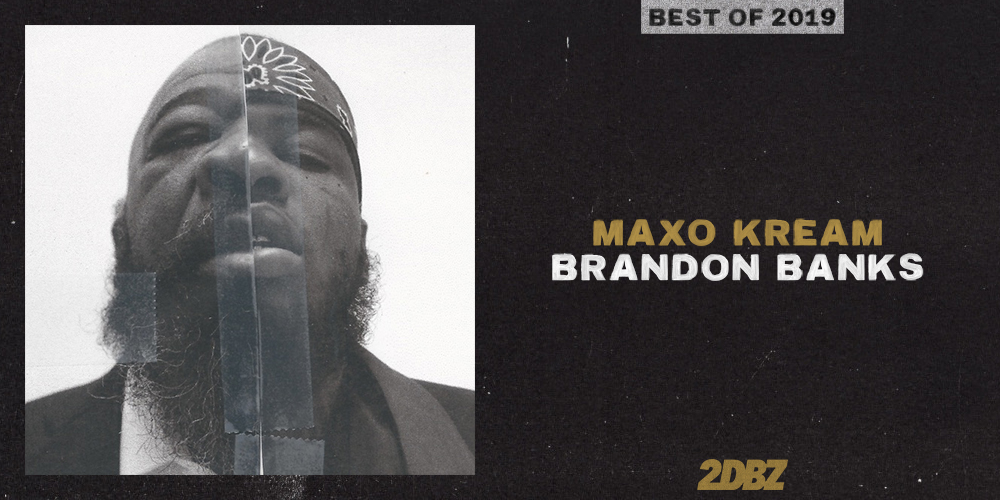 I love my crack rap as much as the next person (see: Griselda, Bandana), but musical auteurs know that every thrill-inducing yin is always accompanied by an equally morbid yang. Maxo Kream strikes that delicate balance throughout his sophomore album, Brandon Banks.

While the album sprinkles light-hearted offerings throughout (“She Live” with Megan Thee Stallion), the album is a generally a dark (“3AM“), gloomy (“Brenda”) and claustrophobic affair (“Meet Again”). Brandon Banks–named after Maxo’s own father who, well, was a Nigerian scammer in his own right–is a sobering reminder of what lies on the other side of that wide world of snort. – Meka

By far one of 2019’s best offerings was the star that is DaBaby. Before any music, the Charlotte-bred act started gaining notoriety thanks to his unwillingness to back down from city “officers” during a music video shoot for “21” in 2018. With his debut album Baby On Baby dropping in March, DaBaby found himself further entrenched in the mainstream thanks to the platinum single, “Suge,” a song that would be nominated for Best Rap Song and Best Rap Performance at the upcoming 62nd Grammy Awards. Months later, led by a desire to perform new music on tour, DaBaby would release his sophomore album, KIRK. Both albums portrayed his crisp lyricism glazed with a comedic personality that helped him become one of hip hop’s most promising acts. – Wongo

On top of our Top 10, below you can find another round of releases we all respectively rocked with throughout the year. And on a more selective note, all three of us will be sharing our personal favorites later this week.

UPDATE: Personal lists are up! Shake, Meka, and Wongo.