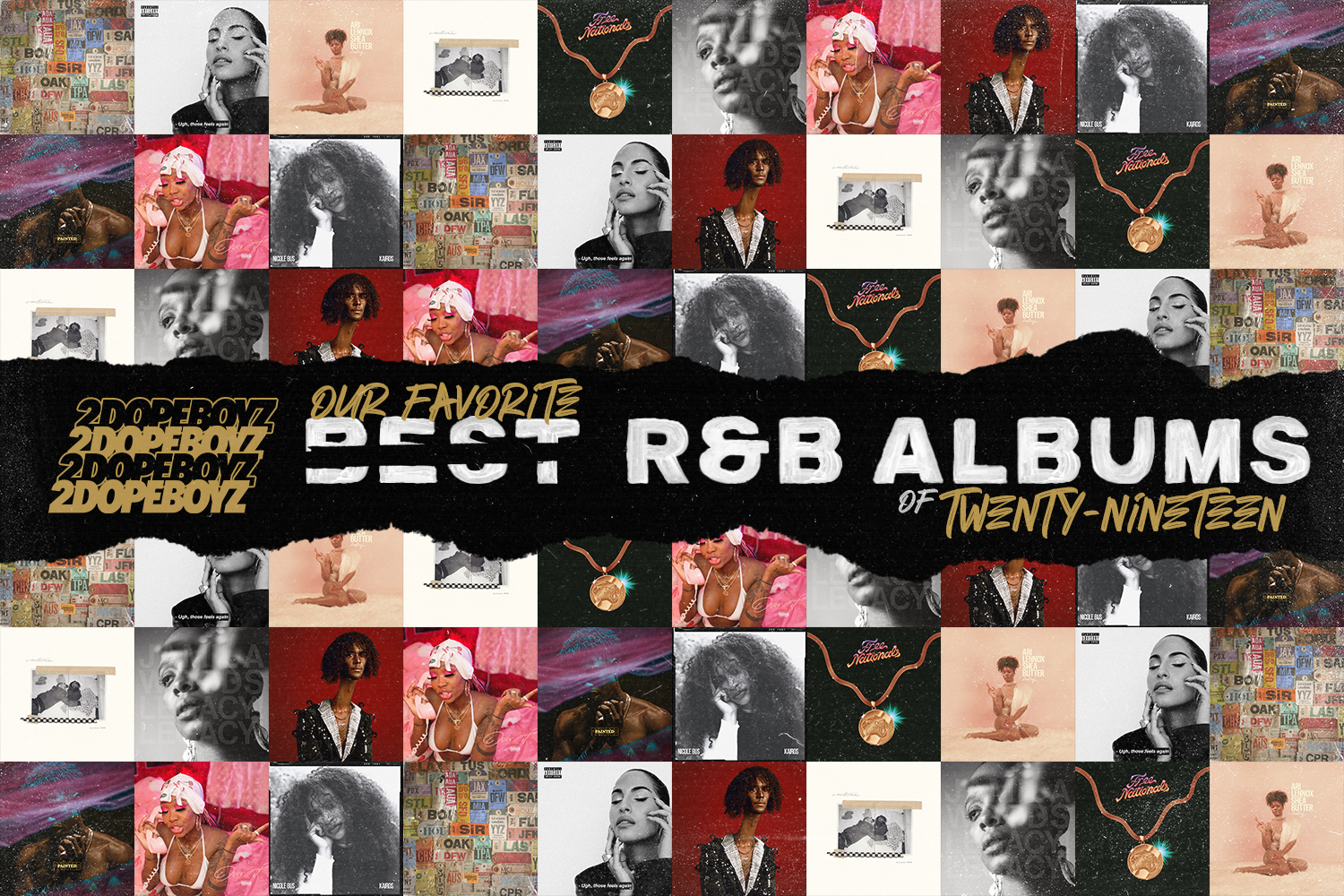 Alongside the many rap albums we kept in rotation throughout 2019, the year was also full of incredible R&B albums to balance things out.

Today, as continue to review the past 365 days, we’ve compiled a list of our favorite bodies of work. You know the deal: read what we have to say, co-sign or trash it, and feel free to provide your own lists. The whole reason for these year-end posts is to help highlight quality music. 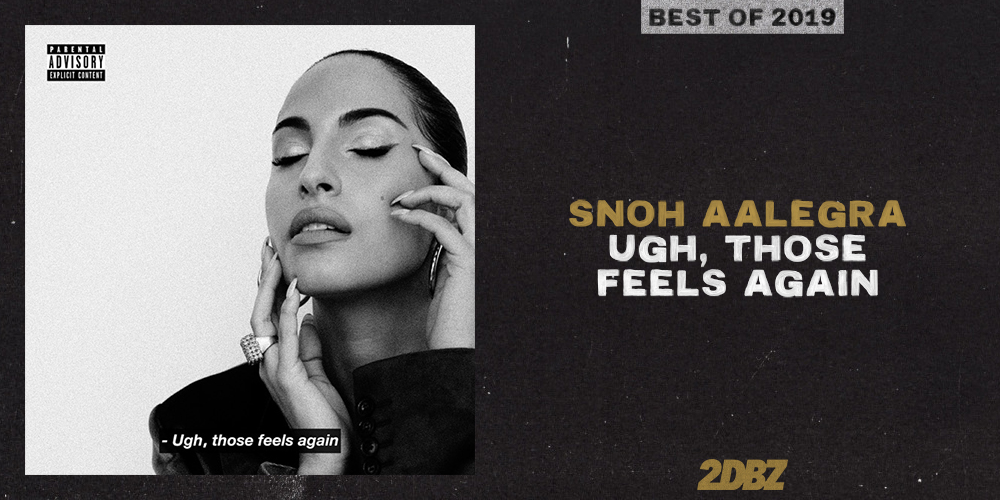 I’ll be honest: It’s been a long time since I enjoyed an R&B album as much as I did Snoh’s sophomore effort, – Ugh, those feels again. The four-song pocket she hits with “I Want You Around,” “Situationship,” “Whoa” and “Find Someone Like You” is perhaps my favorite album moment of the year, and that’s just the project’s first four songs (excluding the intro). Minor late-year social media kerfuffle aside, Snoh went independent and released an album better than most R&B projects with full-blown major-label budgets. You’ll definitely see me at one of her shows in 2020… and, Lord willing, hopefully she will too. – Meka 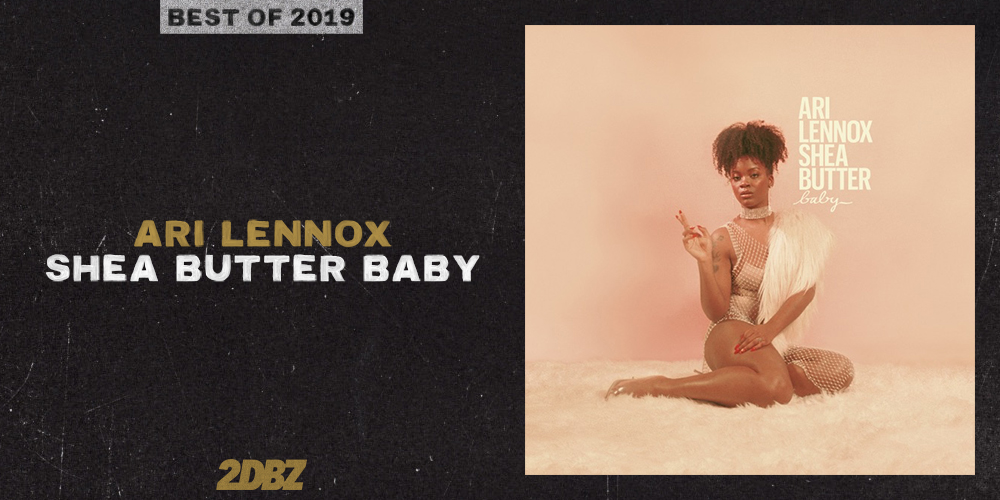 For as long as I’ve been with the DopeHouse, there’s always been an R&B songstress who highlighted the year with an impressive project. First it was SZA in 2017 with CTRL. Then came Teyana Taylor in 2018 with KTSE. And finally now, it’s Ari Lennox with Shea Butter Baby. Twelve songs deep, the lady of Dreamville unapologetically presents herself and all her gleaming melanin. From romantic desires (“BMO,” “Pop”) to the lows of her romantic endeavors (“Speak to Me,” “Whipped Cream“) to celebrating her newfound independence (“New Apartment”), her emotions are portrayed which such realness and vividness–all while honing in on her true blackness and all that comes with it. – Wongo 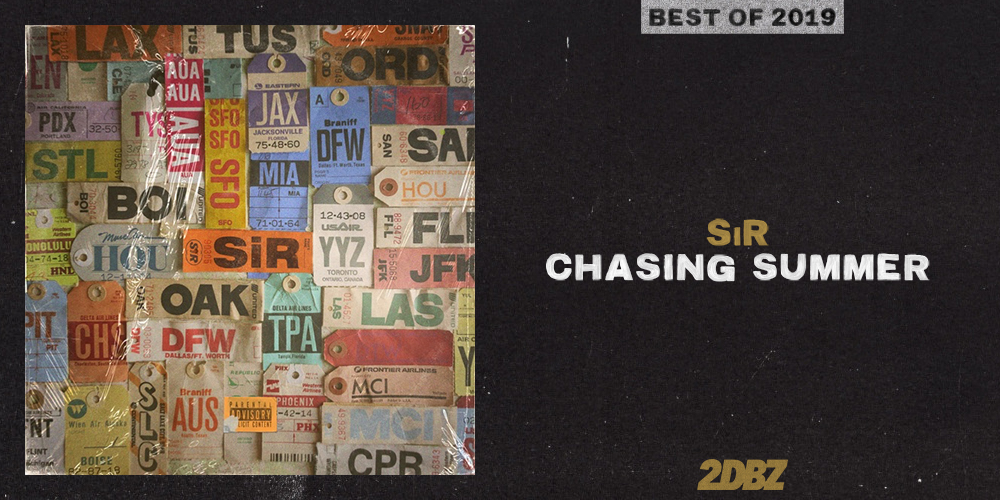 SiR has a knack for capturing a love story without forgetting to account for the season it took place in – just look at the brisk winter love we hear about on November. His sophomore effort, Chasing Summer, uses the summer aesthetic to paint his latest love story. The many tales that are presented on the album are wrapped in SiR’s desire to live a life only dictated by himself. It’s why we see him praise his lover for not suggesting a more exclusive relationship on “That’s Why I Love You” or why, despite her near-perfection, he takes command and cuts ties with the potential love on “You Can’t Save Me,” citing his unpreparedness as the reason. Summer is the muse for freedom, but he still manages to let his “Hair Down” in the sweltering heat to sustain it. A top-three R&B project (No. 1 for me) of 2019, I should also mention how it extended TDE’s long-running dominance. – Wongo 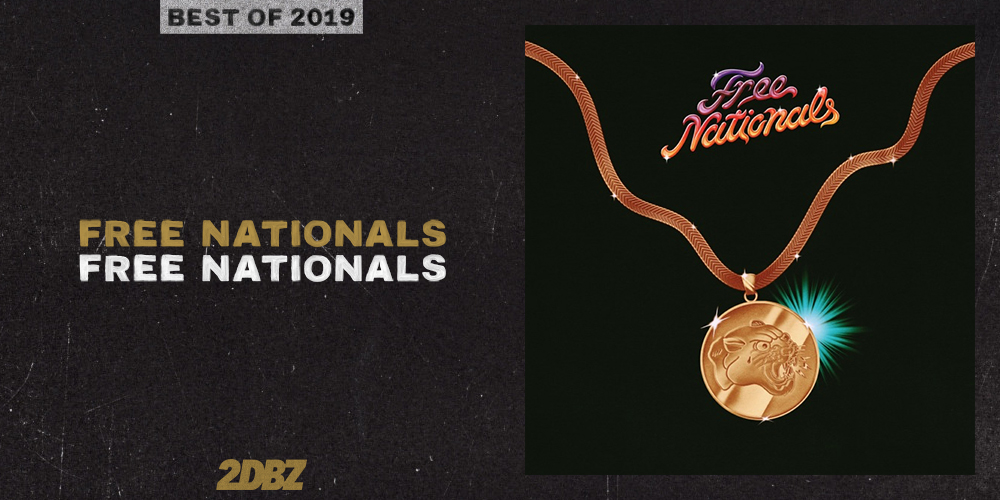 From their work with Anderson .Paak to now, there’s just always been a high and nearly-unflawed quality with everything Free Nationals touches. Painting love as one of life’s finer things, their self-titled debut presents a number of metaphorical love stories. Whether it’s newfound independence after a relationship has ended (“Apartment”) or the desire for a memorable evening with that special someone (“Shibuya”) or simply reminiscing on a former love before the fame (“The Rivington”), Free Nats detail everything with a gleaming touch–similar to that of the jewelry that dangles on the artwork. – Wongo 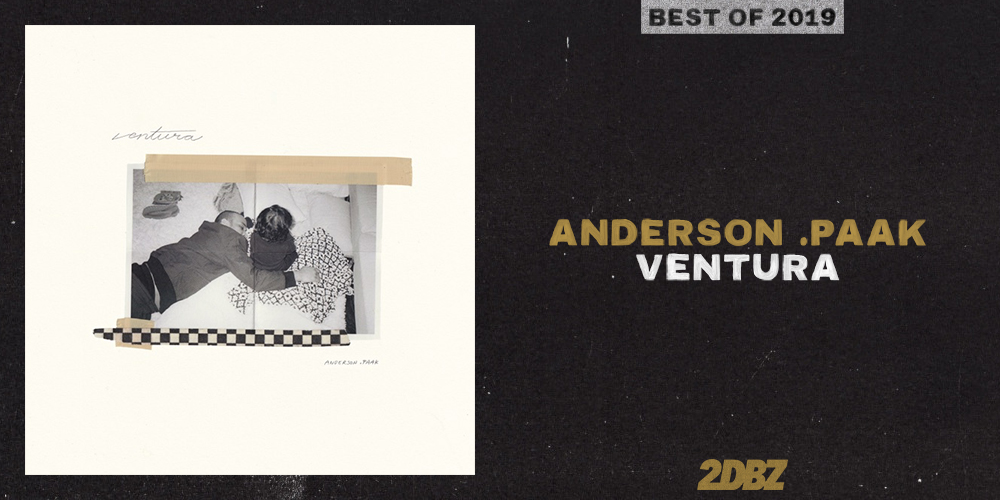 Ventura was the perfect album to allow us to forgive Anderson .Paak for all the wrongdoing on his previous effort, Oxnard. A mere six months removed from the Dr. Dre-assisted release, .Paak retracted back to old ways with Ventura and man I couldn’t be happier. The upbeat groove of “Jet Black” garnered wild amounts of plays from me and I – along with the rest of the world – were left to give an emphatic applause once André 3000’s verse on “Come Home” came to a close. As .Paak continues to move up the west coast with each project, one thought remains clear: it’s his journey and it’s best when he remains in control of the ship. – Wongo 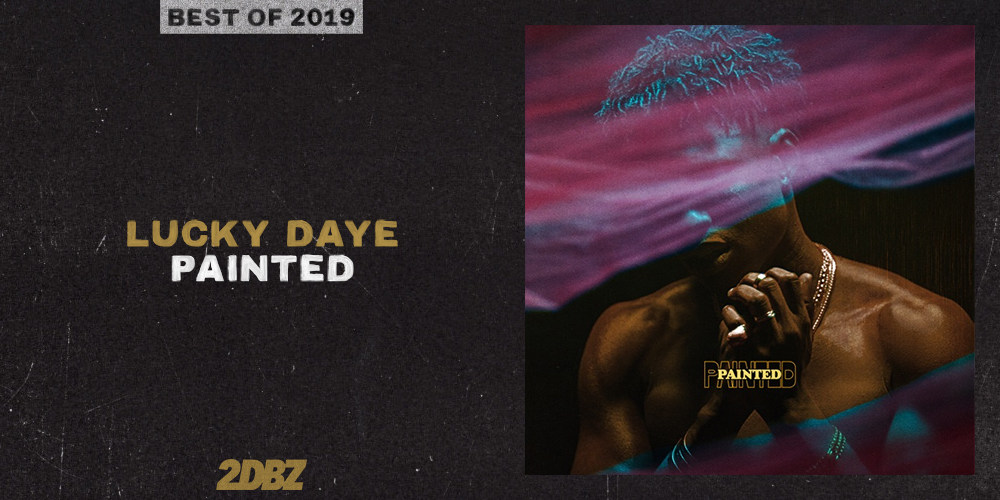 Little did we know that Lucky Daye would go from practically unknown to newfound R&B prince in less than a year’s time. Drawing comparisons to Frank Ocean and others of that ilk, it’s only fair we look at him for the New Orleans-bred star he’s become. Under the watchful eye of Tunji Balogun and the good folks at Keep Cool Records, Lucky would release three projects in the span of a year, with the last being his Painted debut–which rightfully earned him four Grammy nominations. From heart-felt ballads like “Misunderstood,” “Floods” and “Love You Too Much” to the two-step funk of “Late Night” and “Karma,” Lucky slickly entraps listeners in his sound. Artists come and go, but luckily for us all, Lucky is here to stay. – Wongo 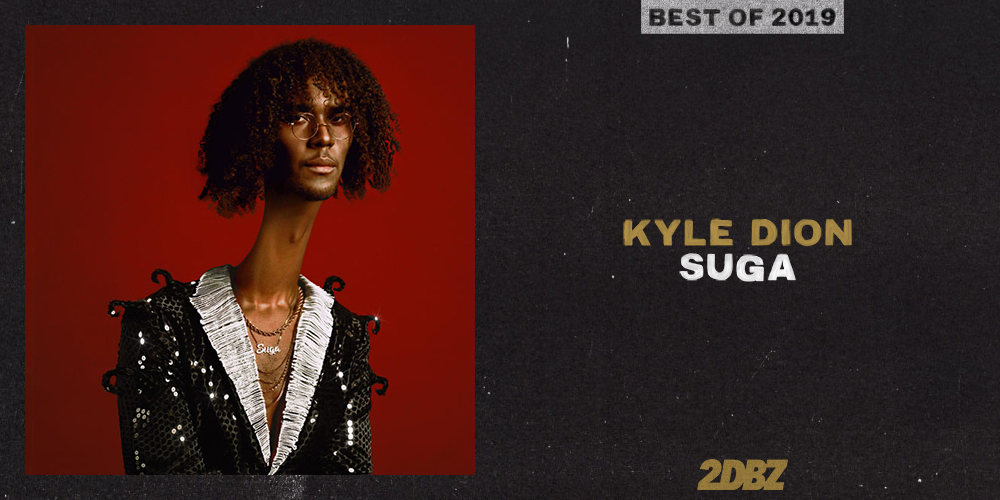 Making his presence known in 2019, Kyle Dion dropped off one of the year’s best albums just months into the new year. Suga saw Dion bringing two fields together as one. Hitting soulful notes with rockstar vigor, he relayed passionate tales across the album’s thirteen songs. As a result of battling love and the off-kilter battle with euphoria, Dion created an amazing body of works to depict the battle. The three-song string of “Glass House,” “69 Camaro” and “Teach Me” is by far the highlight of the album and don’t even get me started with the beauty of a closer that “Somethings We Can’t Do” is. Now THAT’S how you end an album. While coming up empty-handed on his quest to truly learn how to love, Kyle Dion created his most impressive body of work in the process. Which is a win in our books. – Wongo 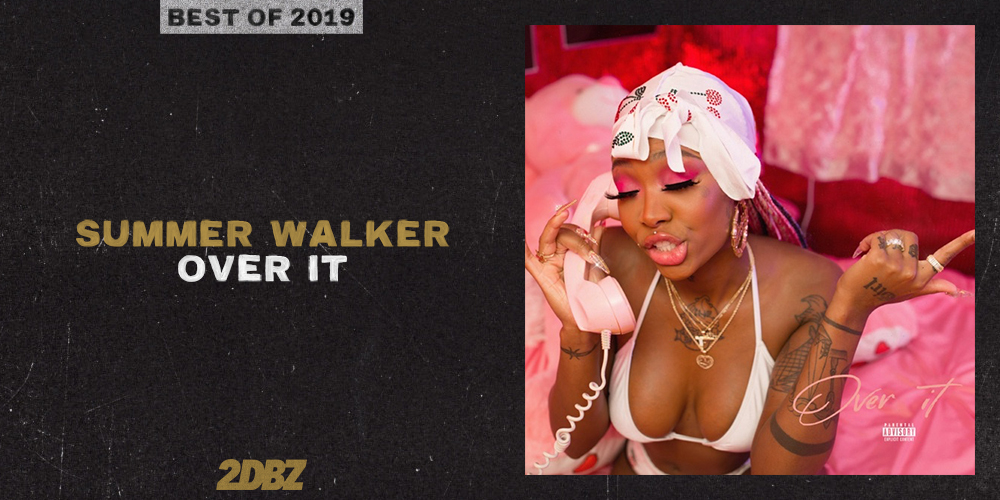 Whether authentic or not, we as art consumers are often infatuated with the depiction of one’s reality. It’s one of the reasons Summer Walker’s debut album, Over It, was received so well. Whether it’s an up or down moment, Summer seemed to never hold back when it came to laying it on wax. Consider the impulsiveness of “Just Might” or the blazing fire of love on “Nobody Else,” there aren’t many layers left to peel back after the album comes to a close. Summer is the girl who comes home everyday to sit in her room to dwell on the experience, whether good or bad, love presented to her on a given day. Staring at her ceiling in thought, she lets listeners hear these immediate thoughts, the thoughts of being over it all. – Wongo 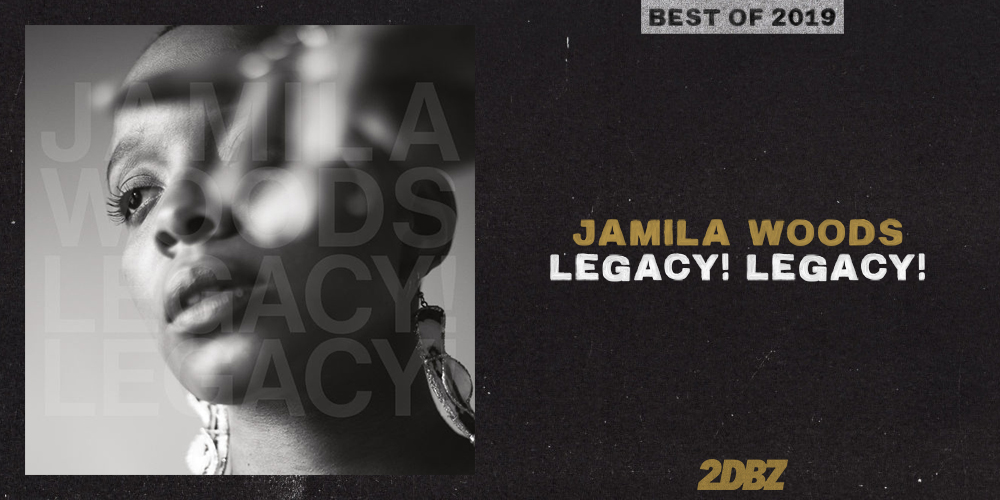 As history’s most empowering women were honored on Rapsody’s EVE album, Jamila Woods would do the same with LEGACY! LEGACY! In its entirety, the thirteen-track effort received nothing short of a standing ovation from its audience. For good reason, too. Contributions from the likes of Saba, theMIND, Nitty Scott, Nico Segal and Jasminfire helped propel the album to a high level. Not only was Jamila’s aim to honor these women, but she also hoped to delve into their minds to correctly portray their past achievements. Each song is viewed as a self-portrait rather than biographic, and it’s this very approach – one that paid close attention to their work and their words – that allowed Jamila’s sophomore effort to be the well-crafted project its been heralded as. – Wongo 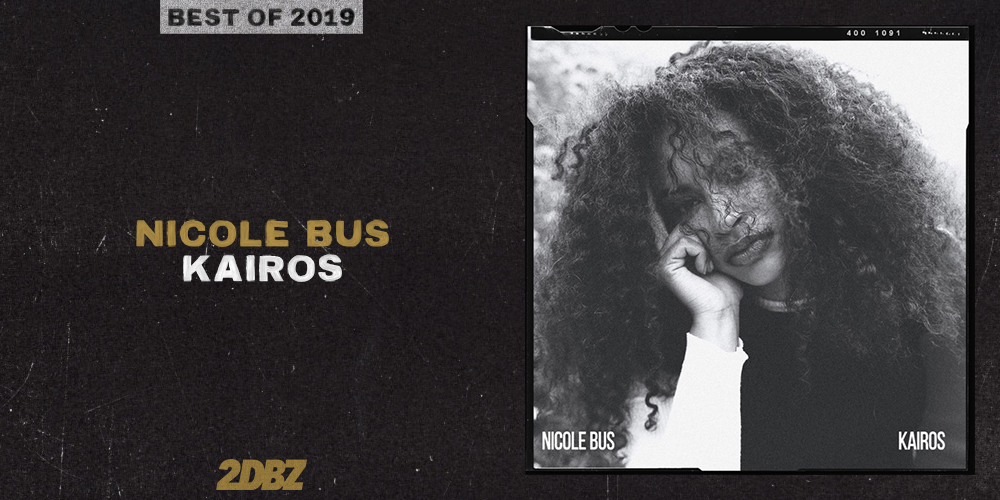 On the absolute lowest of keys, Roc Nation’s Nicole Bus delivered one of 2019’s strongest R&B albums with her stateside debut Kairos. After having the fastest debut single to top the Billboard Adult R&B Songs chart with “You,” the Dutch-reared songstress took inspiration from a throwback-era R&B sound made popular by artists like Mary J Blige, and crafted an album that was as refreshing as ever.

With the “C.R.E.A.M.”-leaning lead single “You” (as well as its Ghostface Killah-accompanying remix) as a sign, the majority of the album was so entrenched in the 90s that there should have been a bundle package for it containing a Baby Phat jumpsuit (and not those new, boof Forever 21 versions) and tickets to a Shemar Moore-hosted episode of Soul Train. “With You” has the same Donald Byrd sample that Black Moon perfected on “Buck ‘Em Down;” “Unchanging” uses the same Bobby Byrd track Kwamé, Eric B & Rakim, Black Moon and Public Enemy have utilized; and “Rain” (my favorite song on the album) mashes up The Controllers’ “If Tomorrow Never Comes” (Busta Rhymes’ “Everybody Rise”) with Al Green’s “I’m Glad You’re Mine” (Notorious B.I.G.’s “Dead Wrong.” “I Got A Story To Tell,” “What’s Beef”) to create the album’s emotional high point. Please press play on this today, tomorrow, and next week, if you haven’t done so yet. – Meka

Like we mentioned with our rap list, the Top 10 above is compiled from our three respective lists–which will be unveiled, highlighting even more quality music from the year, later this week. Stay tuned.

UPDATE: Personal lists are up! Shake, Meka, and Wongo.