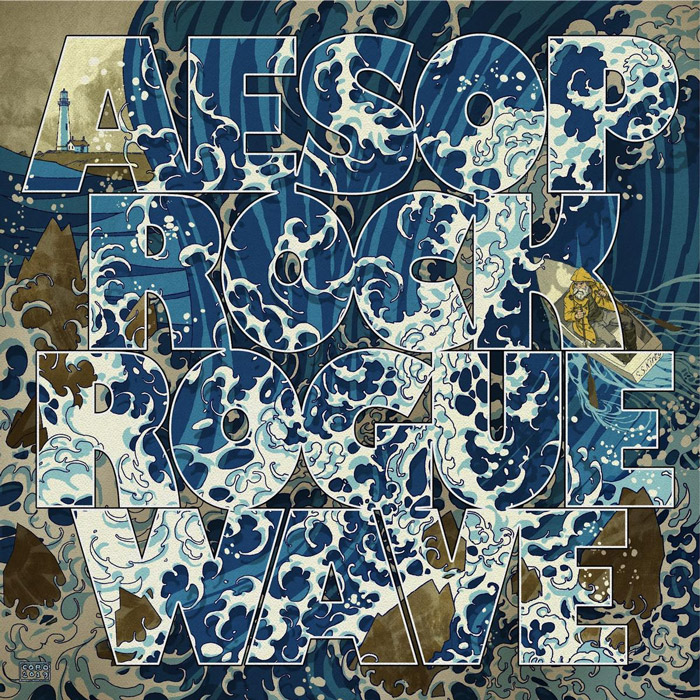 After spending last year pushing his Malibu Ken project with Tobacco, Aesop Rock is back in action with a new standalone single, “Rogue Wave.”

“‘Rogue Wave’ feels like a long journal entry to me – perhaps in the vein of ‘Hot Dogs‘ and ‘Klutz,'” Aesop says. “I really enjoy skipping the hook entirely. It doesn’t always work – but when it does it just feels right. To me, this song is a small boat lost at sea, rowing for hours, days, losing all track of time and direction – 360 degrees of nothing but ocean. I’ve been a little timid over the years to showcase my own drawings, probably because I’ve been out of practice, and also because people know me for my music. That said – I’ve been drawing a fair amount in recent years, and finally decided to collect a lot of the images together for a music video. My long time collaborator and friend Rob Shaw pieced them together in a way that feels similar to the song – an uninterrupted stream of information.”

“It feels strange promoting music in the wake of the event in my previous post,” Aesop Rock continued as he mourns the loss of his good friend and veteran skate videographer, Kurt Hayashi. “However, a portion of the proceeds of the this release will be going to the Hayashi family. Additionally, two portraits of Kurt are featured in the video.” ⁣

RELATED: A GoFundMe for Kurt can be found here.

Directed by Rob Shaw, the video is made up of illustrations from Aesop (who has been continuing to improve his skills) and can be seen below.

The digital version of “Rogue Wave” is available now; there’s also a pre-order for a 7″ vinyl version (limited to 1000 copies) which features both the song and the instrumental, and includes a two-sided print featuring the artwork and the song lyrics, all designed by fine artist Justin Kaufman AKA Coro. The 7″ vinyl, an associated raincoat-yellow longsleeve shirt design, and a couple sticker packs featuring Aesop’s sketches from the video are all available for preorder, as well.