It will go down in American history as the deadliest year on record. Countless families will permanently be affected by a virus that nobody really saw coming until it was too late. Unemployment has skyrocketed, and life will never be the same after the Year of the Rat.

If there is any sliver of light throughout the darkness, it was that most people had a lot more free time on their hands. As such, we were treated to quite possibly the most music released in years. Standards, deluxe editions, anniversary deluxe editions: there was essentially something for everyone (whether we liked or even wanted it). And our Favorite R&B/Alt Albums of the Year list is somewhat reflective of that.

Kehlani took listeners through her not-so-rosy world. OVO Sound’s best-kept secret dropped the best 2020 project from the label. Chloe x Halle grew up and showed out. We were introduced to another rising talent from the West. WizKid and Thundercat returned after three-year hiatuses and didn’t lose a step.

Check out some of the DopeHouse’s personal favorites from the past 365 below and feel free to leave some suggestions in the c-section. – Meka 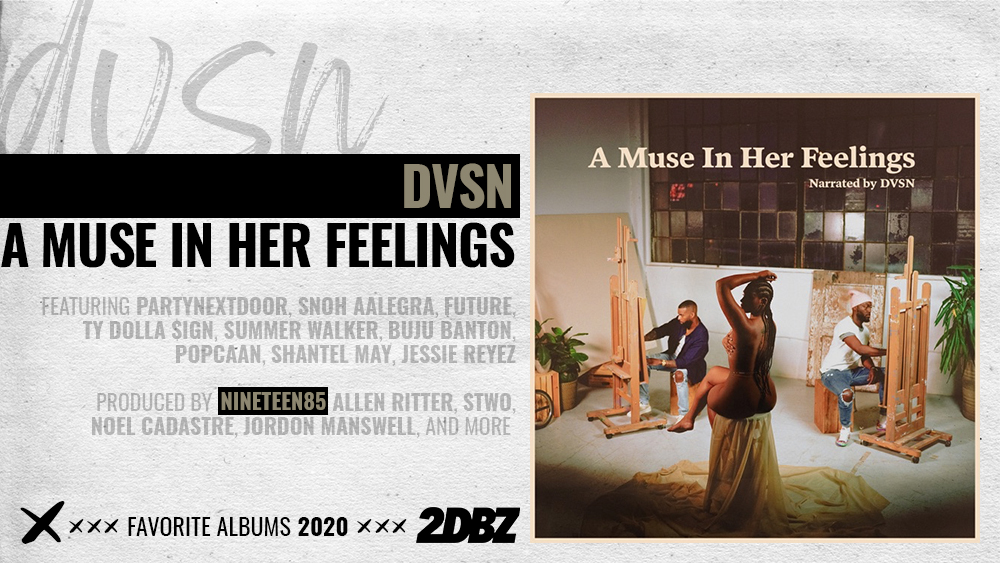 DVSN, A MUSE IN HER FEELINGS
Apple Music | Spotify | Tidal

More than two years after hitting us with their sophomore effort, Morning After, dvsn returned with their third album, A Muse In Her Feelings. The album arrived with their usual collection of baby-making tunes perfect for you and that special someone to play in the background in the midst of this never-ending quarantine. However, this time around, the Toronto duo also gave us a dose of New Orleans bounce and dancehall-influenced tracks for what is easily the most diverse and complete R&B album to arrive this year. 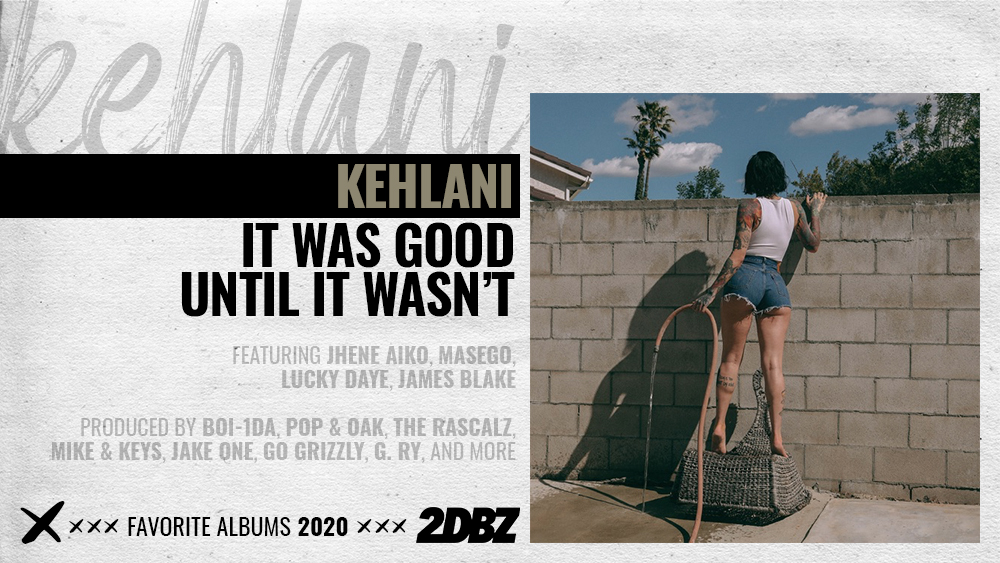 KEHLANI, IT WAS GOOD UNTIL IT WASN’T
Apple Music | Spotify | Tidal

Kehlani is undoubtedly one of the many sweethearts in the music industry, but the Oakland native has been through hell and back in her personal life. Her sophomore album, It Was Good Until It Wasn’t, looked to address one area as it took on the different corners of her love life. The 15-track effort came with a strong message to the nosy folk out there that indulge in the ins and outs of her relationships. By the end of it, Kehlani was able to prove that her approach to love was no different than ours with songs like “Change Your Life, ” “F&MU,” and “Open (Passionate).” Truth be told, in the realm of love, sh*t is good when it is, but when it’s not? Well, we all know how that goes. 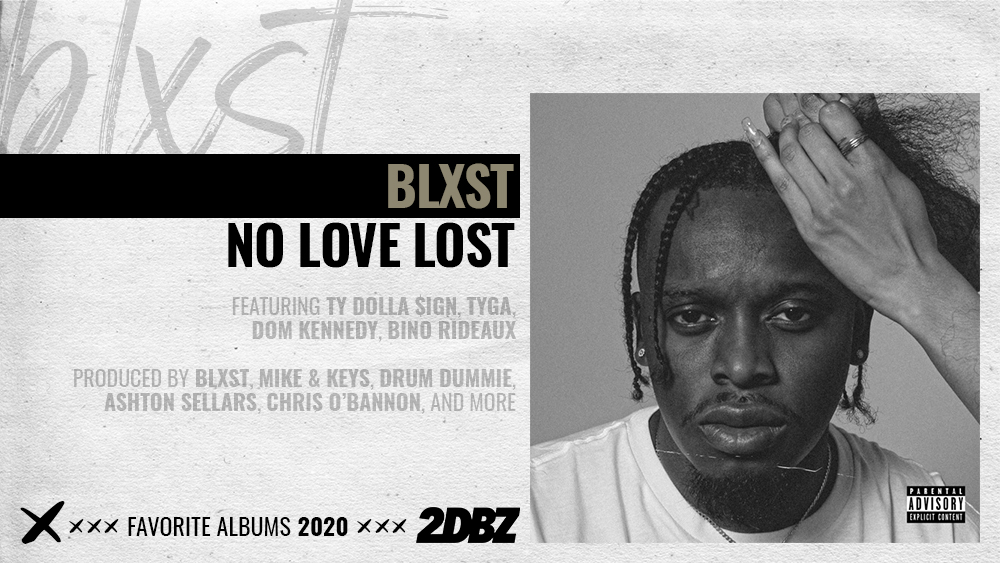 Nathaniel Dwayne Hale, better known as Nate Dogg, passed in 2011, yet the King Of Hook’s influence in the West has remained as strong as ever. Following in the same footsteps of Ty Dolla $ign, Los Angeles’ BLXST dropped one of the best projects to come from the city in 2020 with No Love Lost. A loose concept album chronicling the erosions of both a romantic partnership and friendships while success simultaneously arrives, BLXST nimbly switches between lamenting a looming and unpreventable heartbreak (“Be Alone“) and a good ol’ fashioned who ride (“Gang Slide“) while flexing his own rap skills on the side (“Pressure“). Add in an excellent five-part short film, and a deluxe edition where he invites Dom Kennedy, Ty Dolla $ign, and Tyga to the party, and you have the next up from the City of Angels. Nate would be proud.

RELATED: BLXST: No Hard Feelings And No Love Lost 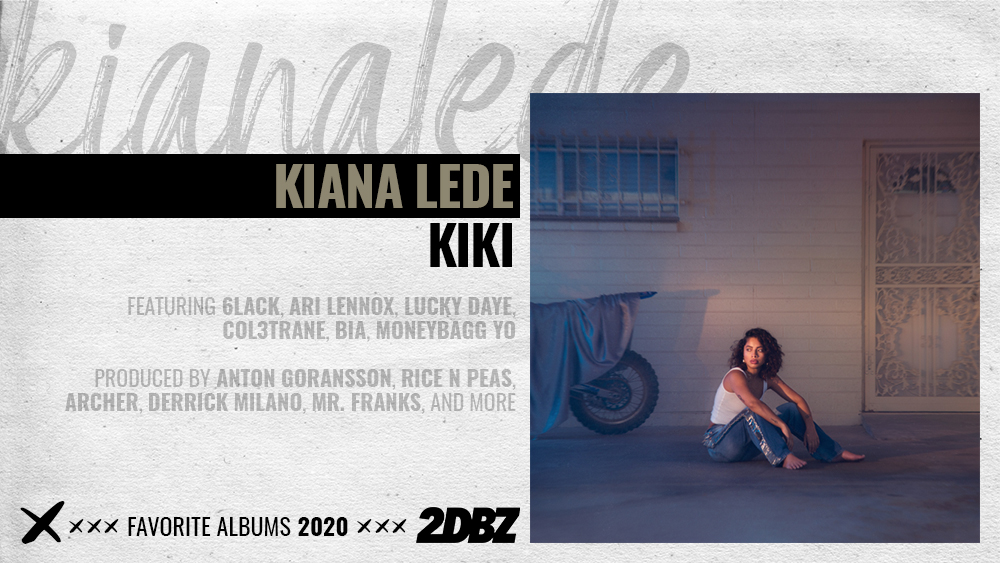 After a pair of promising EPs, Selfless and Myself, Pheonix’s own Kiana Ledé arrived with her debut album, KIKI. The project highlighted her confidence and fears during her journey to love. It came with the frustrating moments brought forth by a difficult lover on “Forfeit.” and “Second Chances.” Yet, the promise of a happy-ever-after is fulfilled towards to end of the album on “Protection.” and “No Takebacks.” Altogether, Kiana exchanged the promise she left us on her first two EPs for excitement with what’s to come with her future releases. 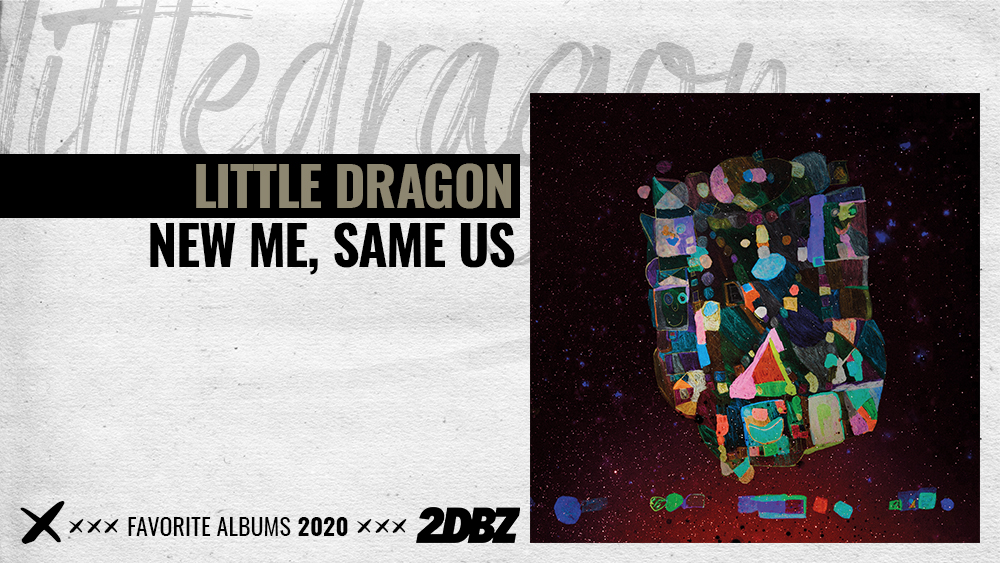 A while back I remember going to a concert (you know, before 2020 said “AHT AHT!” to all of that) headlined by Hiatus Kaiyote and Little Dragon. Since then, the two eclectic groups are almost guaranteed to land on my favorites list (I could use some new HK music soon!), and their sixth album New Me, Same Us is no different. The album’s opener “Hold On” sets the tone perfectly, “New Fiction” is a sublime slapper, and “Are You Feeling Sad” with Kali Uchis will have you feeling anything but. I may never see Little Dragon live again (thanks 2020!), but if I play this album loud enough and close my eyes hard enough it’ll feel like I’m back at Brooklyn Bowl… I think. 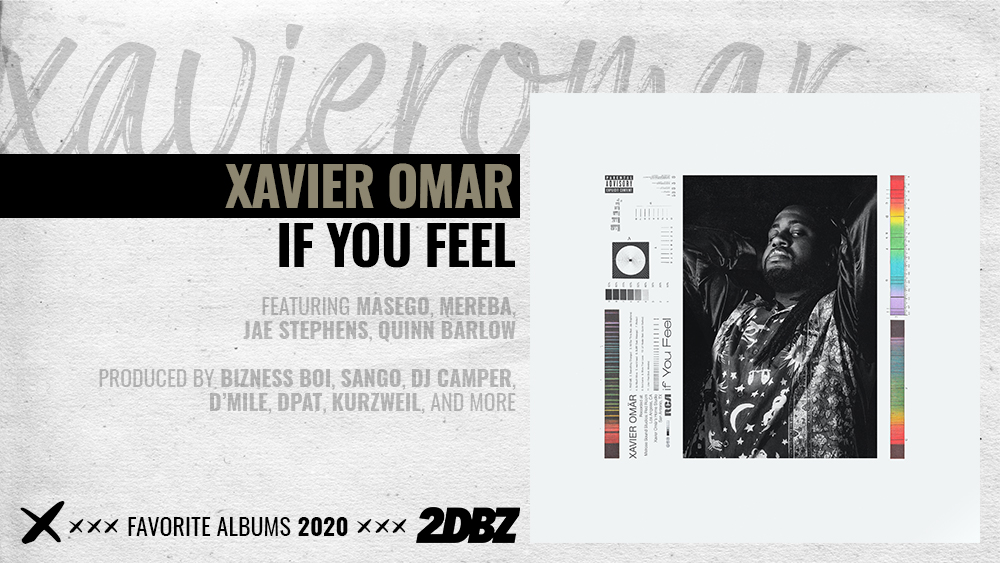 In 2019, Xavier Omar teamed up with Sango to produce their impressive Moments Spent Loving You album. This year, Omar returned to the solo route to return with an equally satisfying body of work with If You Feel. The San Antonio native delivered 11 tracks that delivered a palette of feelings and emotions he experienced in the numerous corners of his life. “So Much More” wonderfully captures love and commitment to it between a couple. “Want/Need” is a spirited anthem that shines the brightest on the album. With limited help from Mereba, Masego, and Jae Stephens, Omar came through with yet another body of work that proves he is way too underrated for the talent he possesses. 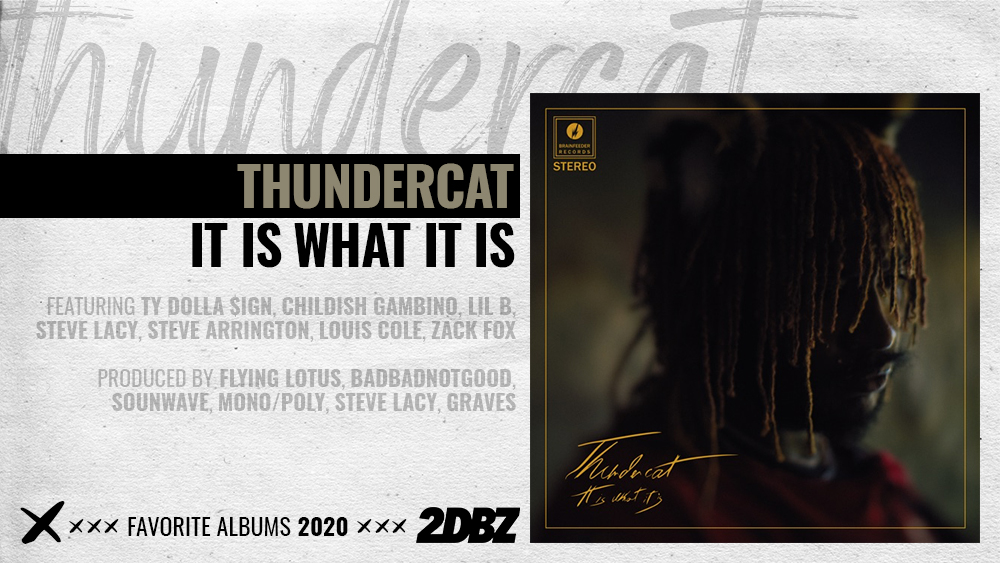 THUNDERCAT, IT IS WHAT IT IS
Apple Music | Spotify | Tidal

It Is What It Is is as perfect a descriptor for the fourth album from Thundercat. The Suicidal Tendencies alum said that the album “is about love, loss, life, and the ups and downs that come with it,” and there are melancholic moments throughout: the somber ode to the late Mac Miller “Fair Chance,” and the short-but-prophetic “Existential Dread” come to mind. However, the rest of the album is packed with grooves and plenty of lighter standouts. “Black Qualls” is one of the funkiest tracks about paranoia this side of the Geto Boys, while “King Of The Hill” is exactly what you’d expect from a Flying Lotus, BADBADNOTGOOD, and Thundercat collaboration: perfection. Not to mention, his anthem about his Goku-themed silky headwrap was one of my favorite songs of the year. It Is What It Is is that post-DRUNK, post-hangover moment of clarity, Stephen Bruner-style. 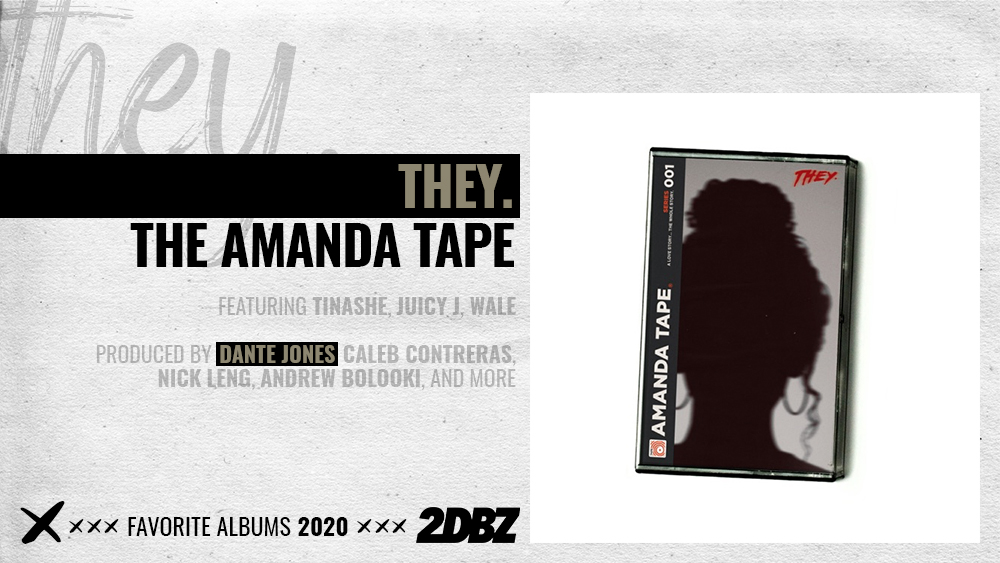 Drew Love and Dante Jones — the producer-singer duo that makes up THEY. — abandoned us for a bit following the release of their 2018 EP, Fireside. Thankfully, 2020 was the year they made their return and they did so in great fashion with their sophomore album The Amanda Tape. Short and sweet with just ten songs, the project captured the highs and lows the duo experienced with women who were both named Amanda. Efforts like “On And On” and “Losing Focus” with Wale captured their growth and improvement from the Nu Religion beginnings they launched from. 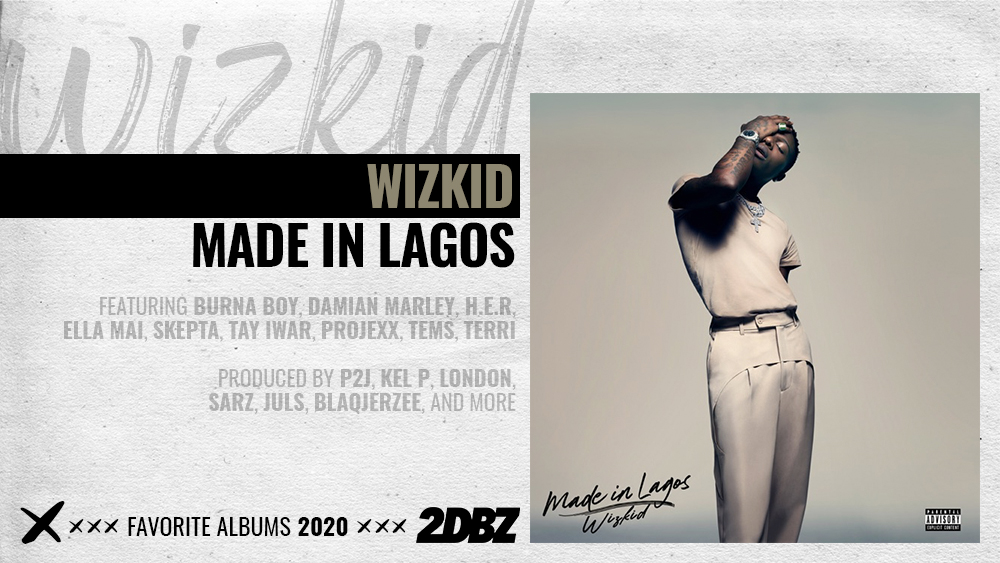 With all due respect to Burna Boy, but ten times out of nine I will always take one WizKid album every few years than a Burna LP every 12 months. Whereas his stateside debut, 2017’s Sounds from the Other Side, was an admirable (albeit mixed bag) attempt to bridge his brand of Afrobeats with pop sensibilities to connect to a global audience, the original Starboy found both his footing and groove combining Caribbean rhythms with a love of all things Naija, Made In Lagos. The H.E.R.-guested “Smile,” “Essence,” “Mighty Wine” and “Ginger” (featuring Burna) are bonafide party-starters, while his latest re-up with Skepta “Longtime” is a worthy follow-up to “Bad Energy (Stay Far Away).” Although Nigeria’s music scene is constantly changing, WizKid’s own legacy will forever be secured. 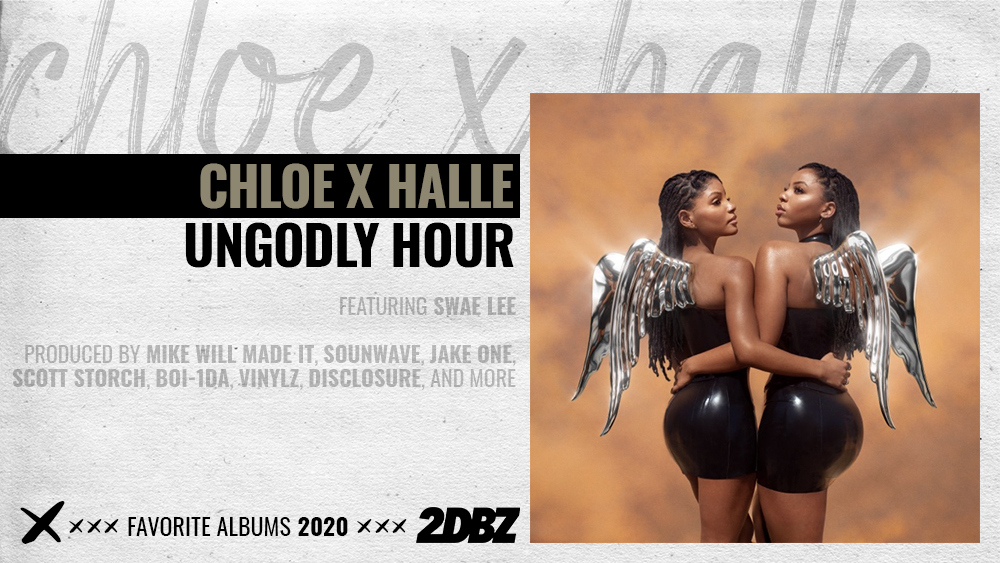 The “This year is my year!” chants that rang as the New Year’s ball dropped at the top of the year were quickly silenced by the coronavirus pandemic and the quarantine that ensued. However, for Chloe x Halle, 2020 was their year despite everything. Their second album, Ungodly Hour, saw them shed a layer of innocence for listeners and reach new heights in their blossoming career. Backed by the popularity of “Do It” and the impressive composition of tracks like “Forgive Me” and “Don’t Make It Harder On Me,” the duo brought the album to their backyard tennis court to take over the summer as sat and watched in awe from the comfort of our homes.

On top of our Top 10, below you can find another round of releases we all respectively rocked with throughout the year. And on a more selective note, all three of us will be sharing our personal favorites later this week.

Our Favorite Rap Albums of the Year [2020 in Review]