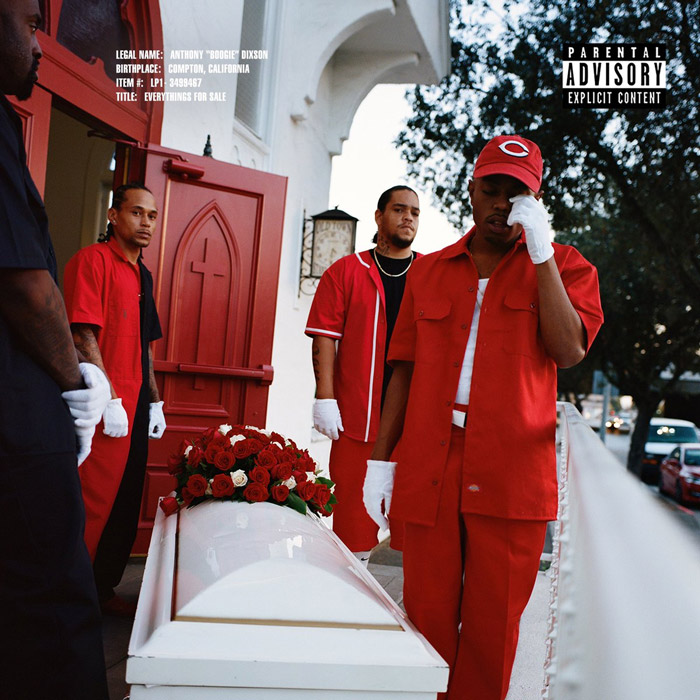 There was a point in my life – at the peak of my Eminem-stan phase – where I only listened to songs Shady Records and Aftermath related. Em, Slaughterhouse, Yelawolf, Kendrick, Bad Meets Evil and a few others were all I played. While I’ve grown and moved on from such a tight box, I found myself reverting back a year or so ago.

I stumbled upon an article that showed a new class of Shady signees, which surprised me after the not-so-successful signings of Yelawolf and Slaughterhouse. Still, after seeing their names pop up time and time again, my inner stan pushed me to at least give one a listen, that one being Boogie. Running through his 2016 project, Thirst 48 II, I immediately became a fan.

With the arrival of 2019, I began to fear Boogie had become the latest label hostage, but my fears were instantly quieted as it was announced his debut album, Everything’s for Sale, would arrive in a couple weeks with features from JID (“Soho“), Eminem, 6LACK, Christian Dcott aTunde Adujah, and Snoh Aalegra (*swoon*).

Everything’s for Sale serves as a rundown of Boogie’s chaotic love life. It’ rather impossible to play the album and not learn a thing or twelve about the Compton rapper. Even though he had the complete option to, he doesn’t paint himself in the best light. Through the cheating, poor parenting and other bad qualities, Boogie makes it clear that he’s far from the most ideal guy. You either understand or pat yourself on the back for being a more adjusted individual. In addition, there’s no happy “I learned from my mistakes and I’m better now” ending and that’s one of the best parts of the album. His problematic ways keep your attention hostage for the entire duration.

One of the major themes of the album is the idea of “time” — not having enough of it, using or wasting it, asking when something will happen. On the intro track, “Tired/Reflection,” which serves as a hazy reminder of Kendrick’s “Sing About Me, I’m Dying of Thirst,” Boogie is questioned about his style of music because they’re tired of the same old trick. He later admits, “I’m tired of working on myself, I wanna be perfect already/ I’m tired of the dating process, I wanna know what’s certain already.”

Throughout the album, Boogie shares a number of anecdotes about his relationship with women. While it could be perceived as different relationships rather, it’s a long and problematic relationship where he raps about them out of sequence. “Swap Meet” can be perceived as the beginning of his love trip, as he labels a certain woman as priceless but passionately professes that he is more than willing to pay whatever it takes to have her. “Skydive,” presents a nervous and nauseous Boogie as he nears the open door of a plane, preparing to jump into the new relationship. However as everything seems to be going all well and good, “Silent Ride” and “Lolsmh (Interlude)” show him as an unfaithful man, serving as the low points in the relationship.

For the duration of the relationship, we see Boogie increase his maturity, becoming more aware of his toxic ways. Despite his obvious unfaithful past, Boogie refuses to acknowledge his mistakes on “Lolsmh,” directing the blame to his girl instead. He acknowledges his ways on “Self Destruction,” painting the picture of finally realizing you’ve messed up and making an effort to correct it until you mess up again and just act like it never happened.

The growth continues on “Skydive II” with 6LACK. While he and his partner have been clashing frequently, we see him take a second to think and realize it’s only a result of their insecurities and fears of the relationship and that they must conquer them before they progress forward. Moving to “Whose Fault,” the fighting has returned, but now the relationship is dead, leaving Boogie as a single father. Fighting through the ever-so-tricky baby mama struggles, filled with loud arguments and poor parenting due to pettiness, he again concludes that rather than continuously blaming either, they must first take responsibilities for their mistakes saying, “We already share the pain, how ’bout we finally share the blame?”

After my first listen to the album, I without a doubt loved it, but I was a bit confused on the album title. After a deeper dive, it soon dawned on me that the title was perfect for the content it held. The highs, the lows, moments filled with love and hate and so much more, it surrounds everything in Boogie’s life: his love life, his music, his roots and his son. Putting his all on an album to sell to the world, the title soon rings true and makes 100% sense: Everything’s for Sale.

Boogie’s ‘Everything’s for Sale’ is an Unfiltered Look at His Thoughts was last modified: February 1st, 2019 by Wongo
Tags:2dope, boogie
Share:
Previous Post