Actor Page Kennedy Exchanges Words With Lil Yachty, Goes In On Mumble Rappers With “No Offense” While his name is not really known in rap circles (yet), best believe actor Page Kennedy can hang with some of your most favorite and revered lyricists.

The Detroit-born actor portrayed the infamous character U-Turn in Showtime’s comedy drama Weeds as well as Radon Randell in Blue Mountain State, and now he’s turning his sights on rapping, essentially aiming his scope at “mumble rappers” who have taken over the game.

To show and prove just how hungry he is, Page recently released a video for a new banger, “No Offense” which directly targets the infestation of mumble rappers, partially in response to a heated exchange the actor/rapper had with Lil Yachty, in which the former sort of trolled the “teenager with emotions” and goaded him into a rap battle (see a screenshot of the exchange below). 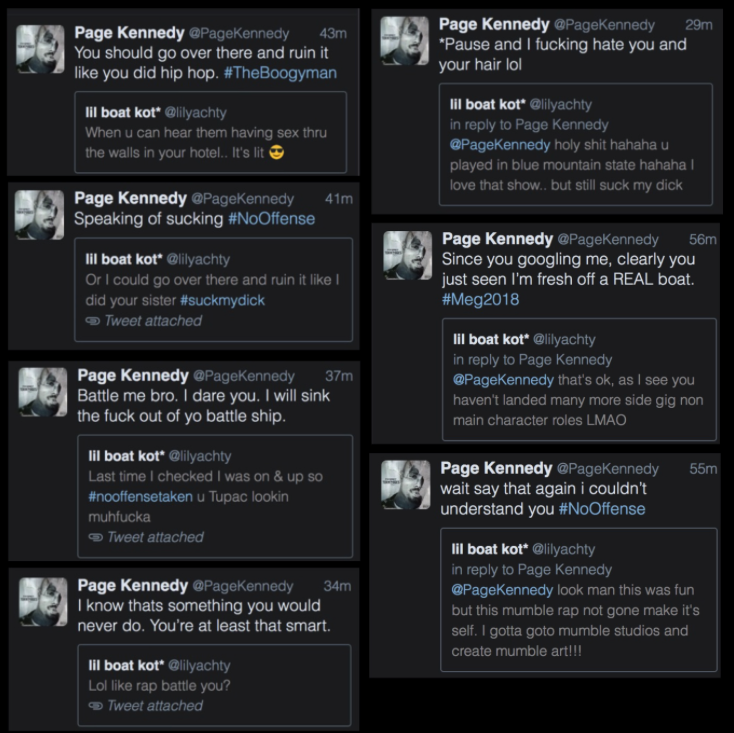 Trolling aside, the real goal of Page’s new video is to set a fire of inspiration to create refreshing, original content in the continued rise of the millennial generation of rappers; still, it’s a pretty brutal lesson in Hip-Hop and emceeing as Page goes in, bar for bar over Onyx’s “Last Dayz” instrumental (made famous once again by Joe Budden).

Here’s a feeling/filling I got with no Novocain, a super dick that fly fast in the slowest lane // “super dick,” “fast,” “Lois Lane” // Just making sure we on the same Page, y’all know the name // Actor-slash-rapper, social media takeout // Discharge hot shit, no gonorrhea breakout

Watch the video below and keep it locked for the arrival of Torn Pages.