Now that we’ve surpassed the halfway point of 2016, the DopeHouse will be offering our Midyear Reports of the first six months.

Yesterday, we shared our Top 10 Hip Hop Albums of the year (so far). And today, we’re highlighting the biggest headlines — which, unfortunately, were stricken by tragedy and loss.

Countdown with our Top 10 Stories of the last six months below, and stay tuned for our breakdown of TV shows, non hip hop albums, songs, and emcees, which will be revealed throughout the week. 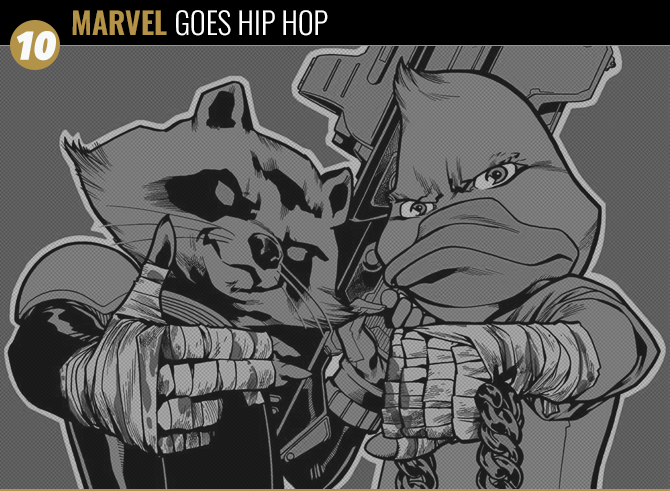 The end of 2015 saw Marvel incorporate hip hop album artwork for their variant covers. The result was deemed a success and the initiative continued into 2016. Spearheading this movement was the Black Panther series with Ta-Nehisi Coats at the helm. Hailed as a success, it appears that Marvel is fully engaged in diversifying its audience by tapping into a community that has been reading comic books for years. Oh, and seeing Chadwick Boseman bring T’Challa to life in Captain America: Civil War and with the knowledge that Ryan Coogler will be at the helm of the Black Panther film, it’s never been a more exciting time. — Andreas Hale

Perhaps it’s the fact that his debut album turned 20 this year. Perhaps he’s gotten tired of simply running his many, many businesses and needed a brief respite from that. Perhaps it was Leomande. Whatever the case is, JAY Z decided to come off of his Andre 3000-esque musical hiatus and get busy on Pusha T’s “Drug Dealers Anonymous” and DJ Khaled’s “I Got The Keys,” before refusing to be silent about society’s injustices on “Spiritual.” While there’s no word that an album will drop, it’s nice to see the Rap Game Grey Mamba coming out with music. — Meka Udoh 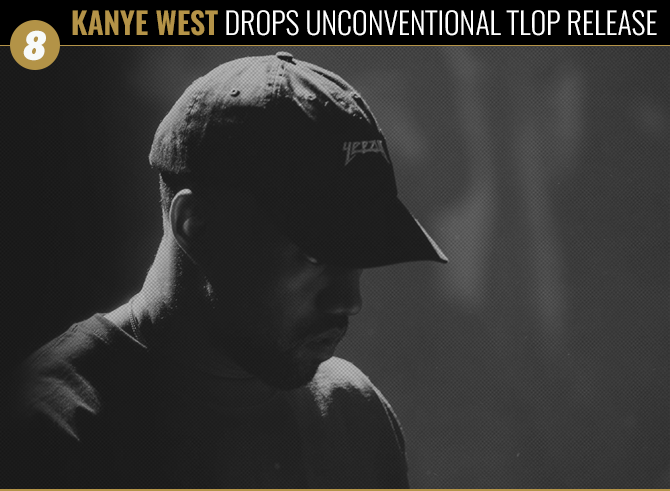 If you look back at posts on the site revolving around The Life of Pablo, you’ll notice far too many slashes and strikethroughs in such a short period of time for an album. Between multiple name changes, an always-evolving tracklist and a piece of paper with the original tracklist signed by everyone from Andre 3000 to Chance the Rapper to Kylie Jenner, Kanye’s “living, breathing art piece” finally debuted not not on iTunes, but at a fashion show for season three of his clothing line. It was absolute chaos and, at times, underwhelming, but once the music of a mad man settled, it made for one of the most sonically gifted and pleasing albums of the year. — Patrick Glynn

RELATED: Kanye’s TLOP is a Chaotic Ride Through A Madman’s Mind 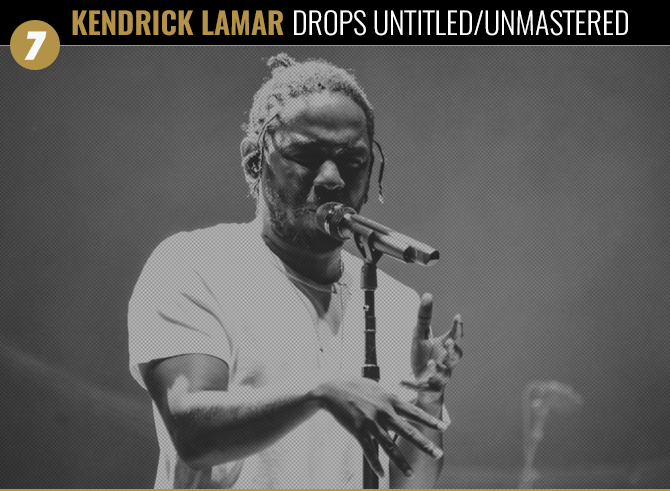 The story behind Kendrick Lamar’s untitled/unmastered is quite an interesting one. After performing unreleased songs on The Colbert Report’s series finale in 2015 and The Tonight Show in January, Kendrick used the GRAMMY stage for a fiery performance of yet another unreleased song. A couple weeks later, TDE CEO Anthony “Top Dawg” Tiffith unveiled their release schedule for 2016 — including a new project from K. Dot. The news spread like wildfire across social media, because, TDE, and as the story goes, Top Dawg felt pressured to release untitled/unmastered at the urging of LeBron James’ request. On March 4th, eight untitled tracks from Lamar mysteriously appeared on Spotify, before finally surfacing on iTunes later that day as untitled/unmastered, topping the Billboard 100 charts in its first week. — JES7 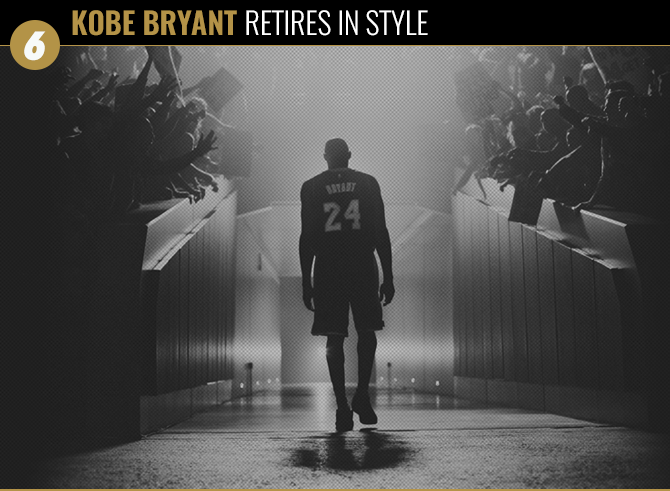 I mean, why wouldn’t he. It was Kobe Bryant’s final game as a member of the Los Angeles Lakers, a long-running chapter that spanned 20 years, 1,293 games, five rings, one team, and enough smack-talking to make a New York Times best-seller. Let’s not front like it wasn’t his time though; Kobe was literally put together with hemp and chewing gum at that point, and watching him lurch off the court covered in ice packs and Ace bandages made my bones hurt. Still, watching him hang 60 on the Utah Jazz — and denying them a playoff spot in the process — reminded us that his legacy will never be forgotten. — Meka Udoh 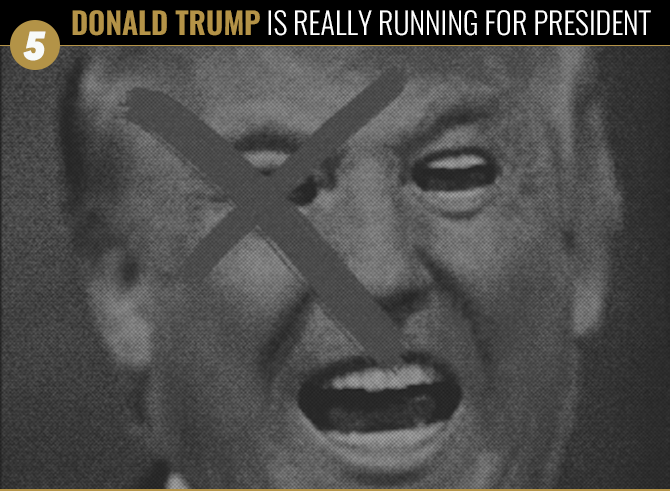 I’ll be real: I’m not voting in 2016. Call me names, say I’m not about change, I don’t care. Look at what we have to work with for President: a woman with questionable “work practices” (her husband wasn’t that much better) to say the least, or the physical embodiment of everything that is wrong with White America, from hyper-misogyny to flat-out racism and bigotry. I take it back, I will vote in 2016… for whomever is the nominee for the Green Party. — Meka Udoh 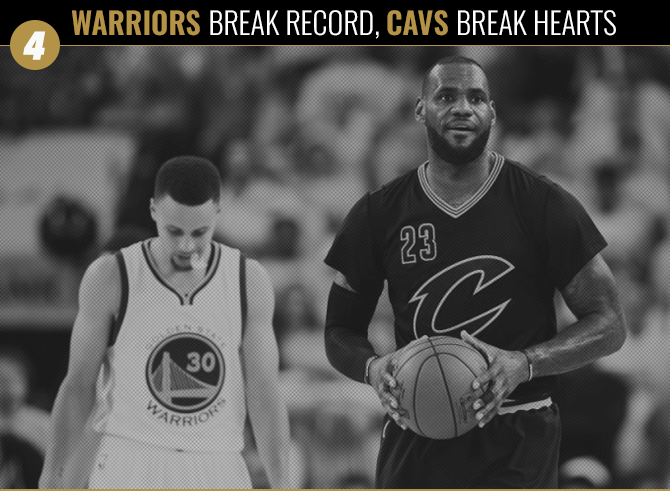 I’m young, but the 2016 Warriors have been the most fun team I’ve ever watched. The 2013 Spurs and the ’01 Lakers are up there, but the Warriors’ ability to score 72 points in four seconds sets them just ahead of Kobe and Shaq averaging 28 points a game each over 82 games. The two-time MVP Steph Curry-led team finished with the best record over 82 games ever — 73-9 — and came back from a 3-1 deficit in the Western Conference Finals. However, the season ended as bitter as possible due to LeBron James cementing himself as a top five basketball player ever (and the best chase-down blocker of all time) as the Warriors ironically lost the Finals after being up 3-1.

Years from now, the biggest impact from from this postseason may not have come from The Finals, but rather the series before in the West where Kevin Durant’s hope of winning a championship in Oklahoma City was finally deemed incurable after nine years. But for now, we’ll marvel at the three-point shooting, defensively malicious prowess of the 2015-2016 Warriors. — Patrick Glynn 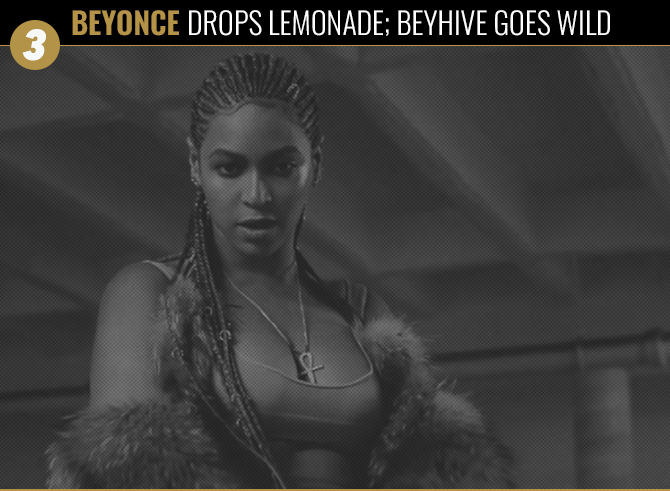 Three years ago, Beyoncé set off a trend dropping surprise albums with her self-titled effort. While she wasn’t the first to ever do it, she was the first of her magnitude to drop a full album with absolutely zero notice to the public — let alone have visuals for every song ready at the drop, too. While the whole damn world is dropping albums with the “surprise” method nowadays, Beyoncé proved with Lemonade no one can do it quite as good as her. An ominous trailer shared on Twitter told us “Lemonade” — whatever it was — would debut on HBO on April 22 at 8pm. Turned out, it was an hour-long musical with a new album as the soundtrack. With complete reason, Beyoncé and her Beyhive following made sure we didn’t forget who exactly inspired Lemonade, making it a defining moment of both the year and Bey’s career. — Patrick Glynn 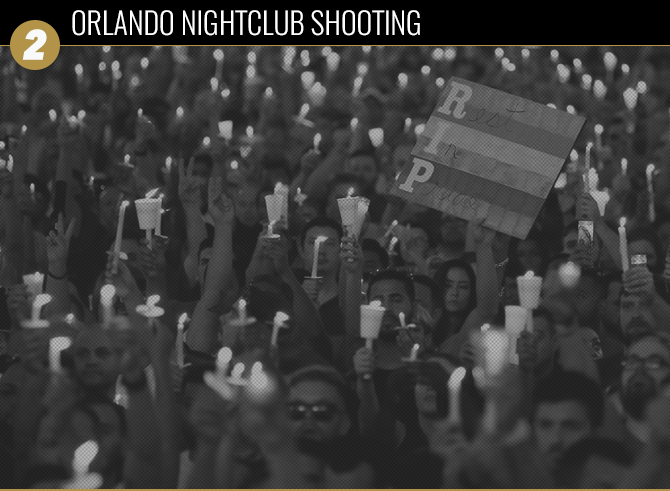 With terrible tragedies unfolding on what almost seems like a daily basis, it’s quite the burden having to wake up and hear the day’s latest news. Nearly a month ago, the world was stricken with news of a gunman who discriminately opened fire on patrons at Pulse, a LBGT nightclub in Orlando, which left 49 dead and another 53 wounded. Just within the past week, Alton Sterling and Philando Castile — two young Black men from Baton Rouge and Minnesota, respectively — were gunned down by the hands of police. Civil rights are being trampled on; discrimination against race, religion and sexual orientation is at an all time high, which brings to light this legendary Mobb Deep line: “There’s a war going on outside, no man is safe from.” Unless you’re a white supremacist. — JES7 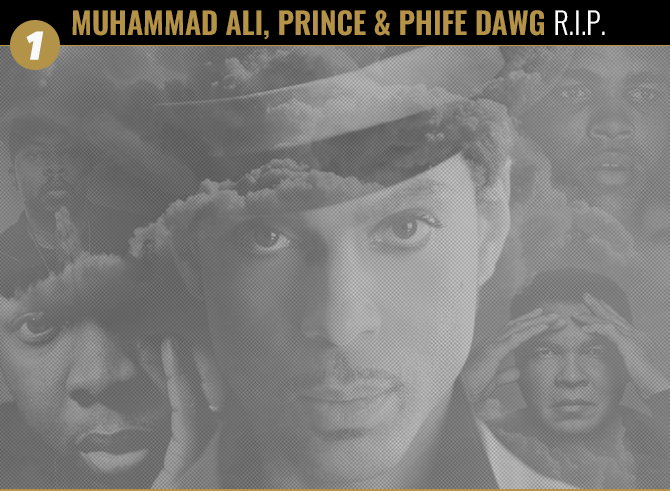 Death: we know it’s coming, yet are never really prepared for it when it happens. Per usual, it struck the Black culture, but never did we imagine who it would take: Muhammad Ali, Prince, and A Tribe Called Quest’s Phife Dawg all passed within a stone’s throw of each other (not to mention, David Bowie tragically passed before all three of them, and shortly after the release of what is now his final studio album Backstair). 2016 isn’t even over, and it already needs to be covered in bubble wrap & thrown into some rice. — Meka Udoh

EDITOR’S NOTE: We made a conscious decision to swap Beyonce with the Orlando shooting. Originally ranked based on overall traction on 2DBz and social media impact, the fact of the matter is that what happened in Orlando is far more significant than any album release. Although Beyonce released a project that emphasized love and a sense of pride amongst African American women, what took place in Orlando rattled us to our core. We are a music site first and foremost,  however, we recognize that music has to take a backseat to real life situations.