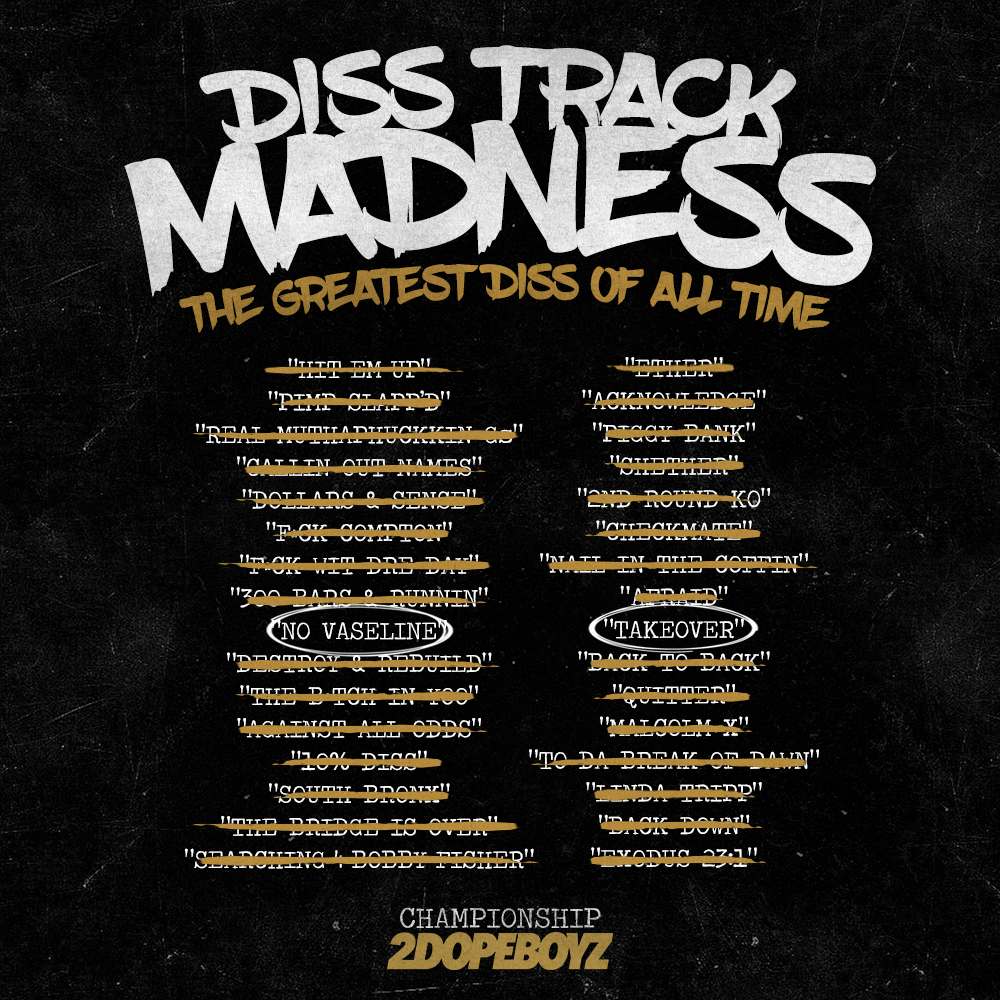 From 32 to 16, to the Elite 8 and Final Four, we’ve finally reached the final round of Diss Track Madness. Check out how everything stacks up below. 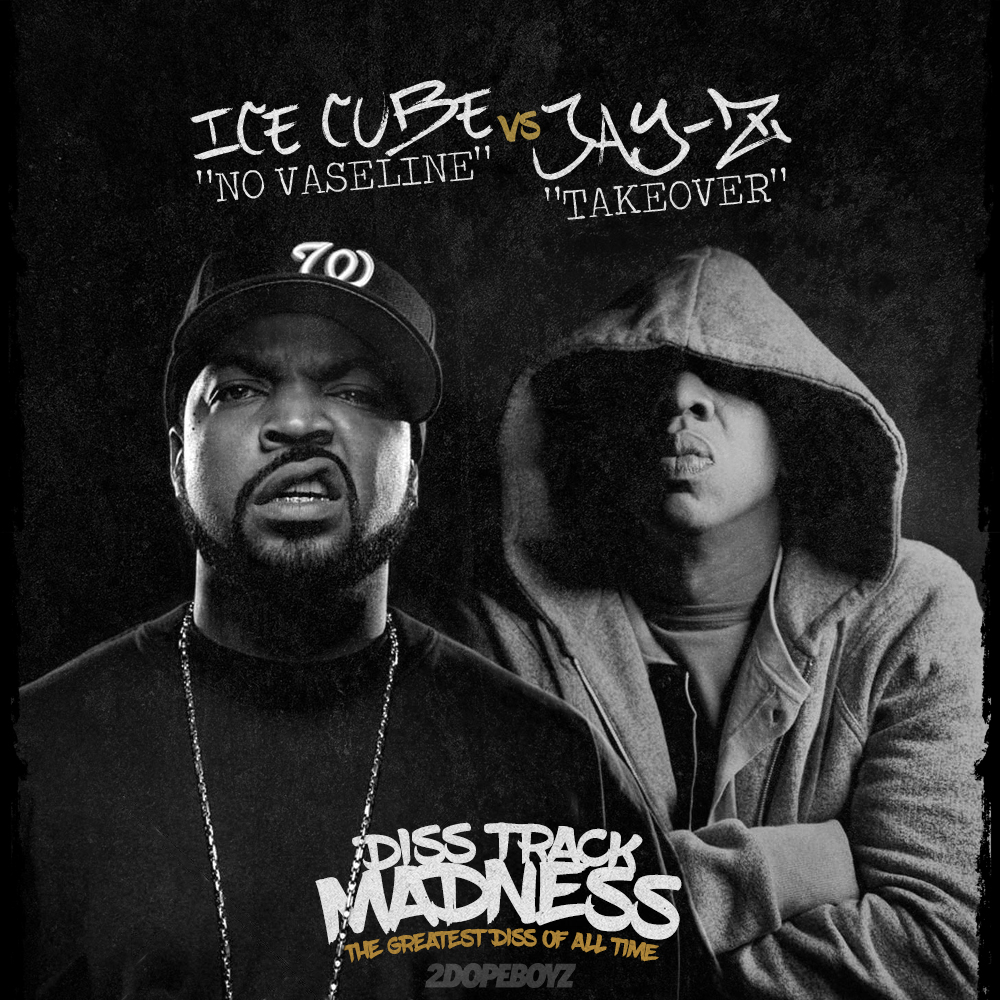 How Did We Get Here?

The Final Four was easily the most hotly debated of all of the matchups to this point. The DopeHouse and the readers debated furiously on social media and in the C-section regarding who would advance. Although most predicted when the tournament started that Tupac would advance to the championship round, he ended up being upset by Ice Cube’s “No Vaseline.”

That’s certainly going to have people up in arms, right?

But when you peel the layers off of the two diss records, you start to realize that “Hit Em Up” has some flaws that prevented it from advancing to the finals.

Although “Hit Em Up” was a scathing diss that we’ll all remember with an opening set of bars that are nothing less than legendary and a classic shit talking lesson at the end, what really hurt it was the addition of The Outlawz, who added little to nothing. It would have been better off if Tupac carried the entirety of the song on his back. But, if we’re going to be completely honest, Pac’s second verse started off pretty weak and was more style over substance. And it lacked an abundance of something that will be an ongoing theme here: Facts.

The intro to “No Vaseline” set the stage for what was to come. Ice Cube had a mouthful of vitriol for his former friends and opened with a venomous collection of soundbites that did a great deal of damage to his former crew before Cube launched into his verbal assault. The reality was that Cube was battling with facts and not speculation. N.W.A. simply wasn’t the group they once were without the presence (and pen) of O’Shea Jackson. They tried Cube on 100 Miles & Runnin’ and Niggaz4Life but all they did was rattle the cage because it was evident that Cube was the glue that held that group together. Without him, N.W.A. would have been making records that sounded more like Bloods & Crips Bangin On Wax with great production. As soon as Cube bellowed “Goddamn, I’m glad y’all set it off” over Sir Jinx’s sampling of “Dazz” by ’70s funk band Brick, you knew it was trouble. What came was a brutal bar for bar beatdown that aired out all of the dirty laundry. The wordplay was nasty and oftentimes funny. But it was the truth that Cube spewed that put this over the top.

That’s the reason why Jay Z ended up squeezing by Nas.

“Takeover” was like a snowball barrelling down the Jackson Hole mountain. As the song progressed, Jay was ramping up to something monumental and it just kept getting bigger and bigger. For a rapper who was the king of subliminals, it caught everyone by surprise when he opened his second verse calling out names. The mere suggestion that he had money stacks that were taller than Prodigy had us all questioning if he was speaking the truth because, you know, Prodigy isn’t a very tall guy. It was all made worse when Jay Z delivered the fact that when he was still hustling blow on the streets, Prodigy was taking ballet classes. Ouch. Of course, “We don’t believe you, you need more people” has become part of our lexicon. But before he let Prodigy off the hook, he blew a shot into the air at Nas.

The snowball was even bigger.

There’s really no need to revisit what was said word for word here as Hov took aim at a rapper who was recognized for his immense talent but also was slowly descending as he struggled to find his footing between elite lyricist and a participant in the Jiggy Era. The Roc-a-Fella emcee swiftly called out Nas for this tumble and piled on him by stating that Horse outshined Nas on “Oochie Wally,” which many people agreed with. It was a barrage of fact-based bullets that cut down (and eventually woke up) his Queensbridge rival. And the fact that he stated that he made a hot song out of a Nas line? Good Lord.

With “Ether,” there’s no doubt that it’s the song that really brought Nas back from his zombie trudge though the Jiggy Era with songs that left us shaking our heads. Nas really, really, really came for Jay’s neck after what appeared to be a funeral for his career. But Nas also spent a great deal of time fending off the idea that he was garbage before launching into his assault. And while it was truly an epic diss, Nas lacked facts. Sure, we laughed at “Gay-Z” and “Cock-a-Fella” as well as the comparisons to a camel, but where were the facts? Nobody believed Nas when he said that Jay Z was wack compared to Beanie Sigel. But it sure sounded good at the moment. Nas was playing a game of the dozens and making fun of Hov and his past while Jay Z came fully armed to embarrass his opponent in the present day. In retrospect, it was hard to see this one through and put it past the diss track that made him go back to his roots.

So now you know how we got here. Jay Z versus Ice Cube. No Vaseline vs. Takeover. What is the greatest diss track of all-time? 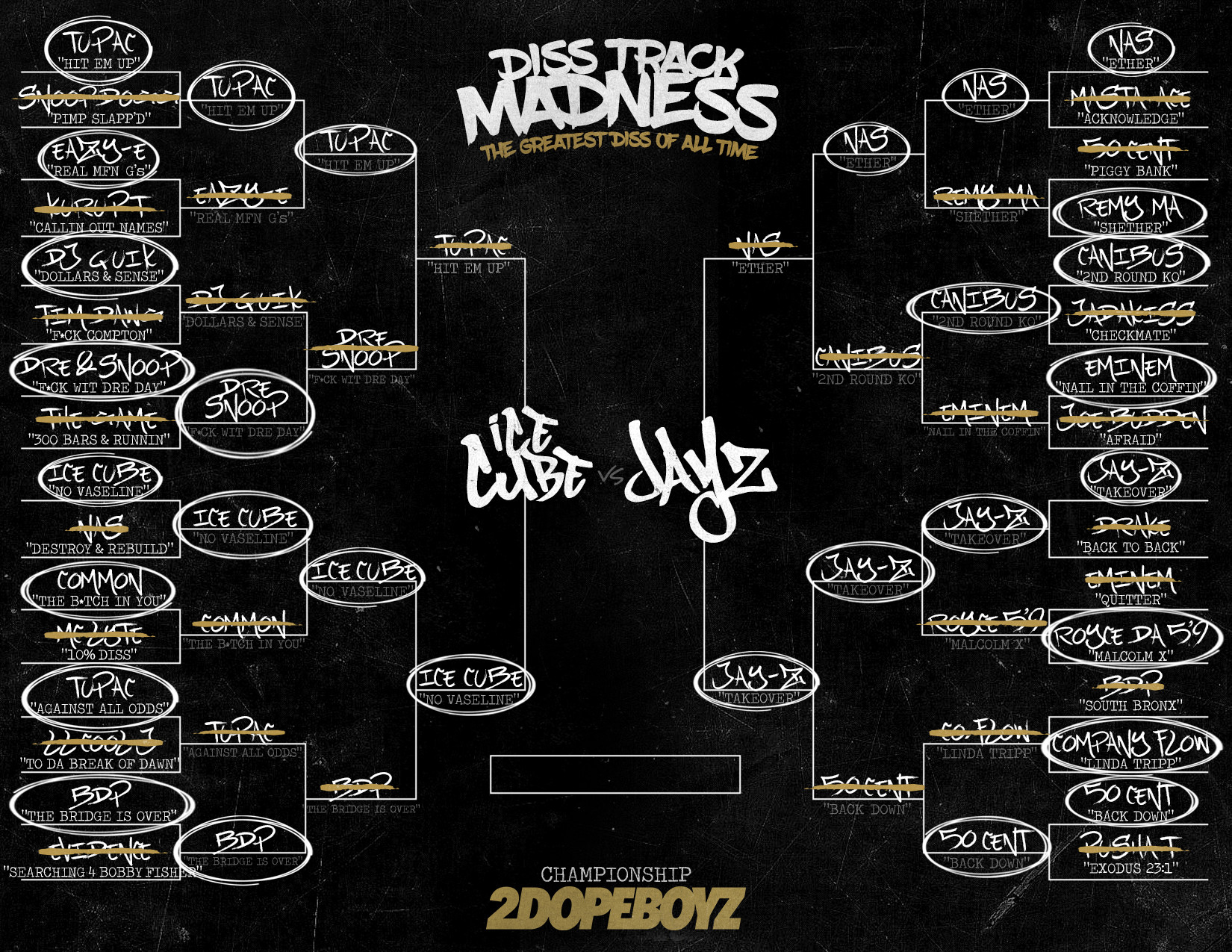