Now that 2017 is officially in the books and everyone has recouped from their New Year hangover, we wanted to help recap the last 365 with a list of our favorite albums.

In a year where… well, let’s face it: 2017 was nuts, to say the least. Collaborations were all the rage, dropping from the skies as if they were competing in a Tables, Ladders and Chairs match: Big Sean and Metro Boomin, WESTSIDEDOOM, Talib Kweli and Styles P, Trick Daddy and Trina, and — of course — white supremacy and racism ran rampant in the last 365 days. Joe Budden essentially quit rapping and started making moves with Puff. Jay Z released one of his most personal albums to date. SZA finally arrived. And, somehow, the world hasn’t fallen completely to pieces despite Agent Orange doing his damnedest to do so.

Music became more than simply the soundtrack to our lives. It became an escape from the terrible realities of our worlds. It became a political platform, where everyone from YG to Macklemore and every shade in between openly expressed their opposition of the government. Despite the advent of the so-called “SoundCloud rap” generation, there were still rappers like Black Thought who proved that lyricism is alive and well.

The Year of the Rooster has ended, and now we’ve entered the Year of the Dog. Several notable albums reach their platinum anniversary: Vol. 2: Hard Knock Life, Aquemini, It’s Dark & Hell Is Hot, The Love Movement, Moment Of Truth, 400 Degreez, N.O.R.E. and Black Star, among many others. If our favorites of 2017 hold up, then perhaps one day we’ll be celebrating their twentieth anniversaries too.

You know the drill: peruse, critique, insult, bark at us for not including your favorite project on our lists, and so forth. – Meka Udoh

Meka’s Top 3
Jay-Z’s 4:44
Kendrick Lamar’s DAMN
WizKid’s Sounds From the Other Side. 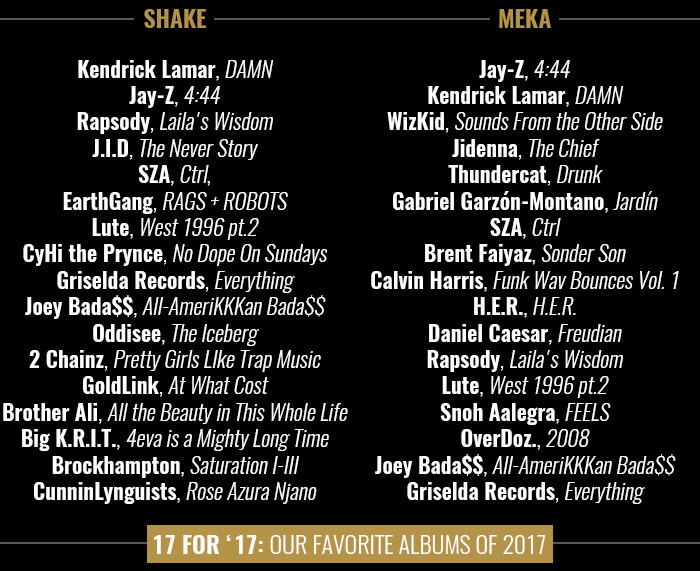