The Hip-Hop world can be extraordinarily active at any given moment. If you aren’t online 24/7, you are certain to miss something that went down with your favorite (or most despised) artists.

With that comes The Re-Up, a monthly run down the biggest news, songs and features — ranked based on traffic and cultural impact.

Although we didn’t lose an icon like prior months (Ali, Prince), the July edition is still, unfortunately, led by tragedy with the killings of Alton Sterling, Philando Castile, and near-fatal shooting of Charles Kinsey. Something needs to change, but will it?

From there, the race for POTUS is making our skin crawl, Durant left Westbrook in OKC like a scorned prom date, Joe Budden dissed Drake like sixty times, The Cool Kids reunite, and more.

With that being said, here’s The Re-Up for the month of July. 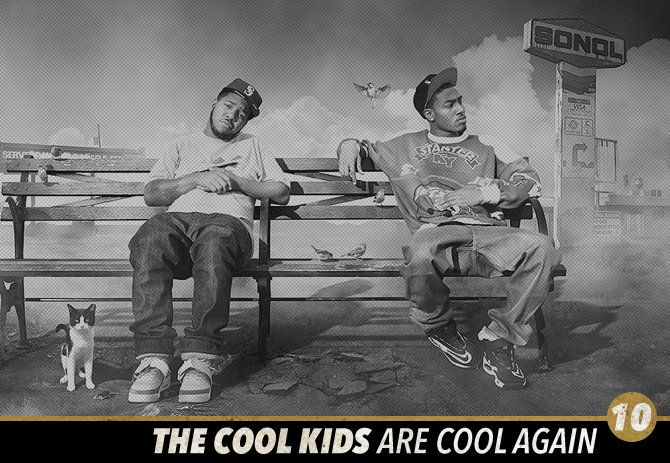 After a media-hyped reunion came and went this time last year, The Cool Kids are officially back! “We really felt like we hadn’t really finished what we started,” Chuck Inglish said. “They took our styles and ran off. We coming back for it all.” And after they’re done putting the final touches on their respective solo projects, Chuck and Sir Michael Rocks will be doing just that. Be on the lookout. — Shake 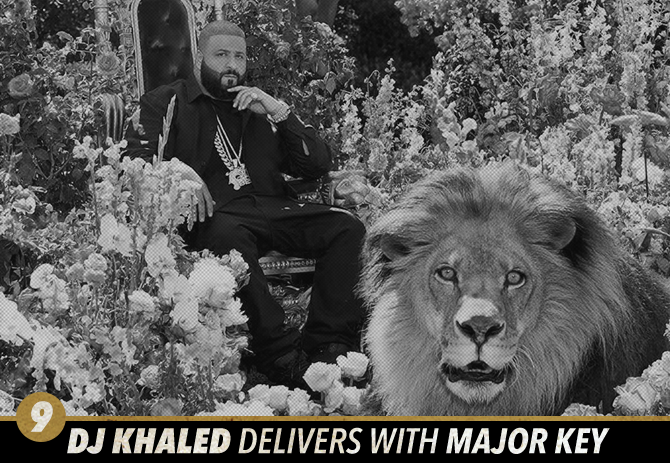 Let’s be honest here because nobody thought DJ Khaled would deliver an album like this. Sure, the Snapchat king who loves his Soy Milk has always been popular amongst the casual rap audience. But never did we think that he’d put together something as potent as Major Key. Jay Z, Drake, Big Sean, Kendrick Lamar, Jadakiss, Bryson Tiller, Nas, J. Cole, Busta Rhymes, Fabolous and Wale are just a few of the names that are featured on the project. But the potency of these tracks are something to marvel over. Kendrick Lamar absolutely destroys “Holy Key” (and Big Sean certainly held his own) while Nas menaced a Fugees sample on “Nas Album Done.” It’s easy for Khaled to get a bunch of stars on one project but he squeezes the best out of most of them for this surprisingly dope album. — Andreas Hale 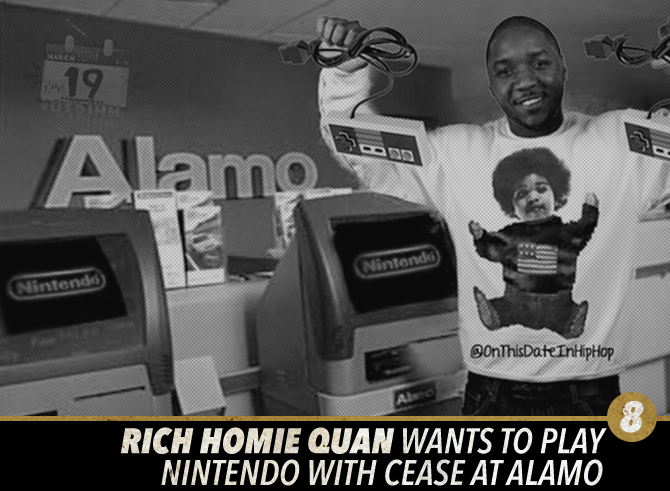 As much respect and appreciation I have for Questlove and his numerous contributions to the art of music, I’m going to have to wholeheartedly disagree with him on this topic.

At the 2016 Hip Hop Honors, Quan paid tribute to Lil Kim by performing “Get Money” with her. The problem was, him struggling mightily through The Notorious B.I.G’s verse. Questo came to his defense, though, suggesting that due to America’s “disposable art” tendencies that influenced and ultimately led to RHQ flubbing the verse.

I agree with his sentiments to an extent, but not when it comes to this scenario. My issue with Rich Homie Quan is that not only did he willingly sign up for Hip Hop Honors, I’m pretty sure that both he and his team knew exactly what he was going to perform for weeks. He had more than enough time to prepare for and memorize a 20-year-old 90-second rap verse, and he still screwed it up then blamed it on “teleprompter malfunction.” No matter how you slice it, there is no explanation for that. — Meka Udoh 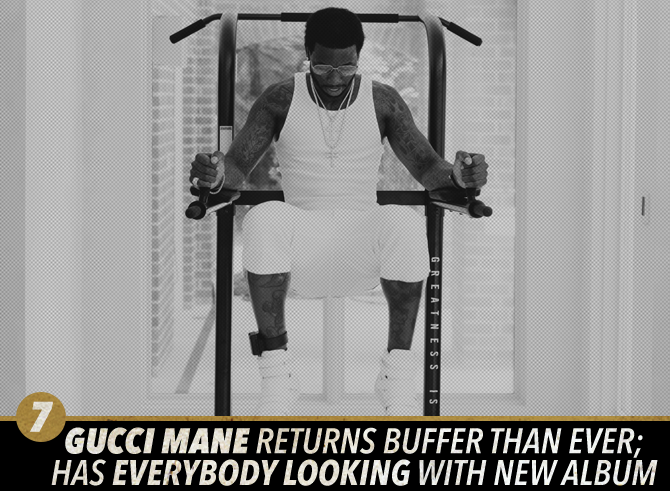 Being born and bred in Southern California, I was not a fan or even casual listener of Gucci Mane. This is neither an insult or negative criticism either: you spend your formative years listening to one style of music, and you won’t really care for much else. And yes, I was equally fascinated by New York’s culture and music as I was with West Coast music. So, music from Gucci Mane wasn’t too high on my “priorities” list.

As I’ve gotten older, however, I’ve grown to appreciate and be open to other sounds as well, and when I briefly dated a woman from the South I was formally exposed to his true influence on the entire Southern region. Keep in mind, this was back in 2011, and back then she described him as a near-deity while reciting some of his obscure mixtape lyrics like a Dr. Seuss book.

These days, I still can’t claim to be a mega-fan of Gucci Mane (once again, this is neither an insult or negative criticism). However, I am huge supporter of Radric Davis, who after spending another federal government-sponsored iron vacation has decided to change his life for the better. He’s in shape, he’s deeply in love with his fiancé, he’s sober, he’s healthy, he’s hilarious, and most importantly he’s happy. And as a person who has had to face and deal with his own personal demons and is now in a much better place physically, mentally, emotionally and spiritually, I’m here for all of that. Plus, Everybody Looking is pretty good too. — Meka Udoh 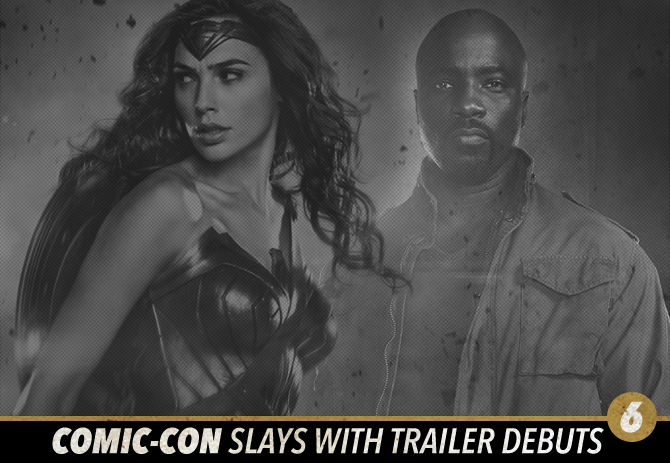 If you are a comic book nerd, this year’s edition of Comic-Con delivered on all fronts. If you’re a Marvel fan, you got trailers for “Doctor Strange,” “Luke Cage,” “Iron Fist,” and “The Defenders” while also seeing the cast of “Black Panther” get into formation. But the DC fans got more than their money’s worth with the “Wonder Woman” trailer and “Justice League.” Ultimately, everybody won this year. Now let’s just hope these movies deliver. — Andreas Hale 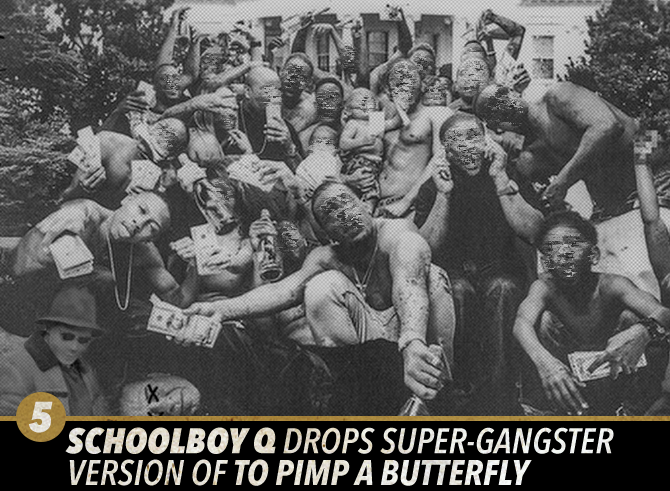 ScHoolBoy Q has stepped out of Kendrick Lamar’s massive shadow over the past few years and proved that he can stand on his own two without his immensely talented rapping friend. With Blank Face, Q crafted something as musically inclined as To Pimp A Butterfly but it was hella, hella, gangster. It’s can be explained best as the evil twin of K Dot’s album and easily belongs in the pack for best hip hop album of the year. It also shows off Q’s growth as an emcee. From the cloudy stream of conscious on “Black THougHts” to the brilliant storytelling on “JoHn Muir,” this is Q at his best. — Andreas Hale 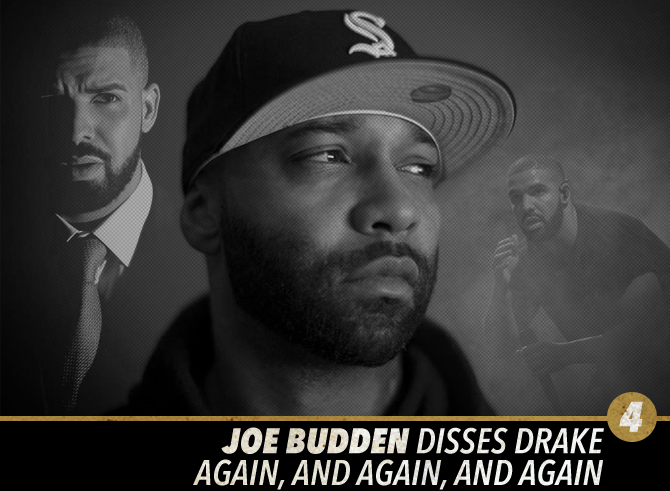 It all started when Joe Budden said what a lot of Drake fans were thinking about the 6 God’s album Views: it was the same ol’ Drake. But Drake clearly didn’t take too kindly to Budden’s opinion and let off a thinly veiled diss. Well, this isn’t Meek Mill and he didn’t have to wait long for a response. And he got one, then another, then another, then another. And all of them were rather potent. Budden fired off “Making A Murderer,” “Wake,” “Afraid” and “Just Because” in rapid succession and in between Drake took a shot on French Montana’s “No Shopping.” However, everyone knows that Budden is a rhyme animal and can do this all night. Hell, he said so on The Brilliant Idiots podcast. But will Drake really step down from his lofty perch as the hottest in the game to go toe to toe with Joey? — Andreas Hale 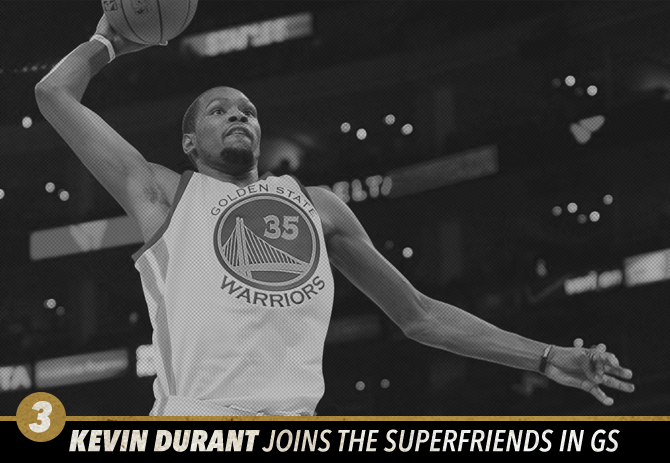 There were a few big moves in the NBA free agency this year, but none more stunning than Kevin Durant leaving the Oklahoma City Thunder to play for the Golden State Warriors (the very team who sent him home in the playoffs). But as crazy as it is, the more you think about it, KD playing for the Warriors was the only option the DC-bred superstar had. I mean, how else was he going to get Lil B to drop that pesky curse? Still, the pressure on the new big-three (or four?) will be as high as ever next season, so we’ll have to wait and see how the newly-formed superfriends make out. — Shake 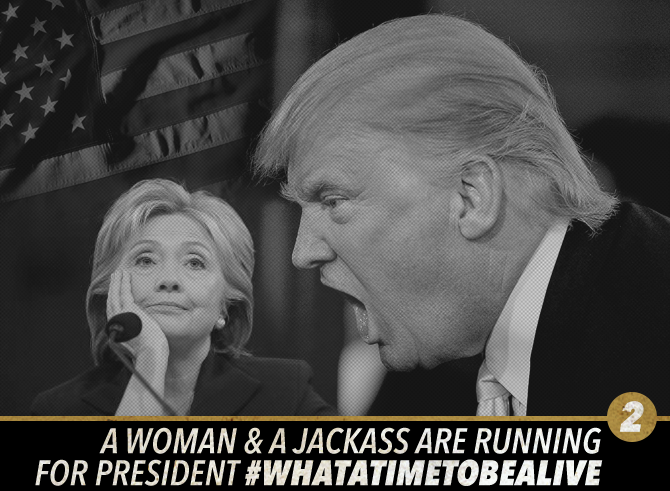 I’m pretty terrified of my future. Never mind my personal problems, as we all have them, but I’m fearful that after nearly eight years of fragile balance everything will be unraveled when America is forced to choose between Hilary Clinton or Donald Trump.

(Yes, I know that there are other candidates, but let’s be real: when was the last time you saw a Whig, Federalist, Libertarian, or Green Party President?)

The Democratic and Republican National Conventions came and went, and both were strikingly different spectacles. The DNC was marred by yet another email controversy with disgruntled Bernie Sanders supporters marching out of the convention in droves, mixed with speeches from Michelle Obama, Cory Booker and Joe Biden among others. The true highlight, however, was the impassioned speech from Khizr Khan, father of a slain Muslim American soldier who was killed in Iraq. Meanwhile, the RNC was a dark, fear-inducing affair with Black sheriffs screaming “Blue Lives Matter,” an all-over-the-place and long-winded diatribe from Donald Trump, and Trump’s wife Melania outright snatching extended portions of Michelle Obama’s speech from 2008.

Whatever happens within the next few months will determine the path of the US for years to come. However, things will never be the same after January 20th, 2017. — Meka Udoh 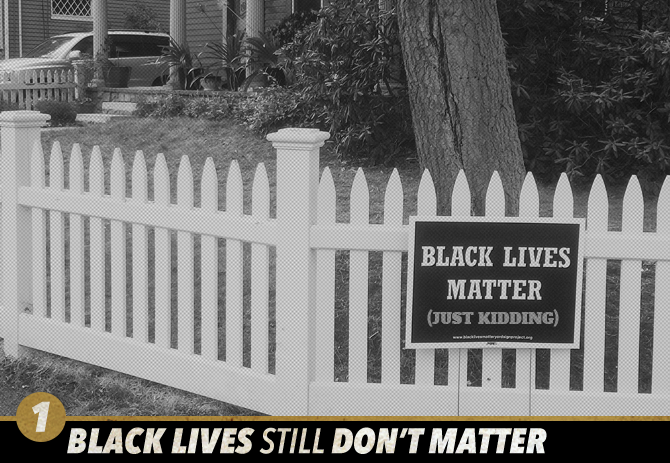 We’re more than midway through 2016 and it’s just getting worse. When I was a kid, I assumed it couldn’t get any worse than watching a black man getting beat up by police on video. Boy, was I wrong. In July we saw two instances of black men being murdered on camera by police. Police — for what doesn’t appear to be an offense that nobody deserved to be murdered over — sadly took down Alton Sterling and shot him at close range to the horror of us all. The chilling visual of him bleeding out on video should have been a sobering reality that things must change…quickly. But if there was any doubt to that notion, Philando Castile’s death certainly sealed the deal. Video taken by his girlfriend Diamond Reynolds shows Castile bleeding to death after a cop shot him out of fear. Castile told police he was carrying a firearm yet was gunned down when he was asked to hand over his wallet. It was a disgusting reminder that racism is alive and well and is showing no signs of slowing down. The outrage reached toxic levels but most remained in peaceful protest in the aftermath of these haunting events.

If there’s any doubt that we have a problem with police and African Americans, look no further than Charles Kinsey. Kinsey worked at a nearby care facility and was in the process of helping an autistic patient who wandered away from the building. He had his hands up while the patient played with a toy truck. But the cops shot him anyway. Fortunately, Kinsey didn’t die.

Oh yeah, and the cops that murdered Freddie Gray got off.

All in all, it was a shitty month to be black because we were reminded again that our lives do not matter.

While Trump and Clinton run around talking about all of the things wrong with each other, the fact of the matter is that something needs to be done about this problem. It can’t be pushed to the side any longer. Sure, I appreciate Clinton bringing up the mothers of African Americans killed by police but I don’t want to see her (or Trump) get in office and totally forget about us like most politicians do.

Or else… — Andreas Hale 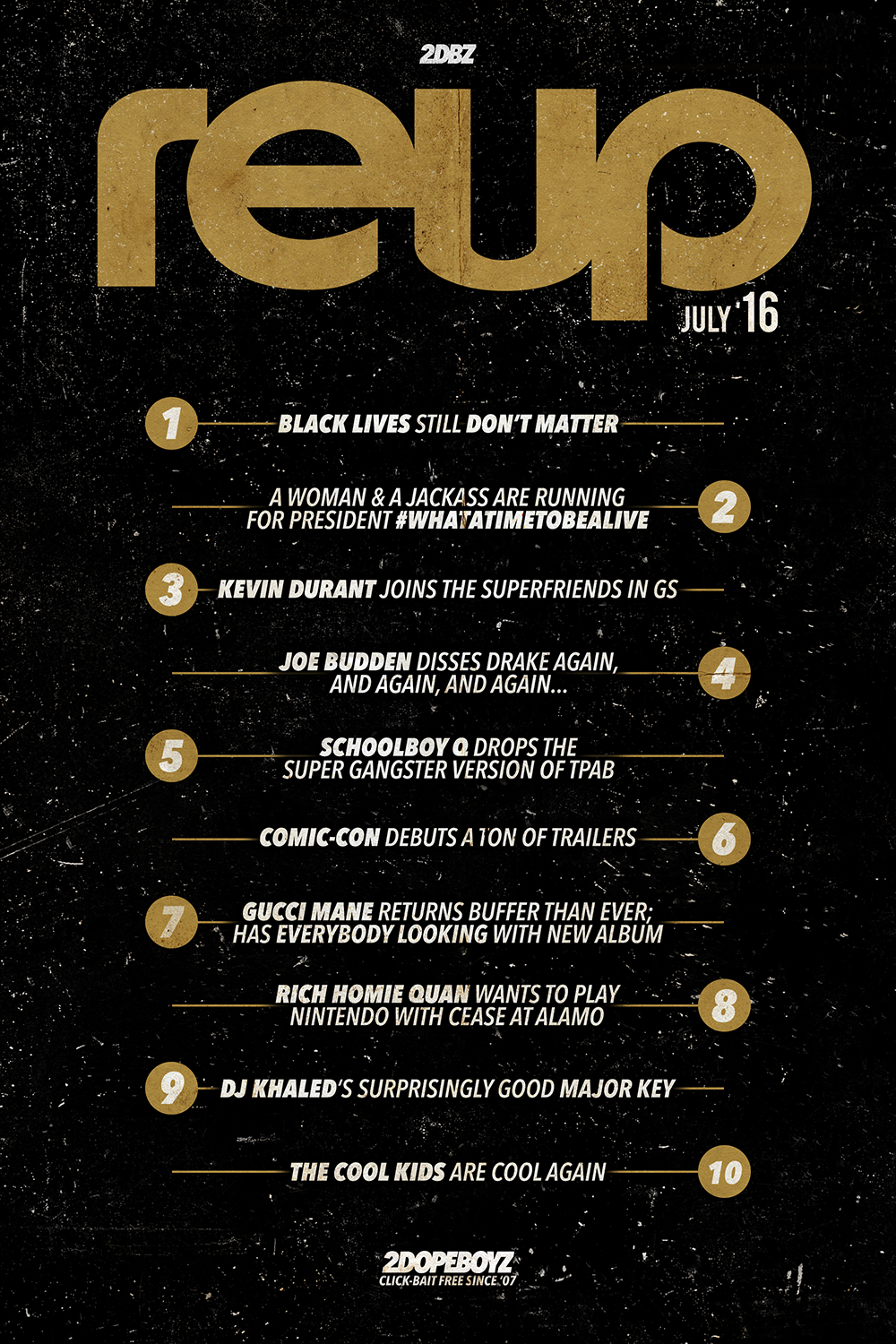